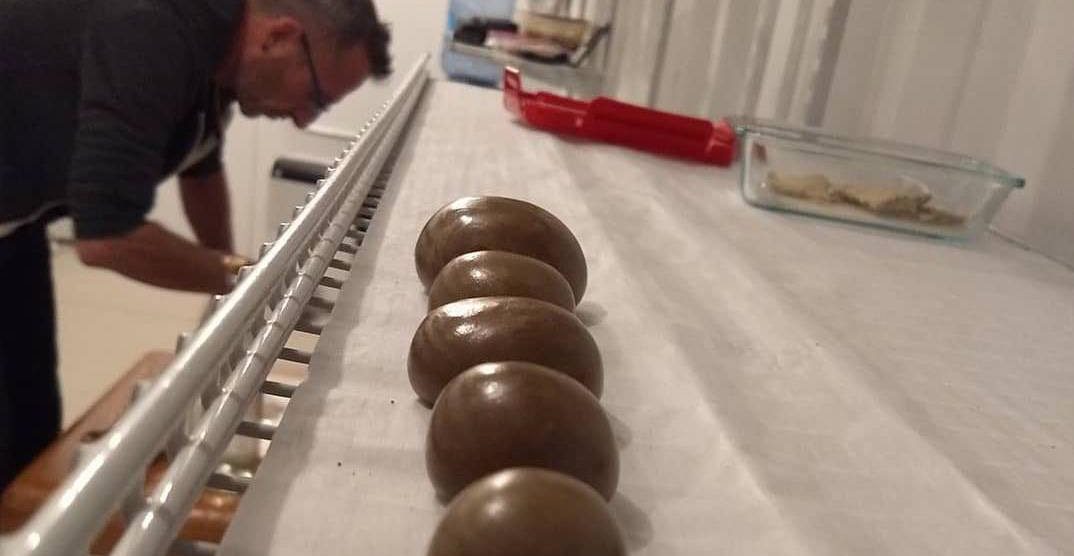 Hashish is a lot of things.

A concentrate of cannabis resin, a powerful method of delivering THC into your blood via the airway, a traditional way to consume the drug, a medicine, an intoxicant, and in most of the world, still a crime. The litany of definitions, adjectives, and monikers the substance wears are seemingly as numerous as the methods used to create it.

Traditional hashishins in the Himalayas of India use their hands to slowly massage the resin out of the plant. The sticky substance builds up on the harvesters’ palms, which is in turn compressed between skilled fingers into charas, a coveted creation in much of the world. In Morroco, aged cannabis plants are placed in a bowl and beaten to separate the “kif” from the plant. From there, compression creates the always in-demand black hash, some of the best in the world.

One dedicated hashishin’s work reflects both on modern advances while adhering to traditional methods of forging the substance. Going by the nom du cannabis Frenchy Cannoli, a nickname partly picked up during his travels across the world learning about hash production, the Nice, France native has elevated his love for the world’s original cannabis concentrate into a pure, intoxicating art form.

“I’ve been smoking hash all my life. I spend 20 years of my life travelling in producing countries,” Cannoli told Grow. “It’s a product that has really helped me all my life, even if I didn’t know it was a medicine when I was younger.”

A bath of ice

Cannoli creates ice water hash. The method uses a cold water bath to detach the trichome heads from its stalk and the cannabis bud by agitating them in the water. Trichomes are extremely small nodules of resin that contains all the major cannabinoids associated with the health and intoxicating effects of the plant.

While not the first person to use this method, Cannoli’s ability to produce such a perfect and beautiful product is rooted in his attention to detail, and the quality of the product he uses. His obsession with cleanliness is a defining feature of his own particular methodology.

For Frenchy, the difference comes when it is time to strain the resin from the plant matter.

“When you dry sieve, your problem is cleanliness because the dry brittle material creates contaminants, material contaminants. The more you sieve the more contaminants you create,” Cannoli explains. The process allows him to agitate his cannabis material multiple times without any fear of contamination, leaving the finest unspoiled resin that can be compressed into hash.

From seed to sieve

Beyond his methods, Frenchy credits his ability to produce such a high-quality product to the work of the farmers who grow the plant. Like a winemaker who starts with the highest quality of grapes, Cannoli builds close ties to his growers. His detailed and intricate knowledge of plant cycles, combined with the trust he places in his producers allows him to harvest buds from crops when the plant is at its peak potential.

“I will work with home grown product mostly and I work particularly with the farmer. I know the plant, I know the field, I’m there to understand,” he says about his methods. “I have to understand the whole life cycle of the plant to share with a bit of it together be able to work better with the end of the product.”

As a young man, Cannoli says smoking hash connected him to faraway places he’d never seen. Inspired, he spent decades travelling to learn from traditional hashishins. Gaining what he calls the “tools” from traditional practitioners.

Adapting and learning, the result has been something decidedly more modern.

The end result is now often what have become his signature balls of hash. While hash is usually found in rough, chalky blocks, a product from Frenchie Cannoli is defined by its incredible smoothness and uniform shape.

Canolli’s success is pinned to the inscrutable quality of his work. He’s also successfully managed to harness a brand based around his ability as an artisan and an individual. A product like his may speak for itself, but that doesn’t mean a listener should deny themselves the please of his voice.

His pleasant and bubbly disposition doesn’t hinder the passion or knowledge he espouses through a soothing thick French accent. Spending years nicknamed Frenchy by his fellow travellers, he embraced this concentrated identity, adding Cannoli as a surname later — taken from the rolled-up shape of some of his hash creations that resembled the dessert. His personal brand of products even bares the slogan “100% ouh-la-la.”

Cannoli has spent decades creating hashish, and rooted his philosophy about the drug in science, experience, and artistry. He has written extensively about his travels as a younger man, and continues his journey, now offering seminars and classes on the lost art of the hashishin. He’ll be in Canada in September to attend the Grow Up Conference in Niagra Falls.

And while a long-standing proponent of tradition, Cannoli hasn’t shied away from learning new thing in his field.

“That’s was pure my generation. We didn’t have any data on cannabis whatsoever for years,” he said of his own recent experience. “I’ve got 20 years travelling and producing comfortably I was good with the tool, but had no idea the product I was working with. I was totally ignorant.

“I didn’t know what was a cannabinoid.

“From one day to the other I discovered, new alternate world. and its that dedication to learn what a trichome was, how does each cannabinoid form inside. To absorb as much data on the product that I was working with. I became much better at the craft I had been doing for 40 years.”