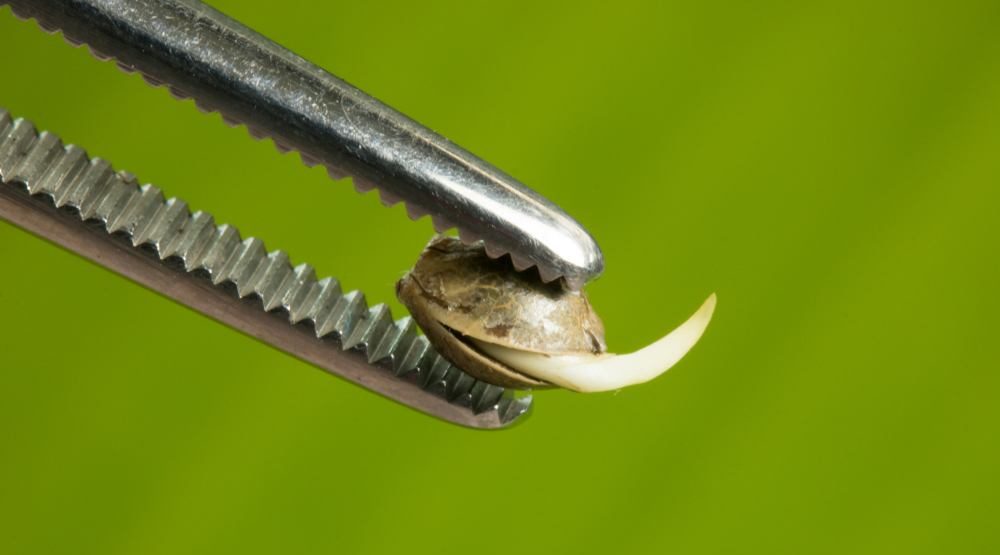 It’s morning in New York City, and Jessica Mellow is preparing for a long day. She pours her first of many cups of coffee and steels herself for another day of work — and another day of anorexia treatment. Not only does the body-paint model have a long session booked, she also has an appointment with her psychiatrist, and dinner with a meal-support specialist. She takes some cannabidiol (CBD) oil to help calm her nerves. Her anxiety is ever-present.

“I’ve found that when I use a bit of pot or take some CBD oil, it helps with anxiety and pain, and helps me get to sleep, sans side effects,” Mellow said. “Treatment for anorexia is trickier than for a lot of mental illnesses, largely because it requires doing the exact opposite of what feels safe and instinctual. If the brain perceives food as a threat, but the only way to get better is to continuously eat, the anxiety increases drastically, and as treatment goes on, often gets worse instead of better.”

Anorexia isn’t a qualifying condition for a medical marijuana certification in New York, even though a review of studies has shown cannabinoids can decrease anxiety and promote weight gain in anorexic patients.

Mellow, for one, is eager for more anorexia treatment protocols. “I think it would be really helpful to have [legal] cannabis as an option,” she said.

Despite what TV movies depict, eating disorders don’t just stem from a drive to be thin. Some people are born with a genetic predisposition to anorexia, bulimia, and binge-eating disorder. Further, the intrusive thoughts that often plague sufferers are similar to those of obsessive-compulsive disorder (OCD).

According to the National Eating Disorders Association (NEDA), “two-thirds of those with anorexia [show] signs of an anxiety disorder (including generalized anxiety, social phobia, and obsessive-compulsive disorder) before the onset of their eating disorder.” These comorbid conditions are only part of the reason anorexia is notoriously hard to treat.

Restrictive eating disorders such as anorexia and avoidant/restrictive food intake disorder (ARFID) can lead to progressive starvation that affects the brain, and therefore the intellect, making treatment for these patients even more challenging. Critically ill anorexic patients may want to eat, and want to recover, but may feel trapped in ritualistic thoughts and behaviours.

Bulimia and binge-eating disorder present a different but similar set of challenges, and symptoms of these disorders often overlap with anorexia symptoms. Binges can last for hours and result in the consumption of tens of thousands of calories. People with bulimia or binge-eating disorder can be of a normal weight or very overweight. Bodyweight doesn’t change the severity of the disease, but due to the risk of starvation or heart failure, anorexia remains the deadliest of all psychiatric disorders, with an estimated mortality rate of 10%.

Eating disorders and the endocannabinoid system

The endocannabinoid system (ECS) is a network of receptors, enzymes, and endocannabinoid molecules that maintains homeostasis, or a range of healthy functions in the body. The CB1 receptors, found in the central nervous system, transmit a “calm down” signal to overactive neurons. Because these receptors are plentiful in brain regions that control food intake, clinical evidence suggests that there may be a link between a defective ECS and the development of an eating disorder.

The ECS is involved in the regulation of eating and energy balance, and CB1 receptors — one of the two kinds of cannabinoid receptors in our brains, the other being the CB2 receptors — are plentiful in the brain regions that regulate hunger and control eating behaviours. Because of the way they bind to CB1 receptors, ingested cannabinoids can help reduce patients’ anxiety and increase (or decrease, in the case of high-CBD strains) the amount of food they consume. What stoners have long known to be true turns out to be backed by science: Cannabis can chill you out and give you the munchies.

“Cannabis helps me in two ways. First, it helps with hunger cues,” Cassidy said. “When you’ve been restricting for a while, your body stops asking for food when it needs to. The munchies help with that. Second, [cannabis] helps with the anxiety. It kind of quiets the wave of negative self-talk that often comes with eating.”

Anorexia sufferer Cassidy, whose name has been changed agrees. “Cannabis helps me in two ways. First, it helps with hunger cues,” Cassidy said. “When you’ve been restricting for a while, your body stops asking for food when it needs to. The munchies help with that. Second, [cannabis] helps with the anxiety. It kind of quiets the wave of negative self-talk that often comes with eating.”

What all these statistics mean is that people with eating disorders — especially the restrictive type — often operate according to a strict set of rules that may not make sense to people without eating disorders. For example, a person with anorexia may deem foods “safe” and “unsafe” based on reasons other than calories or nutrient content, or develop rituals around how they cut food and where they place it on the plate. It’s not so different from having to turn the lights on and off a certain number of times before leaving the house, or having to wash one’s hands a certain number of times before going to bed, behaviours typically associated with OCD.

In a 2019 study published in Cannabis and Cannabinoid Research, researchers from the New York State Psychiatric Institute at the Columbia University Department of Psychiatry found preliminary evidence that suggests the body’s endocannabinoid system may play a role in OCD, and cited case reports from three patients for whom the cannabinoid drug dronabinol reduced compulsive behaviours. One patient, who displayed treatment-resistant OCD symptoms following a thalamic stroke, was able to participate in cognitive behavioural therapy (CBT) after using dronabinol. While more research is needed, this preliminary evidence suggests that cannabis-based treatments may allow patients struggling with compulsive behaviours to more effectively participate in talk therapy. In addition, a 2005 study showed that rates of the endocannabinoid anandamide are increased in patients with anorexia and binge-eating disorder, but not in patients with bulimia. The possibility of modulating the endocannabinoid system to treat certain eating disorders deserves more research.

Scientific studies of patients with HIV and cancer show that cannabis increases appetite and can lead to significant, life-saving weight gain. However, established eating-disorders treatment programs have been slow to accept the medical efficacy of cannabis.

Fortunately, clinicians such as Dr. Ziv Cohen, a psychiatrist in New York City licensed to certify patients to the state medical-marijuana program, think it could be a helpful addition to eating disorder treatment protocols.

“I think that there is a lot of promise in cannabis-based products for restrictive eating disorders in the same way that cannabis products are very helpful for cancer patients who have problems with their nutrition,” Cohen said. “Anxiety is reduced and appetite is increased, and that combination can kind of push patients over the hump and get them to eat things that they wouldn’t normally eat, or that they’re phobic about.”

Cohen stressed that not all patients with eating disorders are good candidates for cannabis medicine; comorbidity is an important consideration. Inducing uncontrollable munchies in patients who purge has obvious consequences, but for patients with trauma histories who restrict or binge in response to post-traumatic stress disorder (PTSD) triggers, Cohen said cannabis could be helpful.

“We want to make sure we’re not conditioning the patient to only be able to eat when they’re using a cannabis product; just like with other medications, we would want [cannabis] to facilitate developing regular eating habits, not to become a ritual that is necessary [in order] to eat,” Cohen said. “Cannabis treatment could be very helpful, as long as it’s within the context of a good multidisciplinary team.”

Mellow agreed, and stressed the importance of her treatment team and the need for alternatives to psychiatric medications.

“Malnutrition can prevent psychiatric medications from being effective, so having [cannabis] to help with the anxiety could potentially make a treatment that often feels punitive much more tolerable and effective,” Mellow said.

“I don’t believe there’s any miracle cure,” Mellow said, “but if cannabis can reduce some of the biggest barriers to treatment — exhaustion, anxiety, physical discomfort — that leaves more room to focus directly on recovery, and I don’t see how that could be anything but positive.”