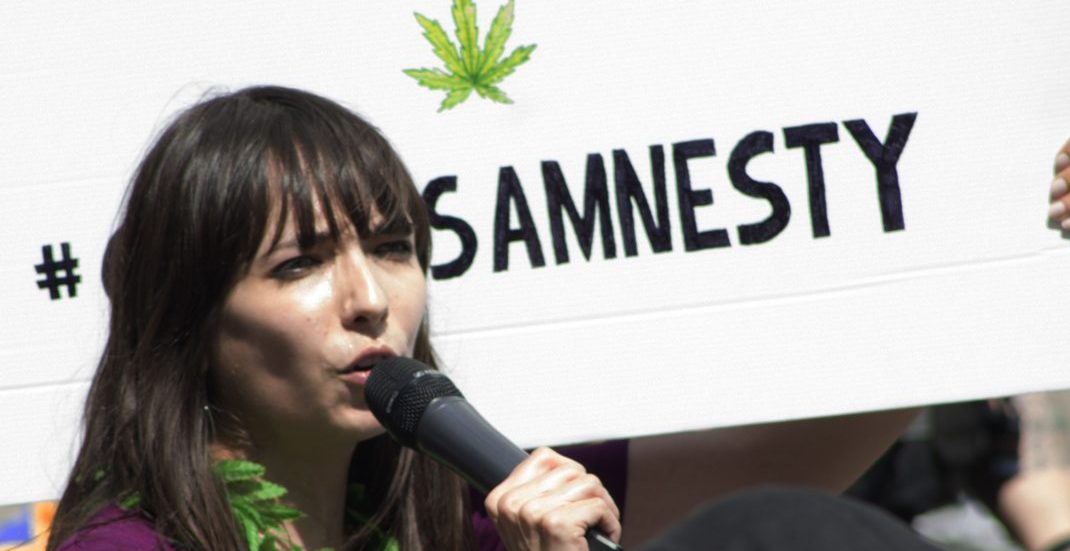 There is a war of words being waged online between two of Canada’s leading pot advocates and business-women.

Emery has accused Roach of dismantling her plans to open a cafe in Toronto’s busy Kensington Market. According to Emery, she was collaborating with Sam James, a Toronto coffee shop entrepreneur, to open a cafe in the market under the name, “Jodie’s Joint,” until pressure from Roach and her supporters put an end to the deal.

Heartbreaking news to share. My dream of a “Jodie’s Joint” cafe has been killed by Lisa Campbell & Abi Roach, and their cruelty and intentional lies. My dream was to open my own independent business based on coffee, which I love almost as much as cannabis: https://t.co/hqBPw1uwza

The plan was reportedly to sell hemp-based snacks, but according to Emery, nothing containing cannabis. Products would be sourced locally from the market and GTA businesses when possible.

The location would have replaced the soon-to-be closed Casa Coffee, which will shutter at the end of this month.

“Everything was underway,” said Emery, speaking to Daily Hive  over the phone. “We were taking over on the first [of June].”

“I have designs, we were taking over the space.”

“The idea was you buy a latte and walk across the street to Abi’s to smoke pot.”

With the public announcement soon approaching, Emery says she messaged Roach, a long-time supporter and advocate for access to medical cannabis. She has run the Hotbox Lounge, a head shop, smoke lounge, and Kensington market fixture for nearly 20 years.

In text messages exchanged between the two, published by Emery on Facebook, Roach called the plans the “opposite of positive” and “predatory.”

Emery alleges that James was pressured by Roach and her friend and fellow activist, Lisa Cambell, to drop the business.

Roach, speaking with Daily Hive via text, says she took issue with the business’s proximity to her own but denies doing anything to tank the deal.

“She could open anywhere in Canada, she did not need to be 10 feet away from my business.”

Roach says Jodie’s reaction on social media scared James away. In her own social posts, Roach shows messages allegedly from Emery that indicate a plan to open a Tokyo Smoke – a Toronto high-end headshop – style business.

“She created a psychotic social media rampage which cost her the opportunity. The partner felt that the Emery drama was not good for his brand.

“I had nothing to do with ‘ruining her business.'”

Roach has since the deleted it from her account.

“In my anger I copy and pasted a post. This I erased and apologized for,” says Roach.

The screenshots of their conversation show Emery’s long explanations about her new business being met with curt, short answers. Throughout, Emery denies being a competitor saying she’d only be selling branded ashtrays and rolling papers, but nothing to directly compete with the Hotbox.

“This huge text is followed by a call from her financial backer essentially berating me,” says Roach.

“This is clearly a PR stunt … to create a social media frenzy about her new business venture. I’m sure she will be very successful and I wish her the best of luck.”

Since then the two have continued the exchange over Twitter. Roach has denied ever meeting with James to influence their agreement while Emery claims otherwise.

Daily Hive reached out to James who would not comment on the specifics of the deal but said he is no longer moving forward with any plans for that location.

“I have nothing to do with it anymore,” he said over the phone. “I was consulting on a project but after all that kind of stuff went down, I don’t want to be involved in it.”

Both parties have continued to blame the other, but have maintained a semblance of respect for each other.

“I really do like Jodie,” says Roach. “I just can’t take any more of the harassment. 1000 tweets is my limit.”

“Abi has been a friend of mine since I started activism in 2004,” says Emery. “For 14 years I’ve looked up to her and respected her.”

Emery has remained active on Twitter regarding the issue, but has yet to discuss future plans for Jodie’s Joint at a different location.