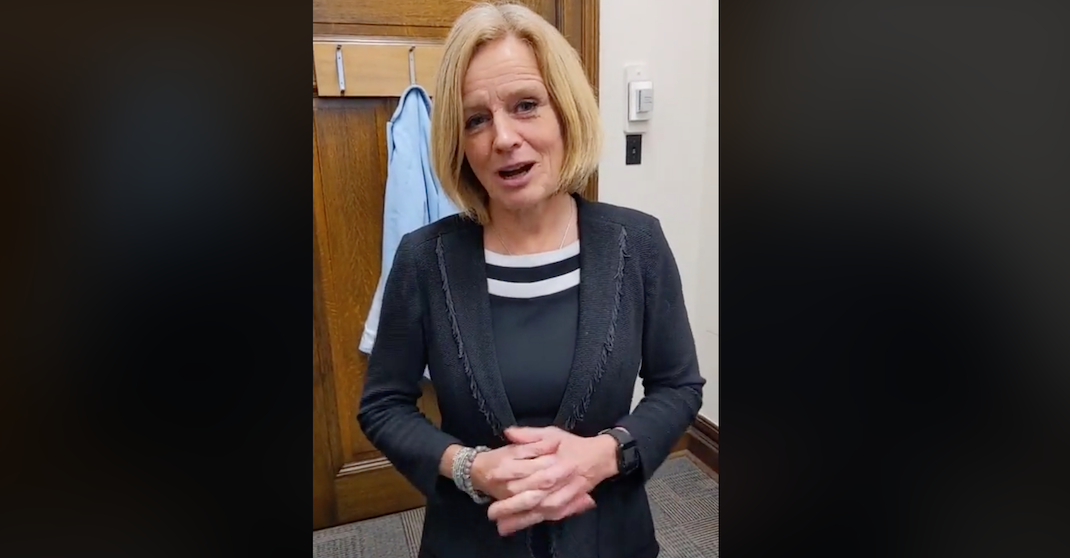 Leader of the official opposition, Rachel Notley was removed from Alberta Legislature this afternoon by the house leader.

The situation started, Notley says, when she refused to apologize to the house leader for comments she made related to Bill 22, and was then kicked out.

“The leader of the opposition knows full well that she can’t make a statement like ‘the government house leader is misleading the house.’ She can apologize and withdraw,” said House Leader Jason Nixon.

“I will not apologize until we have fully canvassed the destructive nature of this bill,” said Notley in rebuttal.

Nixon then said she was no longer permitted in the assembly for the rest of the day for not “following the rules of the house.”

In a video posted to Facebook shortly afterwards, Notley explained the situation from her perspective.

Notley is referring to Bill 22: the Reform of Agencies, Boards, and Commissions and Government Enterprises Act, which would move the Office of the Election Commissioner’s “obligations, liabilities, powers, and duties” to that of the Office of the Chief Electoral Officer instead.

Alberta’s Elections Commissioner Lorne Gibson has been investigating the United Conservative Party’s leadership contest on allegations of fraud, and will likely be fired with the introduction of the new bill.

“I was very forthright that I see bill 22 as being a fundamental, existential, threat to the health of Alberta’s democracy,” said Notley in the video.

“It allows for the premier to threaten and bully and intimidate anybody who stands up against him and says that he has to follow the same laws that the rest of us have to follow.”

According to the UCP government, however, the logic behind Bill 22 is quite different.

“If passed, Bill 22 would eliminate unnecessary government spending, improve the efficiency and oversight of public agencies and increase the value of taxpayer investments,” says the Province of Alberta website.

“Our government promised Albertans we would live within our means,” said Travis Toews, President of Treasury Board and Minister of Finance, in the release.

“Bill 22 ensures publicly owned enterprises and agencies, boards, and commissions provide the best value to the taxpayer and deliver the results Albertans expect.”

“The laws in question are the very laws that got us into office, the laws around our elections. and the commissioner, whose been fired, is the guy whose been hired to keep us honest in terms of how we get into that legislature building. As far as I’m concerned, we must stand up against this abuse of power. This has never been done in any jurisdiction anywhere in Canada,” she said.

“I love our province and I care about our democracy, and I know you do too. So speak out.”