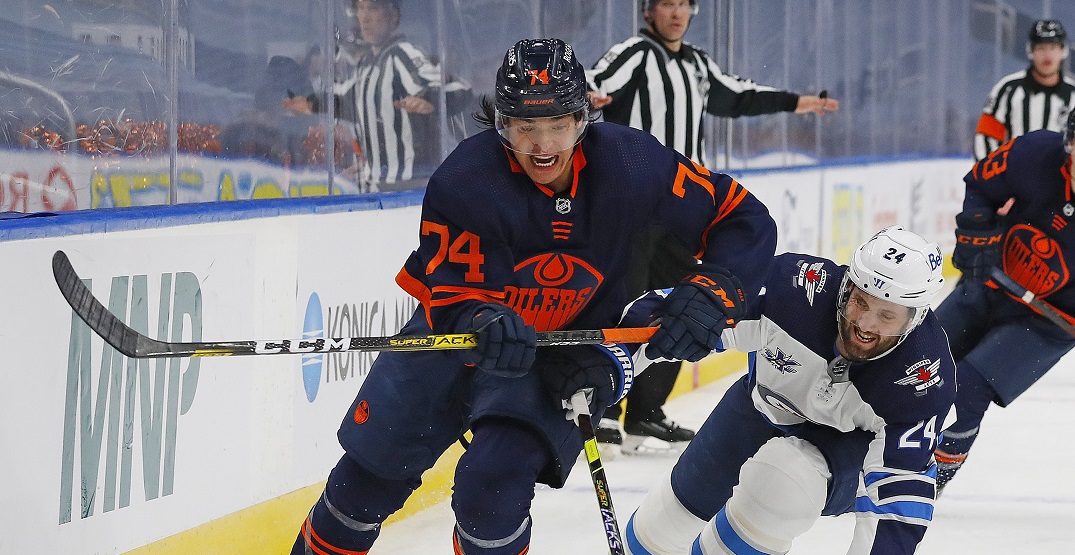 Following a series sweep by the Winnipeg Jets, Edmonton Oilers defenceman Ethan Bear was the victim of racist comments online.

“Ethan has received numerous racist messages and comments,” Bear’s girlfriend wrote in a post on her social media.

Bear, who is of Cree descent, was raised in the Ochapowace Nation near Whitewood, Saskatchewan.

“To hide behind a screen is cowardly,” she continued. “But to use stereotypes against him as an Indigenous person is dehumanizing and awful!!

“We will not be silenced. We will not [accept] this behaviour. It is 2021 we are all equal and this needs to stop.

“Ethan has broken countless barriers an Indigenous man to make it to the NHL. We understand there is room for criticism but there is no for racism.”

The statement was shared below by Edmonton City News reporter Courtney Theriault.

Ethan Bear's girlfriend shared this post after she said he received racist messages on his social media – adding that he appreciates the love and support from everyone else. #yeg #oilers #LetsGoOilers pic.twitter.com/7uwHShsHlj

Oilers fans and the larger hockey community were quick to show support for Bear:

Well said, Andrew.
Beyond terrible and unacceptable that Ethan Bear should be subjected to that.
Let's support Ethan Bear ! https://t.co/pdf06AyAX4

Ethan Bear is the absolute coolest. This is not debatable. pic.twitter.com/pTovJ9P28o

Appreciation Tweet! Ethan Bear is an inspiration. He is a huge contribution to the team and I am proud he is an Oiler! Only great things to come for you and the Edmonton Oilers. Ethan you're a valid member of the team and community. #TeamBear pic.twitter.com/sTxSYgAfBN

This is my favourite player on the Edmonton Oilers since Esa Tikkanen. When one of my little boy’s hockey coaches said my kid plays a lot like Ethan Bear, that was a nice compliment. So this is my Ethan Bear appreciation tweet. pic.twitter.com/DW3wUSQj21

Note: Out of respect for her privacy as a non-public figure, we have left Ethan Bear’s girlfriend’s name out of the story.