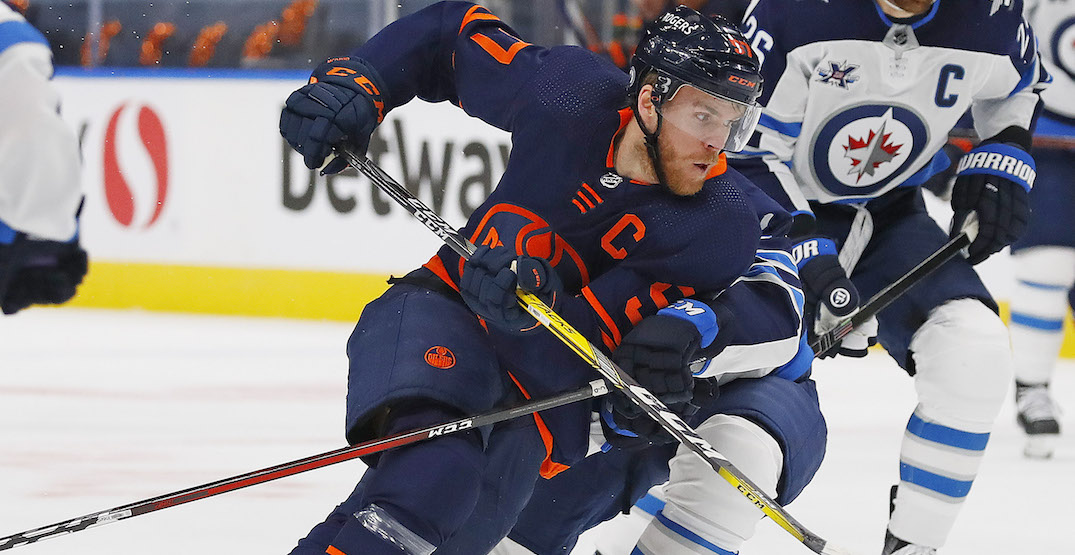 Not the start they were hoping for.

The Edmonton Oilers scored first but couldn’t solve Connor Hellebuyck a second time, losing 4-1 in Game 1 against the Winnipeg Jets.

Connor McDavid was held pointless with just two shots in 23:14 of action on Wednesday, marking the first time all season he failed to record a point against the Jets. In fact, he recorded at least two points in all nine of those regular season games.

McDavid should bounce back – he only went multiple games without a point once this season – but the Oilers will need other players to pick up the slack when #97 does have a rare off night.

Despite not playing up to their potential, the Oilers actually outshot the Jets 33-22 and had their share of chances to win the game. Hellebyuck was a difference-maker, and the Oilers will need to figure out ways to make life more difficult on the reigning Vezina trophy winner as the series continues.

Game 1 seemed to have a tentative feel throughout the first half, with neither team wanting to give their opponent the edge by making an early mistake.

Eventually it was Jesse Puljujarvi who got the opening goal of the series halfway through the second period, picking up a loose puck in the slot and squeaking it under the arm of Hellebyuck.

But the ‘pool party’ quickly went the other way when Tucker Poolman scored for the Jets, tying the game back up less than three minutes after the Puljujarvi goal.

The @NHLJets with a quick response and we're tied! 🚨#ItsOn pic.twitter.com/TgkP14n6xP

The Jets’ game-winning goal was scored in unusual fashion; the puck had gone in but play continued for several seconds until the arena horn blared to signal a goal.

Dominic Toninato has the Jets up by one! #ItsOn pic.twitter.com/0X4csVKP9D

It was one of those greasy playoff goals scored simply by throwing a puck on net with traffic in front, and this shot happened to deflect twice leaving Mike Smith no chance to get a read on it.

The Jets added a pair of empty netters in the final minutes to secure the Game 1 victory.

The game only had one penalty – a high sticking penalty to Paul Stastny – and the lack of special teams likely worked in the Jets’ favour. The Oilers had the best power play in the league for the second straight season at 27.6%, and their penalty kill (82.5%) was also better than the Jets (80.5%).

It’s not all that surprising, but the differences in ice times shows the depth of the Jets’ roster. Minutes were spread very evenly amongst the Jets, with Josh Morrissey leading the team with 22:19, a number surpassed by four Oilers. Darnell Nurse played a game-high 28:18, nearly six minutes more than Morrissey.

The Oilers will try to even up the series in Game 2 on Friday. Puck drops at 7 pm MT on Sportsnet and CBC.