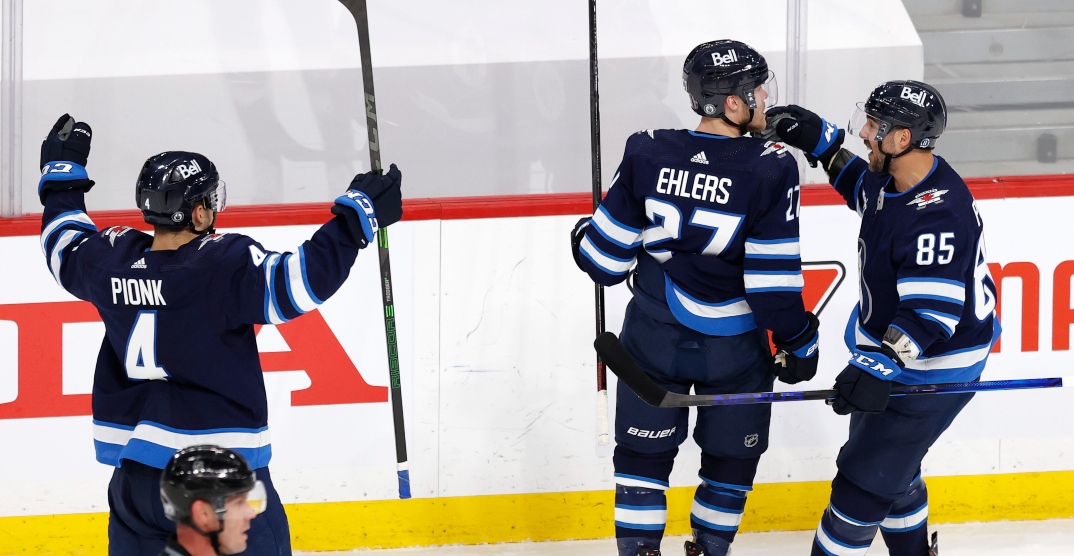 Nikolaj Ehlers’ second goal of the game gave the Winnipeg Jets a 5-4 overtime win over the Edmonton Oilers in Game 3, completing an incredible comeback from a 4-1 deficit in the third period and giving them a 3-0 stranglehold in the series.

Playing in his first game since suffering an upper-body injury on April 24, Ehlers also scored Winnipeg’s first goal of the game. With Edmonton up 2-0 late in the second period, Ehlers rifled a shot off the post and in on the power play.

The Oilers had taken that 2-0 lead thanks to Leon Draisaitl. The big story of the Oilers falling into a 2-0 series hole was that Draisaitl and Connor McDavid had both been held off the scoresheet. Well, at the 6:33 mark of Game 3, Draisaitl got Edmonton on the board — with McDavid picking up an assist.

Less than three minutes later, with the Oilers on a 5-on-3 power play, Draisaitl struck again.

He has two. The first isn't over. #LetsGoOilers pic.twitter.com/evJxgKDM2X

McDavid picked up another assist on Draisaitl’s second tally. Then after Ehlers cut into Edmonton’s lead, Draisaitl and McDavid teamed up to set Zack Kassian up to go back up by two.

Leon puts it on an absolute tee for Kass.

Early in the third, Jujhar Khaira deflected in a point shot from Adam Larsson and this one looked like it was all but over.

Jujhar Khaira's first of the playoffs puts the Oilers up 4-1 🚨#ItsOn | #StanleyCup pic.twitter.com/bzPS4NzHar

The Jets had other ideas, though.

With just over eight minutes to go, Mathieu Perreault put home a loose puck on the power play to pull Winnipeg back within a pair.

Frenchie on the doorstep!!

Can you imagine if there were fans in Winnipeg tonight?

In order to advance now, Edmonton will have to become just the fifth team in NHL history to come back from a 3-0 series deficit. The Oilers aren’t going to have much time to shake off this heartbreaking collapse, either. Sunday’s game was the front end of a rare instance of a back-to-back set of games in the playoffs for the Oilers and Jets.