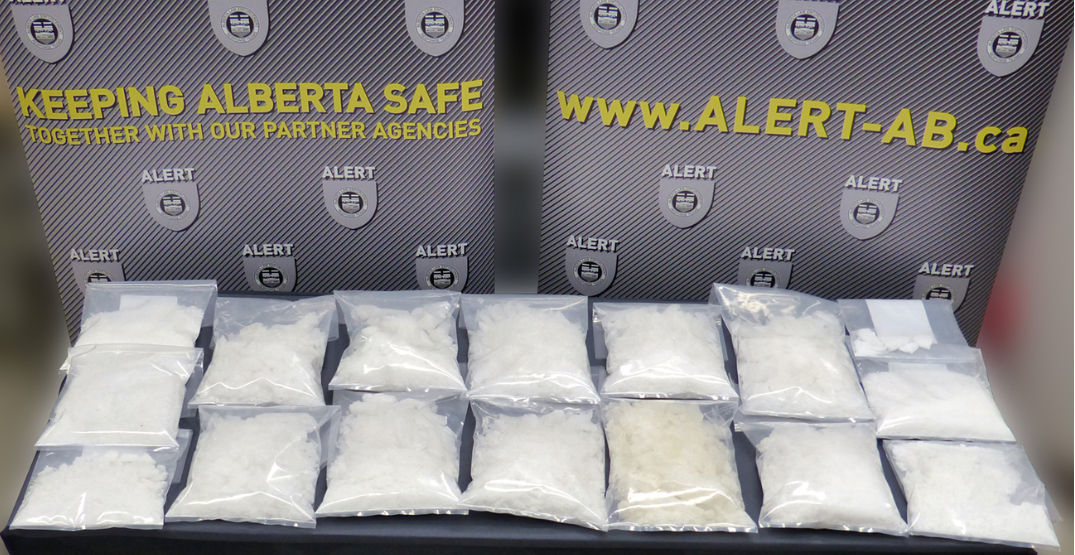 A “significant” amount of drugs, including nearly 14 kilograms of methamphetamine, has been taken off Edmonton’s streets.

ALERT Edmonton announced the seizure, which was part of a four-month drug trafficking investigation, in a release on January 8.

According to police, officer’s from the service’s organized crime and gang team made the recovery on December 30, after searching four homes in the city’s Summerside, Oliver, Strathcona, and Rosenthal neighbourhoods.

Inside one of the homes, police allegedly recovered 13.77 kilograms of meth. The drugs have an estimated street value of $1.35 million and would have equated to more than 45,000 doses.

“This amount of meth represents a high degree of community harm,”  said Supt. Dwayne Lakusta, the CEO of ALERT.

“The influx of cartel-connected meth into our province has fueled violence, ancillary property crimes, and poses serious health concerns.”

“ALERT has prioritized these types of investigations, and we are committed to disrupting the meth trade,” Lakusta said.

“Our investigators believe we hit the distribution point and stopped a lot of drugs from making their way to Edmonton and outlying areas,” said Inspector Kevin Berge of ALERT Edmonton.

The investigation is ongoing, and charges are pending. Anyone who suspects drug or gang activity in their community can call local police. To remain anonymous, contact Crime Stoppers at 1-800-222-TIPS (8477).