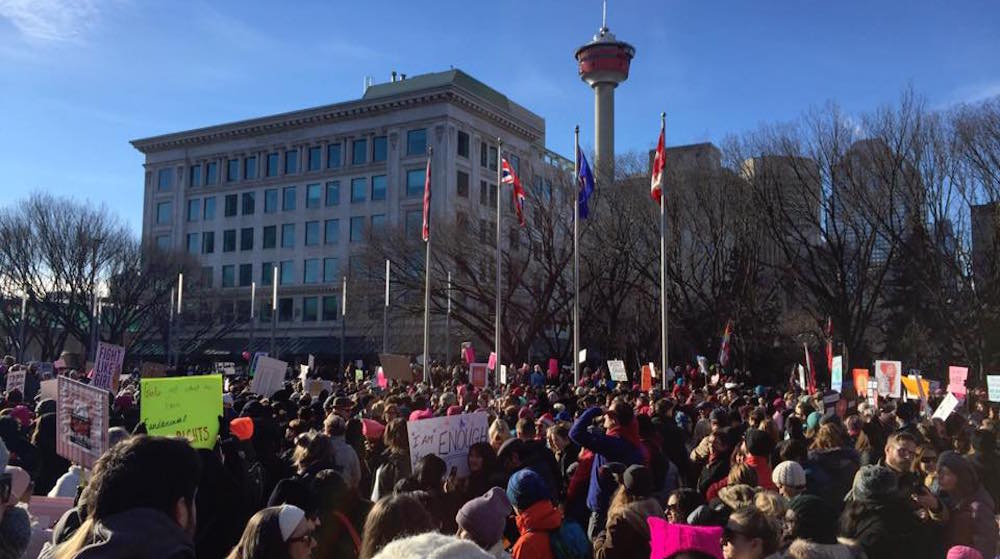 Around the world yesterday, people showed up.

In Washington, Boston, London, Paris, Oslo, New York, Sydney, and many, many more cities around the globe people showed up to participate in local versions of the Women’s March on DC.

The #womensmarchyyc garnered up to 4,000 people of supporters as they rallied in front of the Women are Persons Famous 5 statue by Arts Commons in downtown and marched down Stephen Avenue.

The march aimed to stand up to the kind of misogynistic rhetoric seen during the US election and was timed to coincide with Donald Trump’s first full day in office.

Here are more photos of yesterday’s event in case you missed it:

Both River & @deanehouseyyc are fuelled by girl power. Powerful, smart, independent thinkers constantly making moves for big change. Proud to be a part of this community & city. #justamarchinthepark

Today was amazing! I attended the Women's March with my mom and sister, (who frankly were my first 2 role models) and then found my friends @heatherbuchanan & @lmccarroll who had the best signs.

Building change on those who fought before us. Daughter celebrating the Famous Five including Nellie McClung. . Just thing month, she chose to learn about Nellie as a 'Great Canadian' for a school assignment. Today was a continuation of that learning in real life application and experience. No coincidence, we met at the Famous Five statue by the thousands and marched for women's rights, human rights, and equality. . #learn #learning #teach #teaching #parent #parenting #kids #daughter #women #womensrights #womensmarch #womensmarchyyc #humanrights #march #equality #experience #global #globalcitizen #yyc #yycblogger

Amazing turn out at the #womensmarch today! Girl Power!!✌️

While participating in the Women’s March today was inspiring, it also left me feeling ashamed. Ashamed that I haven’t seriously participated in any social justice issues and that it has taken me so long to actively question and dismantle my own privilege. I’ve spent the last couple of years reading, listening, educating myself and reflecting on my own inherent biases and attitudes, but today was a reminder that is not enough. That silence and inaction can be just as oppressive as blatant discrimination. I know I am late to the game and that these are just words, so I’m committing myself to action. I will not simply use my attendance at today’s march as another way to pat myself on the back for not being like “one of them” and instead use it as a jumping off point. Sorry it took me so long. I promise to do better. #womensmarch #womensmarchyyc #womensmarchcanada #equalrights #yyc