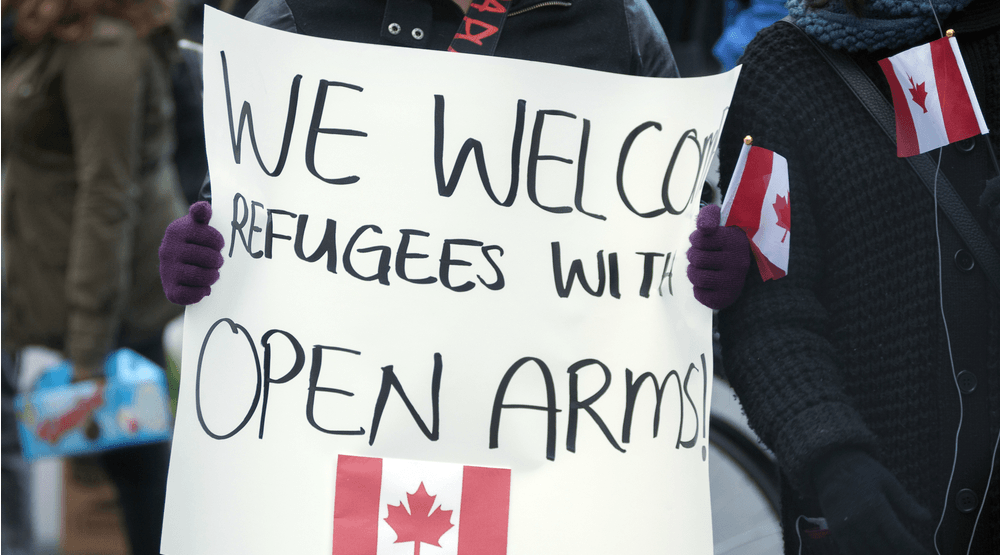 News this morning that under Donald Trump’s brand new administration the United States is gearing up to temporarily ban refugees and suspend visas for citizens of Syria and other Middle Eastern and African countries has been met with dismay by many observers. My heart sunk at the news, because I know that this ban will inevitably mean the delayed departure and potential death of innocent people who want nothing more than to escape the hell of war and destruction.

Reuters news reported late last night that Trump is expected to sign executive orders banning for several months the entry of refugees and blocking visas being issued to anyone from Syria, Iraq, Iran, Libya, Somalia, Sudan and Yemen. Meanwhile, however, and as a tiny footnote that few may have noticed, arms sales to Saudi Arabia continued as business as usual goes on.

The news signals a new era of severe protectionism and looking inward in the U.S. that has many worried. This unwillingness to react to a humanitarian crisis with empathy and compassion stands in sharp contrast with the approach our Canadian government has taken. While not perfect and without its criticisms, Canada’s decision to open its doors and its heart to Syrian refugees this past year has been showcased around the world as the perfect example of what more fortunate countries should be doing in reaction to human misery and people desperately in need of help.

Despite the fear mongering, the unwarranted speculation about opening the doors to terrorism (as if a terrorist is going to wait around in a refugee camp for a year and not just enter a country illegally to do damage), and the constant spreading of misinformation, Canada was able to show the world that you can be compassionate and welcoming and you can do so in a smart, responsible, and cautious way.

A year ago I wrote an op-ed piece trying to assuage people’s fears about Canada getting ready to accept Syrian refugees. It was a piece counteracting all the false narratives step by step. I’m happy to say that a year later I have been proven right.

As of January 2, 2017, 39,671 Syrian refugees have been resettled in this country. That’s no small feat! And this has taken place with the coordinated efforts of the Canadian government, working alongside private sponsors, non-governmental organizations and provincial, territorial, and municipal governments. We did it together.

Which begs the question: what has happened since we let in all these shady people? Has Canada been infiltrated by terrorists and attacked on its soil by ISIS members pretending to be Syrian refugees? No.

Have we seen an increase in lawlessness, violence, Sharia Law, and Kibbeh since Syrian refugees entered our country? Probably just the latter with a side order of Fattoush.

Has anyone been forced to wear a niqab or a burqa or pray to the Quran against their will since these religious extremists got off the plane? Nope, only Jehovah’s Witnesses keep knocking on my door.

What has happened in the past year, you ask? Brace yourselves and take a look.

A bunch of Canadians who were once refugees themselves opened their hearts and their homes to Syrian refugees. See their terrifying interactions here.

Syrian families were reunited thanks to a unique partnership between an Ontario synagogue and a mosque. Read about the cringeworthy way members of different religions came together here.

Not to be outdone, Muslim and Jewish Canadians in Saskatoon decided to do the same. Read all about how their collaboration spells the demise of Canada here.

Some people’s worst nightmares were confirmed when these Syrian refugees decided to build a successful business making – gah! – chocolate. If you don’t’ want to see the gruesome details don’t link here.

Here’s a compilation of heartwarming success stories compiled by CTV. I warn you they are joyful and hopeful and make my heart sing. Click here at your own peril.

In fact, so many of people’s nightmare scenarios and fears about refugees and immigrants came true in Canada this past year that the New York Times decided to make us a blatant international example by publishing an entire series on our wild, unpredictable ways. Let Canada be a cautionary tale, world! For all the depressing details on our Canadian approach, link here.

And while all the refugee-induced mayhem was happening around us, guess what else we decided to do? We kicked it up another notch and appointed Somali-born Muslim and once-upon-a-time refugee Ahmed Hussen as the nation’s Minister of Immigration, Refugees and Citizenship. For the entire disturbing story, you can link here.

Yes, I’m being facetious and tongue-in-cheek, but it’s the only way I know how to communicate my dismay and disappointment at our neighbours to the South. Yes, there is no perfect refugee program, yes there are problems and issues and setbacks and re-settlement (whether as a refugee or an immigrant) can be a complicated and often-difficult process. But watching Canada be on the right side of history, watching the overwhelming majority of Canadians open their hearts and their homes to people in need, and now, a year later, watching the results, which confirm what most of us already knew to be true, makes me immensely proud.

Trump’s approach is not only close-minded and hateful and regressive, it’s the exact opposite of what the United States has stood for over the course of its history.

“Give me your tired, your poor, your huddled masses yearning to breathe free, the wretched refuse of your teeming shore. Send these, the homeless, tempest-tossed to me. I lift my lamp beside the golden door.”

Not so much anymore.