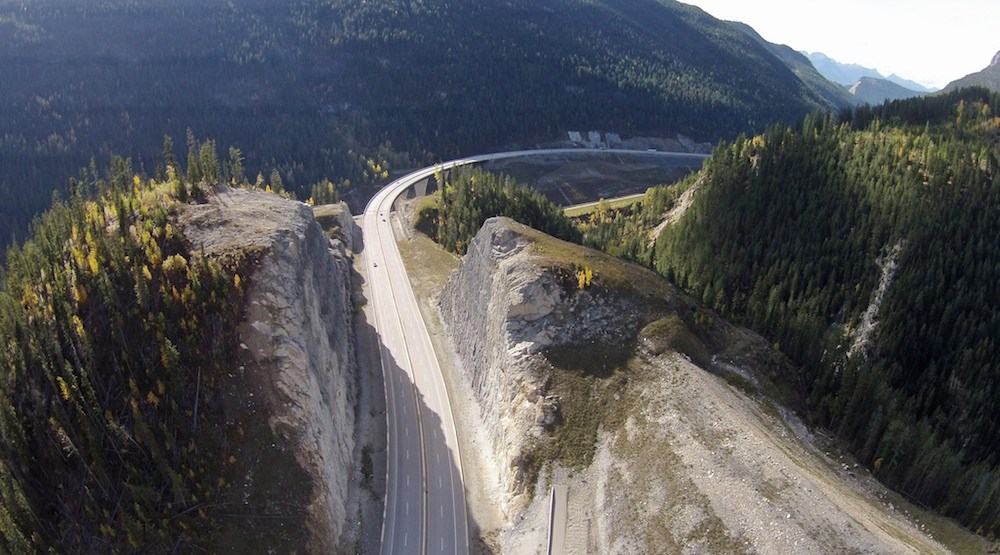 A narrow and dangerous section of Highway 1 through the BC interior will receive a much-needed upgrade funded by both the provincial and federal governments.

The Trans-Canada Highway through Kicking Horse Canyon near Golden will be realigned and expanded to four lanes with median barriers and widened shoulders, the provincial government announced today. This section of the route will also see new bridges, retaining walls, rock catchment ditches, and other measures to reduce the hazard of rock falls.

Additionally, the project includes improvements to the route between Donald and Forde Station Road through the expansion of the highway to four lanes.

Altogether, both projects will cost $469 million with the provincial government contributing $247 million and the federal government covering $222 million.

This section of the highway through the BC interior sees up to 12,000 vehicles per day, with 15% of the traffic being heavy trucks carrying between $24 billion and $32 billion worth in commercial goods annually.

“The Trans-Canada Highway is our province’s main connection between the Pacific Gateway and the rest of Canada, and the growth of our economy and communities depends on having a strong transportation network,” said Todd Stone, BC Minister of Transportation and Infrastructure, in a statement.

“These projects will help traffic move more safely and efficiently, communities will be better connected, and businesses can distribute their products efficiently throughout the province, as well as to our ports and borders beyond.”

Major upgrades to this area of Highway 1, one of the most scenic sections of the Trans-Canada Highway, began more than a decade ago under Premier Gordon Campbell’s tenure. At the time, the improvements included the construction of the Park Bridge over the Kicking Horse River between Yoho National Park and Golden.

Construction on the latest phase is scheduled to begin this year for a completion in 2024. When finished, approximately one-third of the Trans-Canada Highway from Kamloops to the Alberta border – a distance of 635 kilometres – will have four lanes.