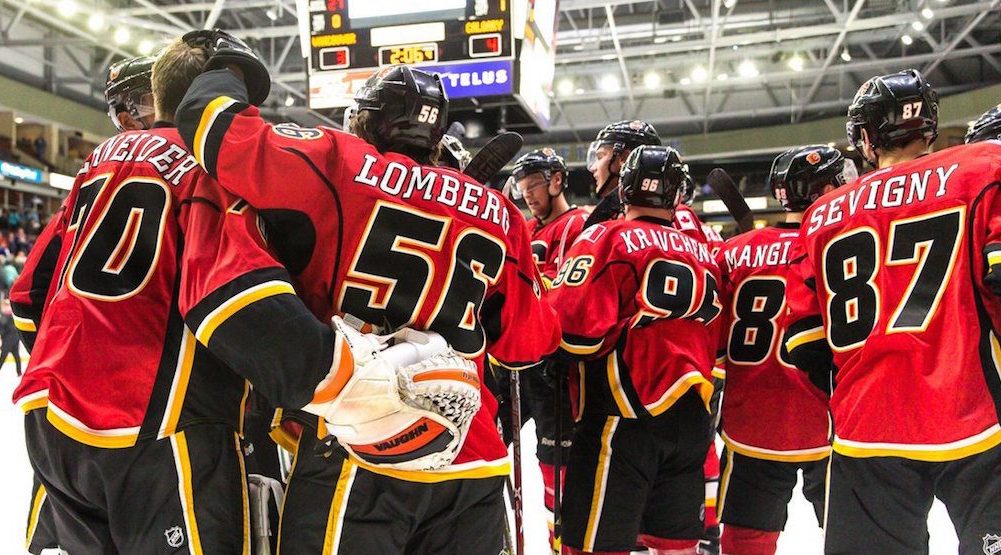 Since its inception six years ago, plenty of talent has walked through the doors of the Young Stars Classic in Penticton, British Columbia.

Overall, the Calgary Flames had a strong tournament at the South Okanagan Events Cente as they posted a 2-0-1 record over three games against the Winnipeg Jets, Edmonton Oilers, and Vancouver Canucks.

But more than the results in the win column, Flames brass were looking for strong individual showings at the unofficial kickoff to the hockey season.

For better or worse, here are four Flames prospects who made their names known over the course of four days in Penticton:

Not watching this #Flames vs. #NHLJets game? We suggest you do! It's being streamed on https://t.co/gQywOT1gQr! pic.twitter.com/PA0eujLXy7

The prized jewel from Calgary’s 2016 draft class, Matthew Tkachuk might be the most NHL ready prospect in the Flames deepening prospect pool.

Wearing Flames silks for the first time in his career, Tkachuk started off the tournament with a boom against Winnipeg on the Friday night. Although he didn’t find the scoresheet in Calgary’s 4-1 victory, Tkachuk registered 16 penalty minutes and was a thorn in the side of the Jets all evening.

While getting a little too hot under the collar and undisciplined at times, Tkachuk was able to provide a spark for the Flames and immediately showed a grittiness to his game with elbowing, cross-checking, interference, and even spearing calls.

More of the same carried over to Saturday’s night’s contest, a 4-3 overtime loss to their rivals from Edmonton.

Tkachuk picked up his first goal of the tournament in the opening period off an Austin Carroll rebound to tie the game at 1-1. While he took his fair share of penalties in that game as well, he also coaxed the Oilers into taking retaliatory penalties multiple times.

After 2 games in Penticton Matthew Tkachuk has been everything I expected. A player prepared to do anything to help his team win.

Aside from a big bodycheck in the 3rd period, Tkachuk was much quieter in Monday’s 4-3 overtime victory against the Canucks, as were his linemates Carroll and Mark Jankowski.

Overall, Tkachuk was able to stand out from the pack much like Gaudreau and Bennett at tournaments before him.

Dillon Dube is in the running for a spot on Canada's #WJC2017 squad ~ https://t.co/h4h2sd3NXn pic.twitter.com/NxkG9A4kvS

Nothing of note stood out for Dillon Dube over three games with the Flames rookies, but overall he was one of Calgary’s most consistent forwards.

Picked 56th overall in this past summer’s draft, Dube wasn’t as talked about as other prospects like Tkachuk, Tyler Parsons, and Adam Fox, but has steadily been improving his game.

The Cochrane product wasn’t too noticeable in Calgary’s victory over Winnipeg, but started to raise his profile in the overtime loss to Edmonton on Saturday.

Partnered with Matthew Phillips and Andrew Mangiapane on the power play, Dube was able to move the puck well and set up shop in the slot despite his 5’11” frame.

Monday’s game against Vancouver is really where he made his mark, as he controlled play well along the boards, drew a Canucks penalty, and hit the post in overtime while patrolling the left wing.

Showing a bit of sandpaper to his game as well, Dube will likely be a key contributor this season for the Kelowna Rockets and will have an opportunity to make Canada’s national junior team.

While some Flames prospects improved their stock over the weekend, some players did little to showcase their talents to Flames management. You can throw netminder Mason McDonald into that mix.

McDonald didn’t get much opportunity to show his stuff as he only played half of Calgary’s game against Edmonton, but he really struggled to find his feet throughout.

On the first shot he faced, the 2014 2nd rounder misplayed a Joey Benik wrist shot from a bad angle that beat him on the short-side to give the Oilers a 2-1 lead.

Things turned from bad to worse in the 3rd period, as he let a puck slip by from the top of the circle with no traffic, his second goal allowed on five shots.

Although he improved as the period went along, the Charlottetown Islanders goalie was caught too deep in his net during overtime and was beat on a breakaway by Edmonton’s Jaedon Descheneau.

It was an evening to forget for McDonald, and was probably hoping for another shot in Calgary’s finale against Vancouver.

The surprise of the tournament had to go to undrafted 21-year-old Ryan Lomberg, who finished as Calgary’s top scoring rookie.

Playing with late round picks Mangiapane and Eetu Tuulola, Lomberg scored his opening goal of the tourney against Winnipeg to give the Flames a 3-1 lead. He also showed a bit of his agitator side in that game, just two seasons removed from posting 146 penalty minutes with the USHL’s Youngstown Phantoms.

Much like Dube, Monday’s game against the Canucks was his coming out party as he dominated with both his fists and stick.

Beginning his game with a fight against a much larger Yan-Pavel Laplante, Lomberg was able to hang in and landed a few shots of his own. The following period, Lomberg picked the pocket of Jordan Subban and scored his second of the tournament on a breakaway against Thatcher Demko.

Also playing big minutes on the penalty kill, he was put on the ice in overtime to kill off a Carroll penalty and scored shorthanded on another breakaway to keep Calgary undefeated in Penticton.

Entering the 2016-17 season on an AHL-only contract, don’t be surprised to see the Flames offer Lomberg an NHL deal following his impressive three game performance.

With the World Cup of Hockey and NHL training camps getting underway this week, the 2016 Young Stars Classic was lost a bit in the shuffle. But make no mistake, some of the stars of this year’s tournament will be playing under the big lights of the NHL stage soon.

Although some prospects like McDonald and Brett Pollock earned less than stellar reviews, the Flames should be pleased with their talent and what impacts they can make at the professional level in the years to come.