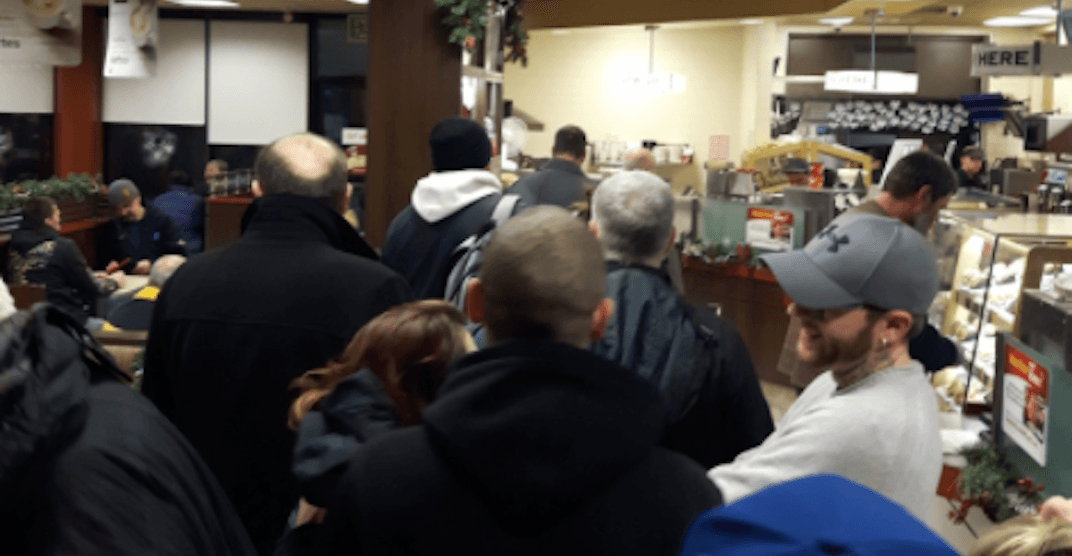 While most stores, restaurants, and businesses close down on December 25, there are a few Tim Hortons locations (though not all) that stay open through the holiday – and those restaurants become hotspots on Christmas Day.

Tim Hortons hours are decided by the restaurants’ individual owners, so it is up to each location to decide for itself if it will be open on Christmas Day.

Many places were closed on the 25th, but there were a few that stuck it out to supply desperate Canadians with that necessary cup of coffee.

With that small hope in mind, Canadians across the country were on a mission to find that elusive Tim Hortons to get their coffee fix, and once there they found that the lines were, understandably, quite long.

Though it’s not as though something as trivial as a lineup would stop these Canadians after braving snow, ice, closed signs, and an impending sense of uncertainty.

Most Canadian thing I’ve ever done; went driving around looking for an open Tim Hortons on Christmas Day.

The power was out in a lot of places. Still another half-dozen people crowded in behind me in the doorway hiding from the weather. pic.twitter.com/82kIeaKHr9

You’d think that after being born and raised in Canada I would still remember that Christmas means businesses are closed, but that doesn’t stop me and my brother from driving to the 5 closest Tim Hortons in search of sausage biscuits

In Canada, access to a #DoubleDouble at #TimHortons is considered an essential service. My daughter & her team is working today – on #Christmas Day – in Stanstead QC. #BeKind

Best Christmas present is the news that Tim hortons is opening at the end of my street, so thankful and blessed x

And probably the most Canadian thing ever happened for this lucky tweeter.

Just went to Tim Hortons to pick up some coffee and donuts, guy before us in the driver thru payed for us