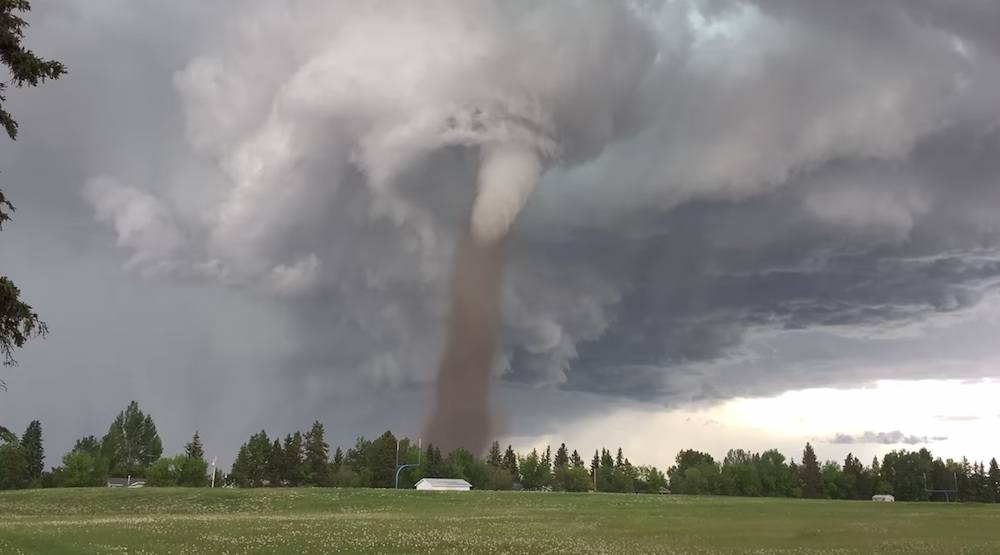 A fast-moving tornado touched down in the community of Three Hills in Alberta late Friday afternoon, prompting local officials to declare a local emergency alert for the area.

The twister touched down at 4:40 pm MDT time in an area about an 80 minute drive northeast of Calgary. A warning issued by Environment Canada after the tornado touched down stated the funnel was traveling on the ground at a speed of 50 km/hr.

The storm’s intensity has been given a preliminary rating of EF-0 on the Enhanced Fujita Scale, which means it produced wind speeds of between 90 and 130 km/hr. Photos and videos on social media show a very well-defined and wide funnel.

At approximately 5:30 pm, the alert was called off after officials were able to confirm the tornado had receded. At that point, the thunder cell was also no longer capable of developing a tornado.

No injuries were reported from the storm, but there was some damage to property.

Southern Alberta is often referred to as Canada’s very own “tornado alley.” According to Environment Canada, an average of 43 tornadoes touch down in Alberta, Saskatchewan, and Manitoba every year.

The area stretching from Windsor to Quebec City in southern Ontario and Quebec is another hot spot for tornadoes with an average of 17 events annually.

The most powerful tornado in Canadian history was recorded on June 30, 2007 at Elie, Manitoba when an F5 tornado, a twister with wind speeds of up to 512 km/hr, touched grown.

How about that cruising by your back door. pic.twitter.com/oUN8ZNiYzJ

#YourEMS is incredibly thankful no one was injured by the tornado that touched down near Three Hills today. pic.twitter.com/VVOgqpXVGV

So this is happening just north of Three Hills right now…. #abstorm pic.twitter.com/b26Xn0g63q