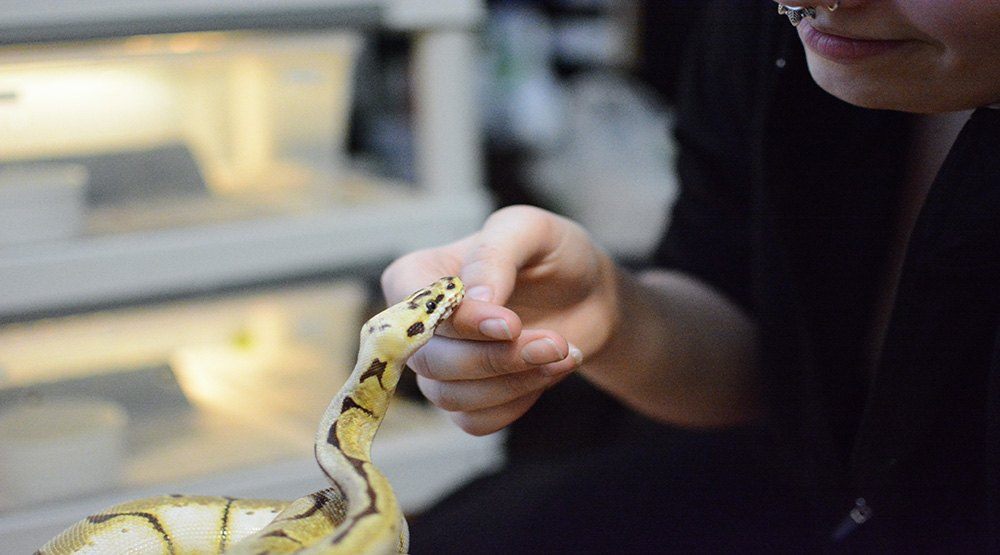 Here in Calgary, there are countless ways for people to make an honest living. Many of us work retail positions at stores, others are servers or cooks at restaurants, and still others work in an office in the downtown core.

Becca Thorn is a woman who makes her living as a professional breeder of snakes. 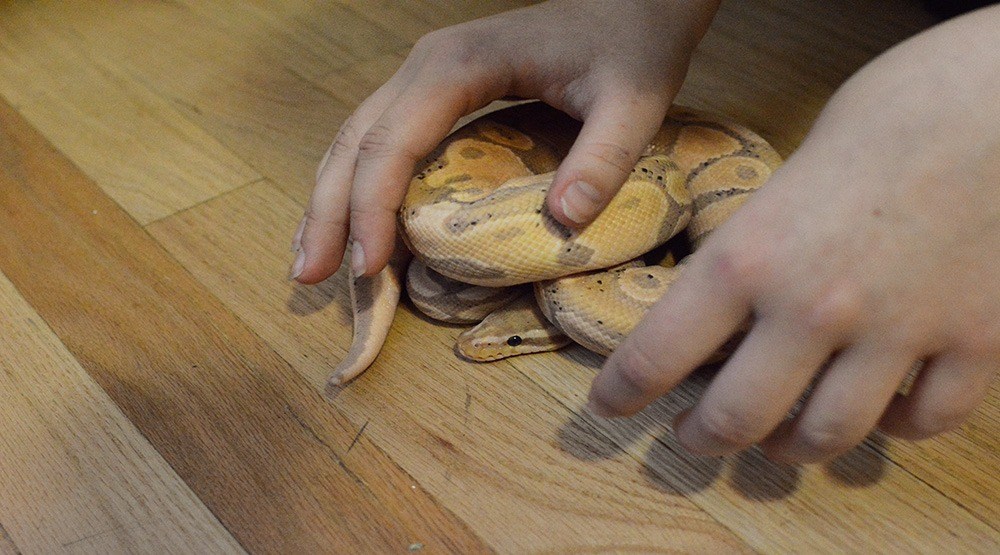 The entrance room of a professional snake breeder isn’t that different from anyone else’s until you look closer and start noticing some crucial differences.

For instance, though many entranceways are home to waist high storage racks, few people keep python enclosures in them.

While many would look at rearing snakes as a strange hobby, and a stranger way to make one’s living, Thorn has a real passion for the reptiles.

“They’re quite literally like limbless puppies,” she said while holding a young python nearly as long as her forearm and with a lot more growing to do in its life.

Thorn prefers working with pythons for their generally calm and docile nature in captivity, and for the fact that they generally can be easily tamed.

Although Ball Pythons are her preferred species to work with, Thorn also tends to a number of boa constrictors as well as her most recent addition of slightly venomous Madagascar Blonde Hognose snakes. 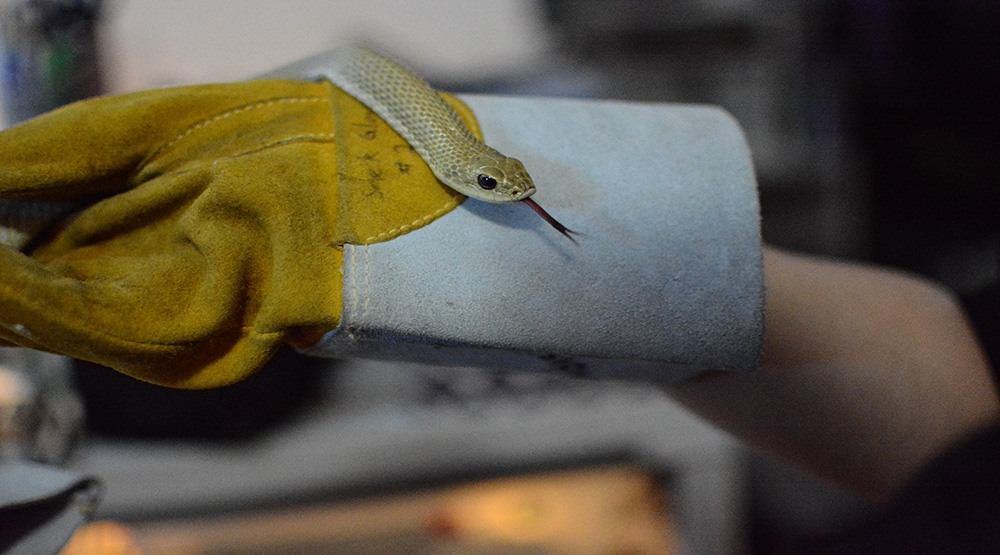 Not as Dangerous As you Think

Thorn says that snakes make good pets, as they are low maintenance compared to many others, however she points out that they have different unique personalities.

“Every snake is different. It’s just like dog temperaments.”

Thorn, gently letting the young python slowly slither around her arms and stretching from one hand to the other as it curiously explored, says that snakes need to be carefully socialized, and that owners need to be patient during the taming process.

Although Thorn prides herself on her careful husbandry of her snakes, she knows all too well that many other owners of snakes aren’t nearly as careful, and needlessly dangerous situations can occur because of mistreating.

“Did you know that snakes cannot eat humans?” she asked rhetorically, explaining to me that although there are countless stories of pythons attacking and eating humans, human prey would be dangerous to the animals due to size alone.

“The media likes to demonize them,” Thorn said, gently scratching the young python’s chin like she would a small dog. 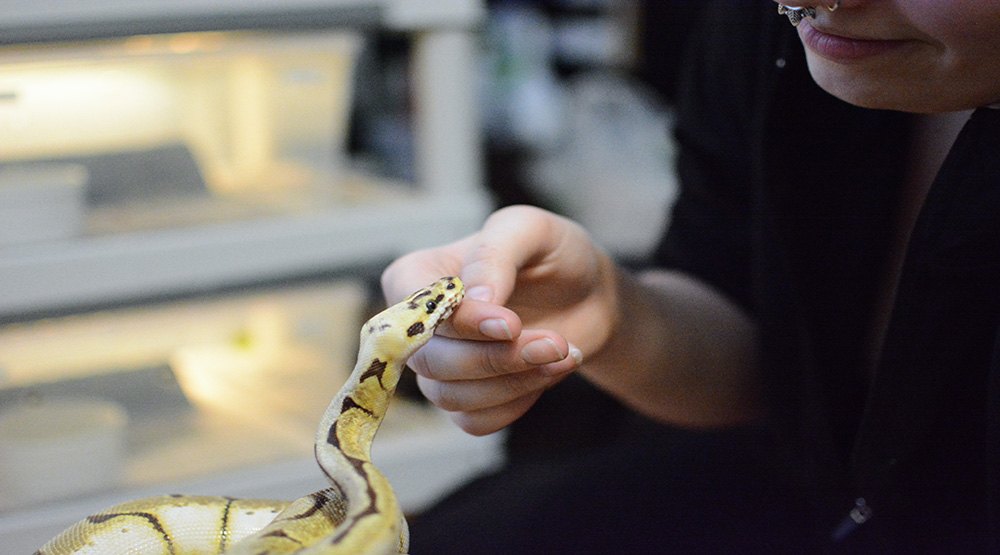 She insists that pythons or boa constrictors only attack humans when under extreme starving conditions.

Thorn went on to explain that lots of research and education is required for anyone who is looking into owning a snake, saying that too many snakes are purchased impulsively when they’re young but once they start to grow to their adult size, they’re released into the wild.

In most places, being released into the wild is a death sentence, as temperatures drop too low for the snakes to survive, but in others like the American Deep South, the snakes can become an invasive species.

Know What You’re Getting Into

Thorn insists that prospective owners should learn absolutely everything they can about the kind of snake they want to keep before making any purchase.

“Oh my goodness – research breeders,” Thorn said, explaining that although many pet stores are reputable and safe, purchasing from a breeder allows a customer to see feeding records and lots of other health related information that is more intimate than what most pet stores could offer.

Thorn started her business of breeding and selling snakes after she fell in love with her first pet snake, Hades.

She noticed that Hades had a healthy physical anomaly, and began wondering if it were possible to recreate that anomaly in future snakes through breeding.

Thorn started researching snake breeding and discovered a wide world of different sizes and colours, and loved the idea of being involved professionally.

Thorn usually sells her snakes through conventions, word of mouth, and her Facebook page, and while she isn’t getting rich off of it yet, it’s a labour of love.

“I figure I’d rather get paid a little less to do something I love,” Thorn said.

For more information, you can check out her Facebook page here.