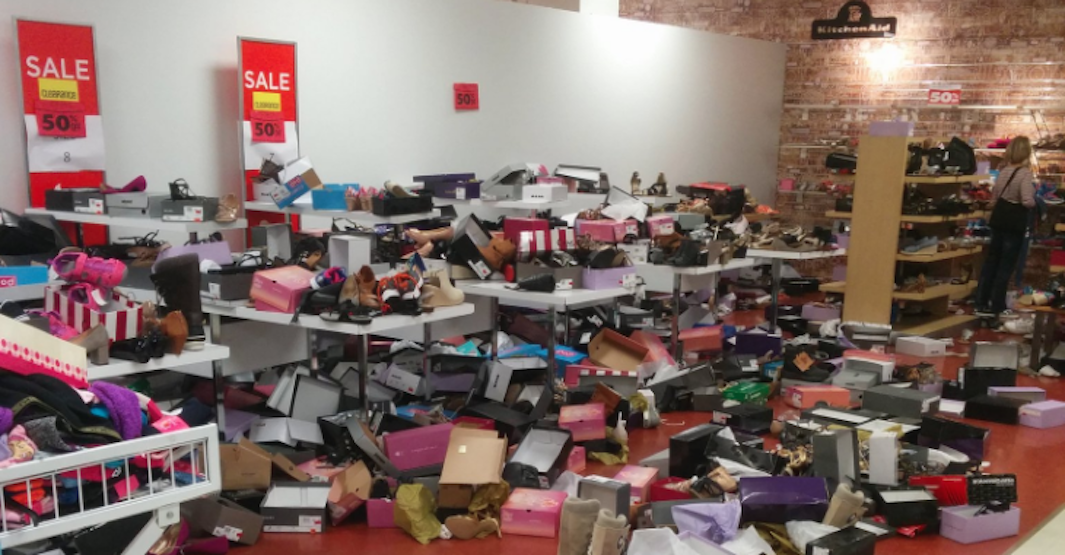 Sears began its massive country-wide liquidation sale over the weekend.

And while one might assume that Canadians would browse the racks in a civilized manner, Canadian shoppers appeared to resemble our American counterparts on Black Friday.

As you can see from the images shared on social media, shoppers mobbed display tables and carelessly threw unwanted items on the floor.

As seen pictured below, you can see merchandise, boxes and packaging strewn over the floor as customers picked through the wreckage.

Sears is closing down in Canada (didn't even knew they were still a thing). They're having a liquidation sale and ppl trashed the place pic.twitter.com/RV6ApUWbD6

Upon arriving at the Sears stores, many shoppers were disappointed to learn that the deals were less than desirable, with items only going for 10-50% off. But still, that didn’t stop the people from shopping… and trashing the locations.

I was gonna get some cute fall booties today at #Sears but it looks like a tornado hit the entire store so nvm. The deals weren't even good. pic.twitter.com/2LWVxdKrKA

A video published on YouTube by Ryan Visima shows what the Sears store in Toronto’s Fairview Mall looked like during the sale. “I didn’t see any employees on the floor cleaning, re-stocking or anything, though the cashiers were very busy. People were literally throwing stuff on the ground,” Visima said.

In fact, toward the end of the video (0:55) a box falls in front of the camera. Visima confirms this was a child just casually tossing down an empty box. “People were acting like savages,” he added.

But it wasn’t just Ontario locations that were trashed by shoppers. A shopper shared a pic of the Sears Metrotown location and it also looked as if a tornado had gone off in the store.

The liquidation sale is slated to run for another 10 to 14 weeks, depending on how long inventory lasts, before the iconic retailer will close its doors for good.