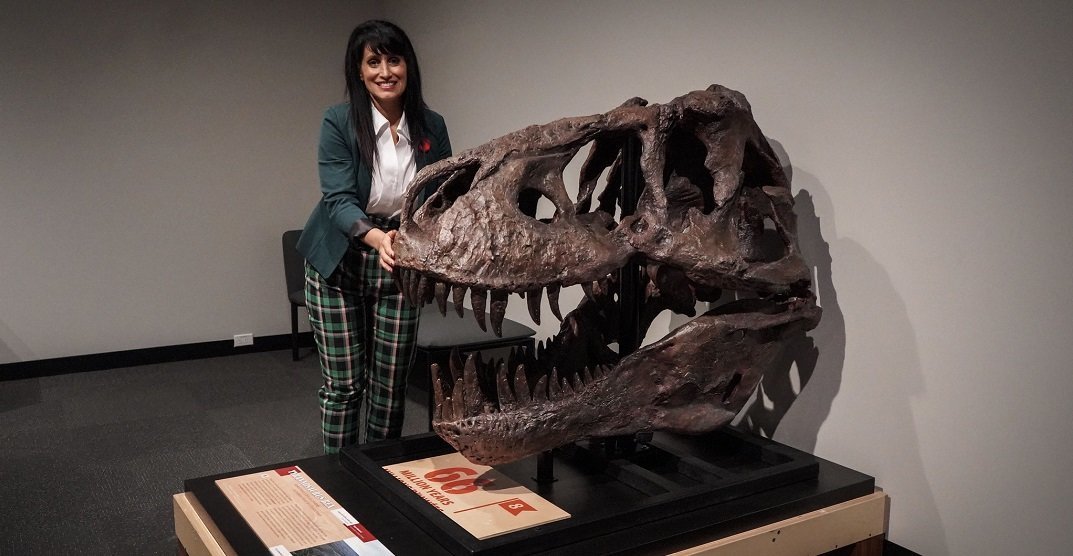 Minister Leela Sharon Aheer with a cast of a Tyrannosaurus Rex skull on display in the Museums’ Choice: Fossil Favourites from Across Canada exhibition (Province of Alberta)

The Royal Alberta Museum is now home to some of this country’s most famous fossils.

They won’t be around forever but for the next four months, RAM will feature the Museums’ Choice: Fossil Favourites from Across Canada exhibit.

The exhibit features the most impressive, famous, and significant fossils from 11 different Canadian museums (RAM included), and will be around until February 2, 2020, for Albertans and visitors to check out.

“Another great natural history exhibit is here in Alberta,” said Alberta’s Minister of Culture and Multiculturalism and the Status of Women, Leela Sharon Aheer, in a release from the Province of Alberta.

“This opportunity to experience national treasures and larger-than-life discoveries from across the country is yet another excellent reason to visit the Royal Alberta Museum.”

Here’s a full list of the fossils you’ll be able to check out at RAM over the next few months:

“Stromatolites are layered structures formed by microscopic organisms (primarily cyanobacteria colonies that obtain their energy through photosynthesis). Stromatolites are among the oldest forms of life on Earth. The oldest stromatolite fossils are billions of years old. Yet some stromatolite species are alive today. Over the last billion years or so, stromatolites that formed in the East Arm of Great Slave Lake have been tilted and folded by plate tectonic forces. This has created rocks in spectacular colours, shapes, and sizes.”

“Anomalocaris canadensis (which translates to “strange shrimp of Canada”) belongs to an extinct category of arthropods, a group that today includes spiders, millipedes, crabs and insects. Some specimens of Anomalocaris canadensis grew to about 100 centimetres in length. The anterior (front) section of this three-dimensional model shows a pair of eyes, a pair of grasping claws and lobed body segments. The fossil fragment is a frontal feeding appendage.”

Isotelus rex — Largest of the trilobites

Age: Late Ordovician, about 445 million years ago
Discovery location: East of Churchill, Manitoba
Age: Cast of the specimen
Loaned by: The Manitoba Museum

“This resin replica has been made from the newly described trilobite species Isotelus rex. Trilobites are extinct arthropods (marine invertebrates with jointed legs) related to insects and crabs. Isotelus rex lived in shallow tropical seas and fed on smaller animals such as shrimp and worms. Measuring 72 centimetres in length and 40 centimetres in width, this specimen is the largest complete trilobite ever found.”

Tiktaalik roseae — A “fishpod” in the North

Age: Late Devonian, about 375 million years ago
Discovery location: Ellesmere Island, Nunavut
Type: Cast of the specimen
Loaned by: The Canadian Museum of Nature on behalf of the Government of Nunavut

“Tiktaalik roseae looked like a cross between a primitive fish and a rudimentary four-legged animal known as a tetrapod. Its fossilized remains help us understand some of the changes that occurred when the first fishes ventured onto land. Tiktaalik roseae had lobed fins that contained simple wrist bones and finger-like structures. It also had large shoulder elements, indicating that it had flexible muscles, and large head spiracles (respiratory openings), suggesting that it had both gills and primitive lungs.”

“Archaeopteris gaspiensis was a tree-like plant with a large, woody trunk and an umbrella canopy of fern-like fronds. Deep, branching roots allowed it to grow about 10 metres high. Archaeopteris may have played a part in transforming Earth’s climate and ecosystems during the Devonian Period. Its canopy provided shelter, while its frond litter enriched streams in which freshwater fishes were rapidly increasing in number and diversity.”

“Tracks left by ancient millipedes called Arthropleura show up today as double rows of fossilized indentations. Some of these trackways are 50 centimetres wide and 5 metres long. Arthropleura may have grown to more than two metres in length. Gigantism in anthropods (animals with jointed legs, related to today’s crabs and spiders) is thought to have resulted from high oxygen levels in the lush forests of the late Carboniferous. Arthropleura appears to have lived among horsetail-like trees called Calamites, which were common during the Carboniferous Period. Over time, debris from the abundant plant life was buried and compressed to form today’s great coal deposits.”

Anchisauripus — A Bay of Fundy carnivore

“Fossils of Canada’s oldest dinosaurs are found in Nova Scotia’s sandstone sea cliffs. The cliffs are continuously eroded by the famous Bay of Fundy tides, leading to new discoveries of footprints and bones every year. One set of prints was left by a small, meat-eating theropod dinosaur called Anchisauripus. Just one to three metres in size, it evolved early and survived a major mass extinction 200 million years ago.”

“Larger than a school bus and with massive legs, “Scotty,” as the locals call it, was a big T. rex theropod dinosaur that roamed Saskatchewan 66 million years ago. T. rex was around until the dinosaurs became extinct. Scotty is one of the largest, most complete Tyrannosaurus rex skeletons ever found. Scientists recovered about 65% of the skeleton. Fossilized plants such as palms and broad-leafed trees at the site tell us that Saskatchewan was once much warmer and wetter than it is today.”

“Cornwallius sookensis (of the order Desmostylia) was a marine mammal related to today’s sea cows (Sirenia) and elephants (Proboscidea). Desmostylia had an elongate jaw, forward-facing tusks and strong, flat molars. They fed on aquatic plants in shallow coastal waters. When the climate cooled, this naked sea cow became extinct, while mammoths, which were hairy elephants, thrived on land.”

“Camels migrated north to the Yukon between the ice ages. They were common across western North America during the last ice age. This Camelops hesternus toe bone was discovered in a placer gold mine. DNA analysis completed on this specimen showed that camels in what is now the Yukon were distantly related to today’s dromedaries and Bactrian camels. They were previously thought to be related to llamas and alpacas.”

“As the massive continental ice age glaciers retreated, southern Alberta was reoccupied by camels, caribou, bison, mammoths, muskoxen and horses and then by humans. In the face of rapid environmental change and hunting, the ice age megafauna eventually became extinct. Today, skeletal remains such as this skull from an ice age horse (Equus conversidens) are reminders of that not-so-distant past.”