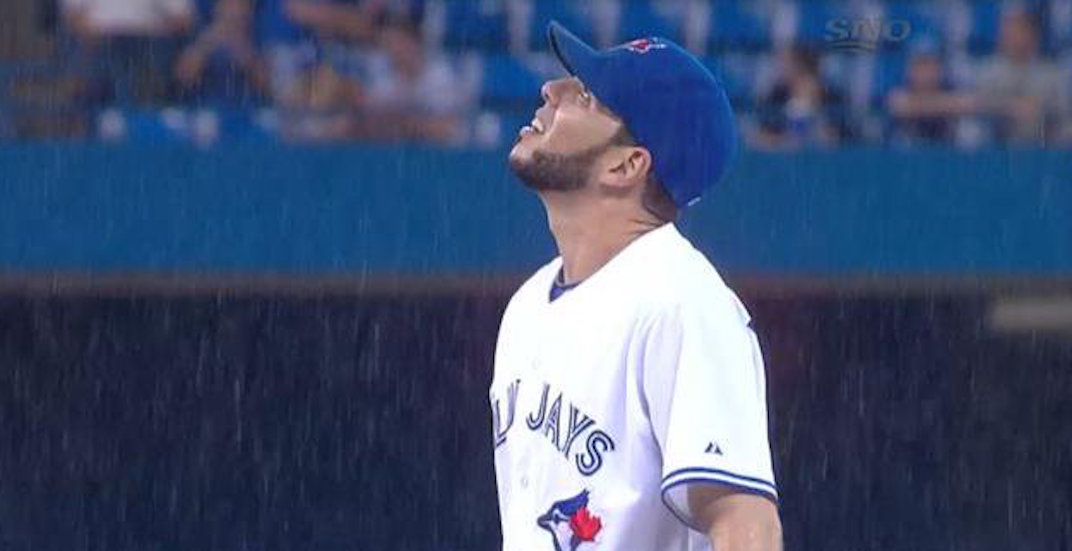 Ninety-nine percent of the time, regardless of what the weather’s like outside, baseball goes off without a hitch at the Rogers Centre. Thanks to the stadium’s retractable roof, the Blue Jays can play under all conditions.

When the Blue Jays first unveiled the Rogers Centre (then the Skydome) back in 1989, no one could have anticipated a day like Monday; when conditions outdoors would prevent teams from taking the field in a domed stadium.

Of the 2,296 games played by the Blue Jays at the Rogers Centre since 1989, only two games have ever been postponed. This was one of them.

Not even the Rogers Centre roof was immune to a surprise Spring storm which ravaged most of Eastern Canada. Falling ice from the nearby CN Tower punctured the stadium’s roof and forced the Blue Jays to postpone their scheduled game on Monday against the Kansas City Royals.

Yes, a team with a fully retractable roof had to reschedule a game due to weather conditions. It’s a nearly unprecedented situation for the Blue Jays. In the 29-year history of the Rogers Centre/Skydome, only one other game was ever postponed in Toronto.

Oddly enough, that was also against the very same opponent: the Kansas City Royals. On April 12th, 2001, part of the retractable roof was damaged during a routine pre-game test. Several panels came loose and in the interest of safety, the Blue Jays postponed the game.

On their way to Toronto for this series, the Kansas City Royals had a close call of their own as falling ice damaged their team bus. Blaine Boyer, one of their relievers, jumped into action and took the wheel as the driver was injured by the ice.

If things weren’t going bad enough, a huge chunk of ice flew off one of the Royals’ team buses and slammed into the windshield of the other last night. The shards hit the bus driver and reliever Blaine Boyer had to grab the wheel. The driver was OK. pic.twitter.com/b1kdSxqDQG

The repairs to the Rogers Centre roof began right away as crews hastily went to work on fixing the panels. Workers were spotted tethered to the top of the roof and repelled down the roof.

This is wild. These two are fearless. pic.twitter.com/JFkPeqitwH

Due to the massive scale of the roof, the workers looked like ants up there. Despite the quick patch job, the Blue Jays wisely put off the game and announced they would play a doubleheader against the Royals to make up for Monday’s postponement.

Going down through the hatch. pic.twitter.com/IoDZpEvOy5

During the reveal of the Skydome in June of 1989, one of the crowning achievements of the stadium was its state-of-the-art retractable roof. Ironically, at the insistence of the stadium’s owner, the roof was opened during part of the ceremony in the midst of a complete downpour. Performers dealt with the rain even though the stadium was supposed to be “rain-proof”.

Scott Vrooman dubbed the opening of Skydome as “the worst production in the history of Canadian television.” The poor weather only added to the sheer irony of the situation and the entire Skydome TV special oozed campiness.

Hey, remember when the Rogers Centre roof got stuck and there was a full-on downpour? 2012 was fun. pic.twitter.com/NQNIHoZnza

Back on September 4th of 2012, the roof at the Rogers Centre malfunctioned mid-game and it got stuck open. The roof took nearly an hour to close while the players were rained upon in the field of play. It was a metaphor for everything that could and did go wrong for the Blue Jays during their nightmare 2012 season.

The weather has been wreaking havoc with MLB’s schedule during the early going of the 2018 season. Due to poor conditions, many teams have experienced rain, snow, or in the Blue Jays’ case, ice delays. Toronto’s series in Cleveland over the weekend was rained out, which makes the third consecutive game postponed due to weather conditions.

Factoring in the team’s scheduled off day last Thursday, the Blue Jays have played exactly one game in the last five days. They’ll now play a pair of doubleheaders in the span of the next few weeks to make up for these lost games.

Tuesday will see the Blue Jays and Royals play in a doubleheader. Fans with tickets to Monday’s postponed game are eligible to receive ‘rain cheques’ for another upcoming home game. Meanwhile, fans with tickets to Tuesday’s game lucked out; they’ll get two games for the price of one.

First pitch flies at 3:07 pm ET (12:07 pm PT) and the second game will start shortly after the conclusion of the first one. That is, so long as the roof doesn’t spring another leak.