With Statistics Canada reporting Calgary’s unemployment rate is at a five-year high, Western Canadian developer Anthem Properties announced recently it is creating valuable new job opportunities by more-than-doubling its workforce for the upcoming phase of Waterfront, one of the city’s largest master-planned communities.

“We will create more than 250 direct construction jobs for our next phase of Waterfront in Downtown Calgary,” said Eric Carlson, CEO of Anthem Properties Group. “Each housing start has the potential to create five direct and indirect jobs. That means construction of Waterfront’s upcoming 361 homes could create as many as 1,800 local jobs. Over the lifetime of construction, we will have created as many as 5,000 jobs.”

It doesn’t appear Calgary’s residential construction sector is slowing down in the near future. So far this year, more than 230 multifamily building permits have been issued.

“Building permits for multifamily developments continue to be issued, even in a challenging market,” said City Councillor Druh Farrell, who joined Anthem at today’s ground-breaking ceremony. 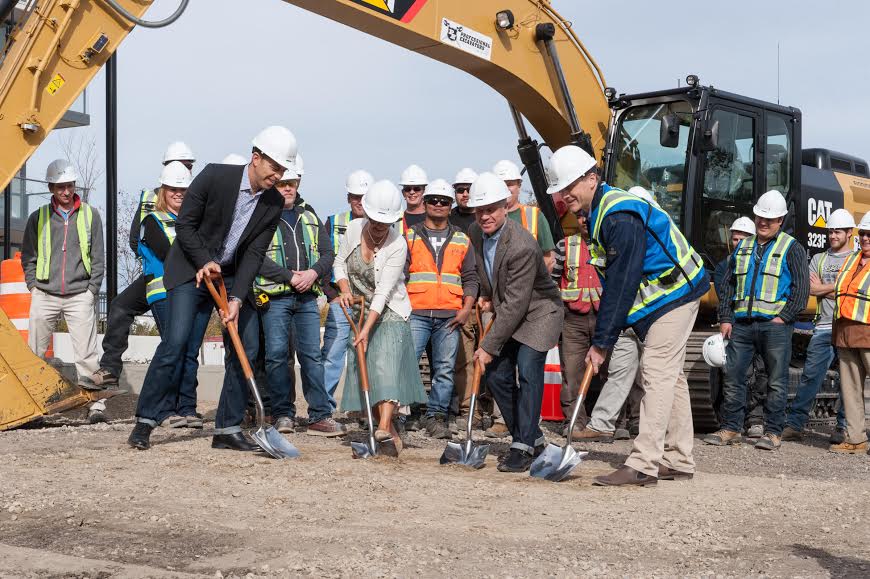 In August, Alberta’s construction industry employed 258,000 people, virtually unchanged from previous months because of strong growth in multifamily housing starts. Canada Mortgage and Housing Corporation data indicates that residential high-rise construction remains a significant contributor to employment in Calgary and the Alberta economy overall, representing 41.1 per cent of housing starts in the first eight months of this year. Those jobs deliver above-average hourly wages – $30.11 compared to $29.16 for the Alberta workforce as a whole.

Statistics Canada reports that residential building permits have outstripped non-residential permit volumes in each of the past five years, with 2015 year-to-date permits totaling $2.2 billion versus $1.6 billion in all non-residential sectors combined.

“The City of Calgary is committed to intelligent urban densification in the inner city, and as such, the residential construction sector will continue to deliver jobs for skilled trade workers and affordable housing options for Calgarians,” said Farrell.

“We launched construction of Waterfront in 2007 and have persevered through changing markets,” said Carlson. “We are excited to embark on and complete the last phase of development.”

Once complete in spring 2018, Waterfront will be a mixed-use community made up of 10 buildings with more than 1,000 homes. Some buildings are occupied, while others have been presold and are in various stages of development. Waterfront is located in Downtown Calgary’s Eau Claire neighbourhood along the Bow River.