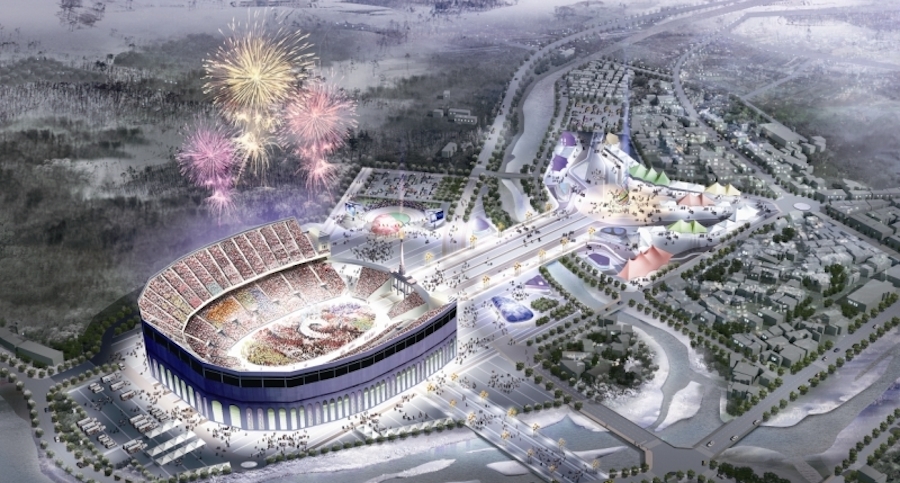 Quebec City is re-exploring the idea of hosting the Olympic Winter Games in 2026, with the help of previous hosts Vancouver, Calgary, and Lake Placid in New York.

In a press release, Quebec City Mayor Régis Labeaume says he will be traveling to Lausanne, Switzerland on April 11 to meet with International Olympic Committee (IOC) President Thomas Bach to discuss Olympic Agenda 2020, a document approved by the IOC in 2014 that introduces reforms to reduce the risk and cost of hosting the Games.

Although it is not explicitly encouraged in the Agenda, the reforms allow for the possibility of bids with multiple host cities or even countries. It specifically benefits smaller countries by splitting up event hosting duties, and in the process also dividing the cost of the new infrastructure required.

Olympic Agenda 2020 was introduced after Sochi 2014 somehow spent $51 billion on a Winter Games, surpassing the $44 billion for the much larger Summer Games event in Beijing in 2008. For that matter, there were reports that as much as $30 billion may have been stolen by Vladimir Putin and his Russian business friends in the process of building everything from scratch at Sochi.

And it was the last straw for the IOC when five bid cities dropped out of the running for the 2022 Winter Games, forcing the international sporting organization to choose between two undesirable bids – Almaty, Kazkahstan and Beijing, China.

“Over the past several years, I have often mentioned that the gigantism of the Olympic Games and the astronomical costs involved in organizing them no longer made any sense – to the point where no large city would be interested in hosting them any more,” said Labeaume in a statement.

According to the Canadian Press, Labeaume has already discussed the idea of submitting a joint 2026 bid with the mayors of Vancouver, Calgary, and Lake Placid, with each city hosting individual events.

If a bid materializes, which is unlikely, this would be Quebec’s third attempt to land the Winter Olympics in more than three decades. In 1995, it unsuccessfully submitted a bid for the 2002 Winter Games, which went to Salt Lake City with Quebec City placing fourth. Two years later, Vancouver defeated both Calgary and Quebec City for the rights to be Canada’s bid for the 2010 Games.

There will be geopolitical pressure to choose a European or North American host for 2026 as both continents will have gone without a Winter Olympics since 2006 in Torino and 2010 in Vancouver, respectively. Furthermore, after Rio de Janeiro 2016, the next three Games will be held in Asia: Pyeongchang 2018, Tokyo 2020, and Beijing 2022.

With the IOC’s flexible reforms, there is already renewed interest in bidding for the Games, potentially making this a sharp turnaround for the Olympic Movement. As many as two dozen cities are said to be considering a 2026 bid, including a possible independent bid by Calgary.

Four host cities, including two cities located thousands of kilometres away from Quebec City, would be a logistical nightmare for a Winter Games. Currently, there are no direct flights from Quebec City to Calgary and Vancouver, which means the shortest flight to the West Coast – with one required stop – is at least six hours long.

The flexibility offered by Olympic Agenda 2020 does not abandon the primary priority of creating an event plan that meets basic technical and logistical needs. A multi-city or multi-nation bid would be more acceptable in Western Europe, where the distance between multiple host cities is likely to be no greater than a few hundred kilometres – not thousands.

It would make more sense for Quebec City to partner with Montreal for the indoor facilities needed and Lake Placid for snow and sliding events rather than pursuing Western Canada partners. In the same way, Vancouver and Calgary would be better off pursuing their own bid partnership or perhaps even independent bids, given that both cities are former Winter Games hosts and have the existing venues, resources, infrastructure, and experience needed to deliver their own repeat Olympic performance.