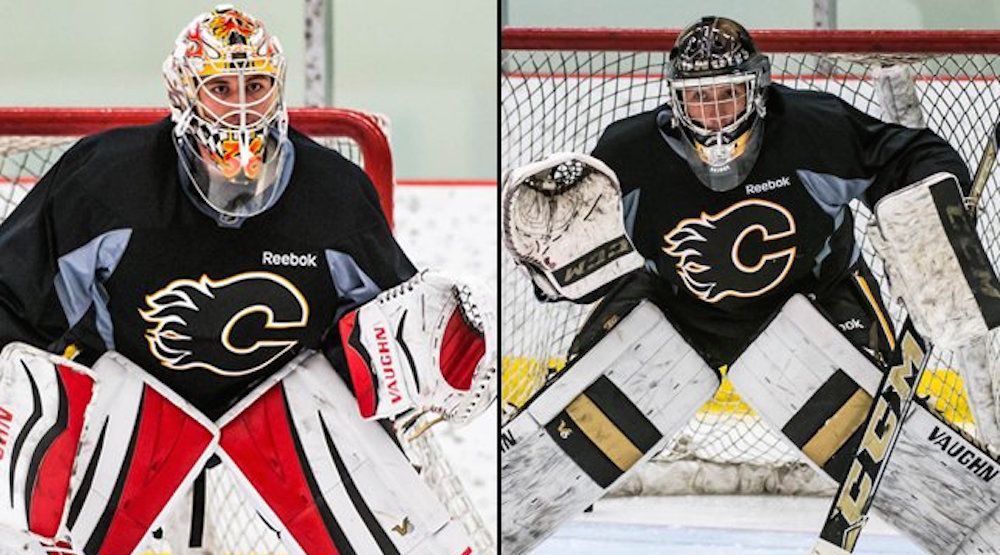 Ever since Miikka Kiprusoff hung up the pads following the lockout shortened 2012-13 season, it’s been a rotating carousel of netminders in the Calgary Flames crease.

Over that time, the Flames have averaged a 0.898 save percentage compared to the 0.913 career average of Kiprusoff.

A staple during Bob Hartley’s tenure as Calgary head coach was a two or even three goaltender system, with no goalie playing more than 52 games in a season (Hiller in 2014-15).

With Hartley’s firing in May and a change in direction with the acquisition of Brian Elliott from the St. Louis Blues, it looks like the Flames have finally moved to a starter-backup tandem with Elliott and Chad Johnson.

But, who’s to say that the Flames new goaltenders will work out over the next few seasons? Elliott finished with the best save percentage in the league last year, but at age 31 he’s certainly no spring chicken. Same goes for Johnson, with last season in Buffalo being his first taste of consistent play in the NHL.

This begs the question: which Flames goaltending prospects have the potential take over as an NHL starter within the next few seasons?

Hulking American goaltender Jon Gillies has been dubbed the Flames’ goalie of the future the last few years, ever since being drafted in the third round of the 2012 Draft.

Standing at 6’6” tall, Gillies was selected from the Indiana Ice out of the United States Hockey League, where he posted stellar numbers of a 31-11-9 record and a .915 save percentage.

Committed to the Providence Friars that season, Gillies immediately took over as the Division I school’s starting netminder and was named to the 2012-13 All-Hockey East First Team.

Fast forward to the 2014-15 season as one of the top puck stoppers in NCAA hockey, Gillies backstopped the Friars to a national title over Jack Eichel’s Boston Terriers and was named the Frozen Four’s Most Outstanding Player.

During his time in college, Gillies also plied his trade for the US National team at the 2013 and 2014 World Junior Championships. Gillies won a gold medal with current Flames star Johnny Gaudreau as a backup in 2013, and led the USA to a 5th place finish the following winter.

With such an impressive collegiate pedigree, it seemed likely that Gillies was ready for a season or two of play with the Stockton Heat in the AHL before advancing up in the Flames system.

Registering two shutouts in his first three games with the Heat, Gillies had begun to pick up steam before everything came crashing down in his seventh professional contest. While playing the Bakersfield Condors on November 6, 2015 Gillies re-aggravated a hip injury suffered in college that forced the New Hampshire native to miss the remainder of the season with surgery.

This freak injury pushed Gillies’ development back an entire year, as he will enter Stockton training camp once again as the likely starter this fall.

It could be a make or break campaign for Gillies, as Flames brass will see if he can stand up to a full professional season or if injuries will catch up to 75th overall pick.

The Flames still have high hopes that Gillies could one day take over from the likes of Elliott, but that hope is still at least one or two years down the road.

Not much was known about the 23-year-old Rittich when he was signed as a free agent out of the Czech Republic in June, but he provides another option that the Flames could potentially lean on down the road.

After spending years in the HC Dukla Jihlava system, Rittich made his debut with BK Mlada Boleslav during the 2014-15 campaign. In 23 games with the Czech Extraliga club, the 6’4” netminder posted a disappointing 8-15 record with a 0.891 save percentage.

Rittich was able to rebound the following campaign however, as he lowered his goals against to 2.53 and established a 26-22 winning record.

Other than his stats over the last two years in the Czech Extraliga, Flames fans didn’t know much about Rittich when he put on the flaming ‘C’ for the first time at Calgary’s rookie development camp.

Although he got off to a rough start, Rittich slowly improved as the camp went along and began to show some promise during the final few days at WinSport.

Passed over in his draft year, Rittich will likely get his first taste of North American hockey this fall after signing a one-year, two-way contract with the Flames as he will probably serve as Gillies’ backup in Stockton.

Calgary likely won’t rush the Czech goalie, as he will still have to find his feet playing as a backup again after two years in a starting role.

But, his age provides an interesting opportunity as he is the oldest of Calgary’s goaltending prospects and thus is slightly higher on the Flames depth chart compared to other goalies coming from junior.

Mason McDonald helped carry the Islanders to the next round of the #QMJHL Playoffs ~ https://t.co/xMfhAybs9K pic.twitter.com/Ffhu0gzL21

First glance at Mason McDonald’s goaltending stats paint a picture of a netminder that posts consistently average numbers, but that would be unfair to the Halifax native.

Playing for the QMJHL’s Charlottetown Islanders, McDonald faced a barrage of shots almost nightly as the Islanders ranked near the bottom of the league in shots allowed. Due to this, McDonald’s career goals against (3.64) and save percentage (.897) between the Islanders and Acadie-Bathurst Titan have never been outstanding.

But, the Flames saw something in McDonald’s athletic ability and big game promise as they selected him with the 34th overall pick in the 2014 NHL Draft. McDonald was the first goaltender selected in his draft year, two picks ahead of Vancouver Canucks top prospect Thatcher Demko.

Another large goaltender at 6’4”, McDonald has fast reflexes for a player of his stature but has the tendency to just block shots instead of making quality saves.

One area that McDonald has an edge compared to his other goaltending rivals in the Flames system, is his experience playing on an international stage. First donning the Maple Leaf with Canada at the 2013 U-17 World Hockey Challenge, he struggled with a 5.34 goals against in four games played.

Things began to change for McDonald the following year however, as he led Canada to a bronze medal at the World U-18 Championships. During that tournament, the Nova Scotian shone with a 4-2 record and a 1.94 goals against in six games played.

His growth in the Hockey Canada system continued last winter, as he played in two games for Team Canada at the World Junior Hockey Championships in Helsinki, Finland. Being thrown into the fire due to a suspension to teammate Mackenzie Blackwood, McDonald had a respectable 1-1 record with five goals allowed in two games.

Signing a three-year contract with Calgary last summer, McDonald looks ready to begin his professional career and will likely start the 2016-17 campaign with the ECHL’s Adirondack Thunder.

He will begin this upcoming season as the odds-on starter in Glens Falls, New York, but is the definition of a project goaltender and will have to find some consistency to avoid being passed in the depth chart.

Calgary selected another young goaltender in the second round of this year’s NHL Draft by the name of Tyler Parsons.

And with his winning background, the Flames are hoping he’ll make the successful jump from junior to professional hockey within the next few seasons.

Growing up in the famous Little Caesars hockey program in Michigan, Parsons made the immediate jump to the OHL’s London Knights instead of pursuing the NCAA route like many American netminders.

Backing up Michael Giugovaz during his first major junior season, Parsons put up a solid 15-10-2 record with a goals against of 3.53.

His career took an even bigger step forward this last year, as he stood between the pipes for the juggernaut London Knights team that featured the likes of Mitch Marner, Christian Dvorak, Olli Juolevi, and fellow Flames draft pick Matthew Tkachuk.

Parsons was near the top of most statistical categories with London last year, putting up a stellar 37-9-2 record with a 2.33 goals against and a 0.921 save percentage.

London rolled through the OHL playoffs with a 16-1-1 record, before eventually winning the Memorial Cup in Red Deer against the QMJHL’s Rouyn-Noranda Huskies in overtime.

Ranked third by NHL Central Scouting for North American goaltenders, Parsons provides another option the Flames can keep an eye on for three to five years down the road.

While it’s unknown if Tkachuk will head back to junior in 2016-17, the 18-year old Parsons needs another year with the Knights before he’s ready to advance his career on the path towards Calgary.

The past year has been a whirlwind for #Flames prospect Nick Schneider ~ https://t.co/7KB5ykAqVb pic.twitter.com/mluwHgetNc

If there’s a Cinderella story in the Flames goaltending system, it is definitely the journey of free agent signing Nick Schneider.

Undrafted, much like Rittich, Schneider is a veteran of the WHL following stints with the Regina Pats and Medicine Hat Tigers.

The Drayton Valley, Alberta product played his minor hockey in Leduc and Spruce Grove, before beginning his WHL career with the Pats. After only nine games with the organization, Schneider was shipped south to the Tigers and has slowly been establishing himself as a consistent starter in the WHL.

After posting steady numbers of 15-7-1 as a backup during the 2014-15 season, Schneider was inked to an entry-level contract by Calgary ahead of their training camp.

Ultimately being sent back to Medicine Hat, Schneider backstopped a Tigers team that missed the playoffs and shipped off many of their veteran players. In his first year as a starter, Schneider put up a 21-26-1 record with an 0.896 save percentage.

Once being eliminated from WHL playoffs, Schneider was recalled by the Stockton Heat near the end of their regular season. Getting his first taste of professional action, the 6’2” goalie had four wins in nine games, but did allow 35 goals over that time.

Still a very raw netminder at 19-years-old, Schneider is due to head back to the Medicine Hat program this fall with a chance to use his stint in the AHL to his advantage.

The Flames prospect with the smallest odds of making it to the big leagues, Schneider will have to establish himself as a top goalie in the WHL before taking the long road likely through the ECHL following McDonald.

But, Schneider does have the raw tools and work ethic to make some noise in minors in the hopes of becoming another undrafted NHL success story.

Calgary’s goaltending pool has evolved over the last three years from being completely barren to having an influx of talented prospects.

No doubt, Jon Gillies is likely the prospect to eventually take over the mantle as Flames starting goaltender. But, high round picks like McDonald and Parsons, and even long shots such as Rittich and Schneider will still get a look from Calgary management.

After all, it’s not like the Flames have had any problems rotating through their goaltending system.