The Calgary Police Service is currently investigating what they believe may have been a hate-motivated crime.

A release from CPS states that graffiti was sprayed on the Chinese Consulate-General building early Wednesday morning, with three people dressed in black spray-painting vulgar phrases at around 3:30 am.

Police state that the phrases referred to COVID-19.

Calgary’s Chinese Consulate-General building had been the target of graffiti earlier this month, with a message being spray-painted on the building sidewalk on May 19, however that incident did not reference coronavirus.

“The pandemic has led to a lot of political debate and strong views, and people are obviously free to hold whatever view they wish,” said Craig Collins, Hate Crimes Coordinator with the Calgary Police Service, in the release.

“But when people are targeting others for ill treatment or committing crimes because of those views, we have a duty to get involved.”

The release also noted that there has been a recent uptick in hate-motivated crimes around the world targeting Asian communities during the coronavirus pandemic.

Calgary has seen a slight increase in these targeted incidents, the release states.

A possible hate motivation is considered by judges after a person is found guilty and could add to the convicted person’s sentence.

Police provided a photo of the suspects: 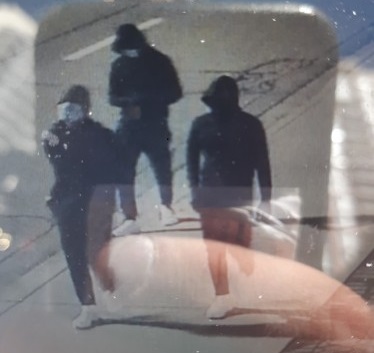 “Generally, we have not seen the same spike in hate crimes that some other areas have seen,” said Collins.

“But we are hearing from the Chinese community that they are concerned about growing hostility, so we are monitoring it closely.”

Anyone with information on the graffiti incident is asked to contact the Calgary Police Service’s non-emergency line at 403-266-1234.