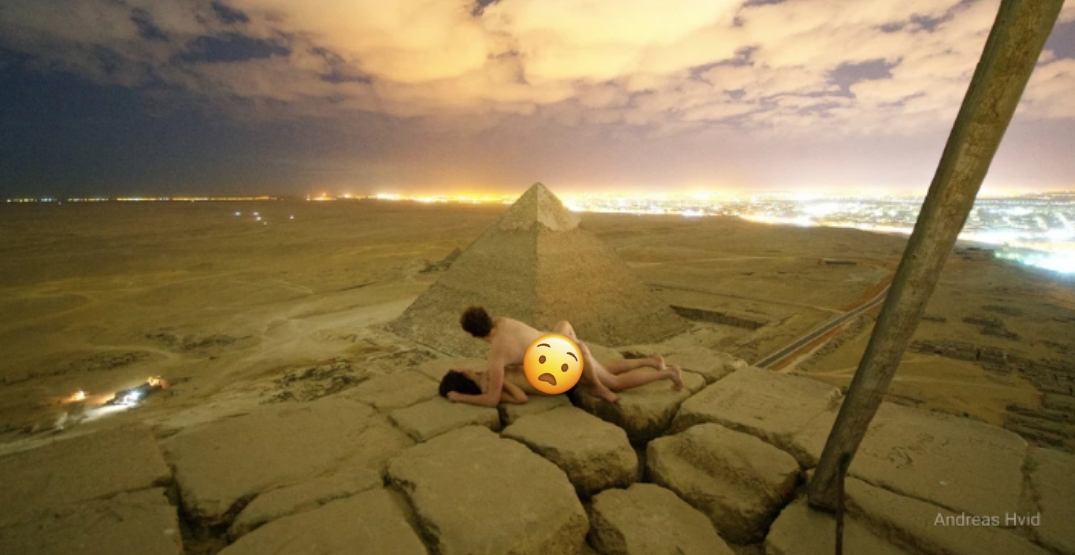 Nude photo atop the Great Pyramid of Giza. (Photo by Andreas Hvid)

Turns out it’s frowned upon to trespass and hook up on top of one of the Seven Wonders of the World. Who knew?

Maybe this wasn’t clear to Danish photographer Andreas Hvid, who decided it was a good idea to climb up the Great Pyramid of Giza with a female companion, remove their clothing, and engage in an intimate… adult cuddle. And then photograph it. Oh and then post it on his website.

Believe it or not, Egypt is not thrilled with this course of events, and officials are currently investigating this “highly forbidden act.” It is illegal to climb the Pyramids of Giza beyond a certain level, and the entire site is out of bounds after 5:00 pm.

And no, rules don’t just apply to people with clothes on.

There was initial speculation that the photo might be fake, but the video posted by Hvid suggests otherwise, which shows him and a “friend” climbing to the top of the 4,500-year-old monument. She then has a smoke and removes her top as she looks out onto the lights of Cairo below.

Let’s hope that returning to Egypt ever again in his life is not a dream of his.

If you just had to remove “Sex on the pyramids of Giza” from your bucket list, here are 51 other bucket list experiences to keep you striving for your travel goals — legally.