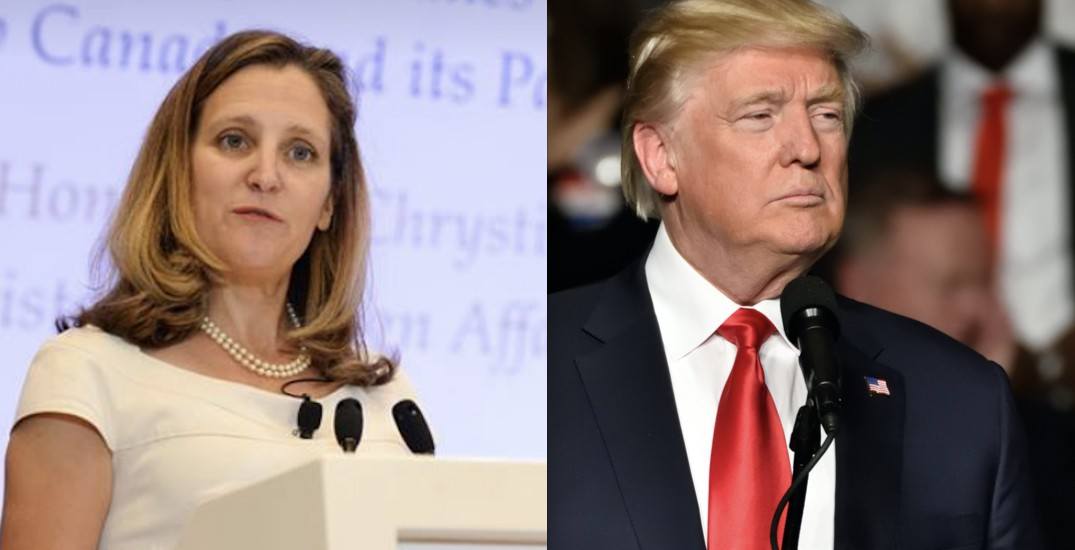 Canadian Minister of Foreign Affairs, Chrystia Freeland, confirmed that no NAFTA agreement was reached with the US on Friday.

At a press conference this afternoon at the Canadian embassy in Washington, Freeland said that both sides were “continuing to work very hard,” on a NAFTA agreement.

“We are not there yet,” she said, noting that the current negotiations were “very complex.”

Freeland went on to say that Canada is working to “update and modernize” NAFTA in a way that is good for Canadians, Americans, and Mexicans.

“With good will and flexibility on all sides I know we can get there,” she said.

However, Freeland firmly stated that no deal would be signed unless it is good for Canada and Canadians.

“Canada will only sign a deal that is a good deal for Canada,” she said.

Earlier today, the Toronto Star reported that US President Donald made “off the record” comments to Bloomberg News reporters, saying that he could not make any compromises in trade talks with Canada.

However, Trump said he could not make his position public because “it’s going to be so insulting they’re not going to be able to make a deal.”

“Here’s the problem. If I say no — the answer’s no. If I say no, then you’re going to put that, and it’s going to be so insulting they’re not going to be able to make a deal … I can’t kill these people,” Trump stated about the Canadian government.

In a response to the report, Trump tweeted in all caps that he made “off the record comments” to Bloomberg.

“Oh well, just more dishonest reporting. I am used to it. At least Canada knows where I stand!” said Trump.

Wow, I made OFF THE RECORD COMMENTS to Bloomberg concerning Canada, and this powerful understanding was BLATANTLY VIOLATED. Oh well, just more dishonest reporting. I am used to it. At least Canada knows where I stand!

Prime Minister Justin Trudeau responded to Trump’s off the record comments at a press conference this morning.

“You know over the past year and a half there’s a lot of things that have been said from time to time. I think people have noticed that our government’s approach is always to stay constructive, positive, to engage on the substance of issues and to demonstrate that we understand that the path forward is a win-win-win on all sides,” he said.

Earlier this week, Trump announced the US and Mexico had reached a preliminary trade deal as part of an overhaul of the North America Free Trade Agreement (NAFTA).

However, that deal did not include Canada.

The New York Times is reporting that negotiations between Canada and the US will extend beyond today and into next week.

According to the report, Robert E. Lighthizer, the United States trade representative, said that Trump notified Congress that a deal with Mexico will be signed and will include Canada “if it is willing” – 90 days from now.

Freeland said that the updated deadline for an agreement will be when a “good deal” for Canada has been met.

“Once we have a good deal for Canada we’ll be done,” she said.