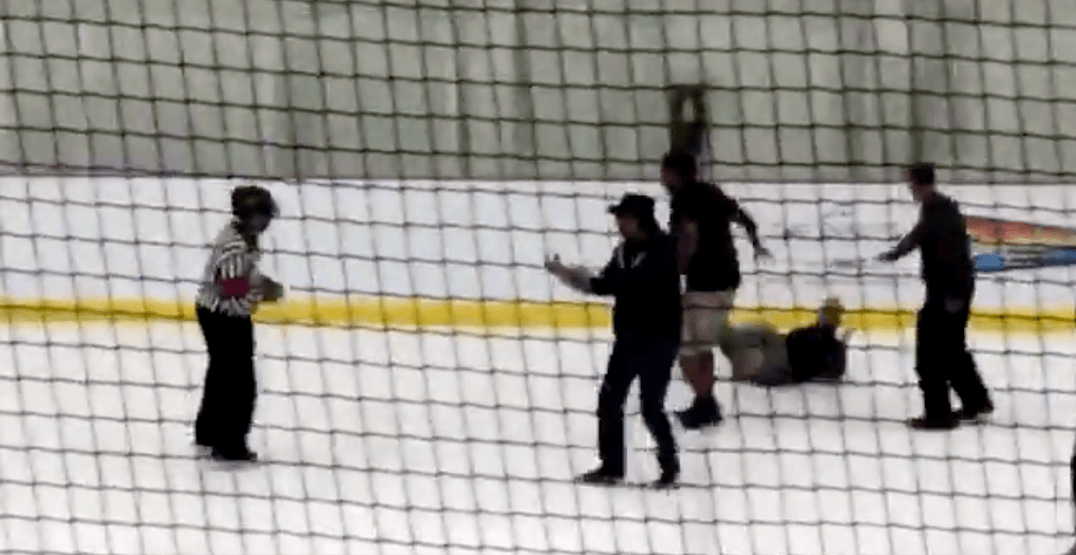 Fighting might be a common occurrence in professional hockey, but an alleged scuffle during a 10-year-olds’ hockey game in Lethbridge, Alberta resulted in two men being arrested.

According to a release from the Lethbridge Police Service, the incident was sparked at around 2 pm on Sunday, September 8 when a 10-year-old boy had allegedly struck a referee twice with his stick, prompting the ref to push the player on the ice.

This caused a group of adults, which included coaches and relatives of the player, to come onto the ice after the ref, pushing down a coach from the opposing team as they made their way towards the referee.

“The ref was punched multiple times by the player’s relative and a second man before the altercation was broken up,” the release states.

Dean Millard, a podcaster with Sports & More, Cannabis 101, and Prospects Baseball Show, uploaded a video of the altercation to Twitter on Sunday evening, which shows a group of men on ice without skates, a man being pushed down, and the referee being assaulted.

This just happened in #Lethbridge tonight. From what I’ve been told it was a 10 year old 3 on 3 tournament where a player slashed a ref. My source tells me the ref responded in a physical way (some are saying self defence) & this happened. Reaching out to organizer for more info pic.twitter.com/mlsZs8nNuE

According to the Lethbridge Police Service, one 55-year-old man, Robert Creighton of Standoff, was arrested and charged on Sunday with one count of assault, and a second man turned himself in on Monday night.

That man, 36-year-old Todd Cross Child of Lethbridge, has since been charged with two counts of assault.

The 10-year-old boy was not injured in the incident, though the referee and the coach both sustained non-life-threatening injuries, according to Lethbridge police.