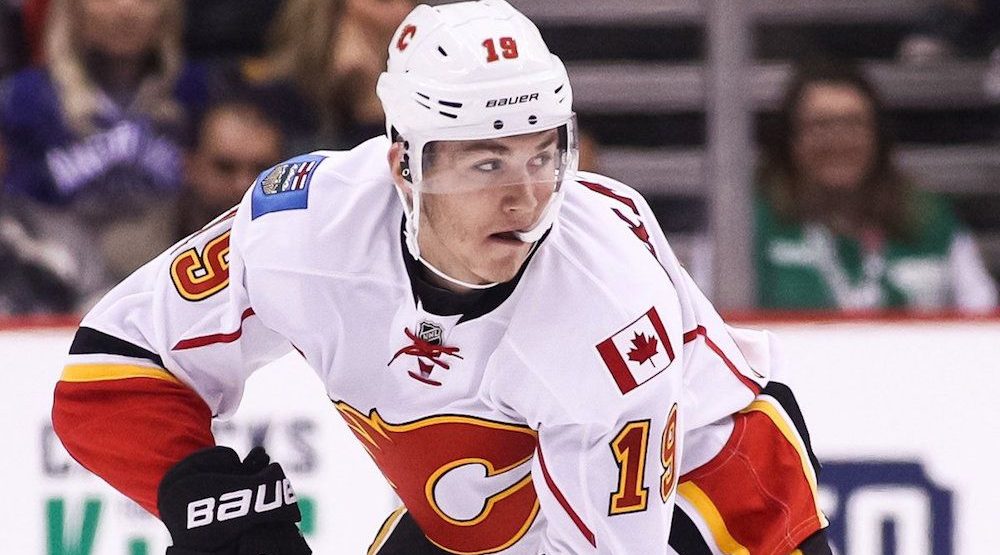 As Matthew Tkachuk walked through the hallways of Scottrade Center on Tuesday morning, he was asked to pose for a photo with the image of another power forward in the background.

The teen obliged for the photo-op, most likely because he’d probably hear about it from his father, Keith Tkachuk, if he declined the request. 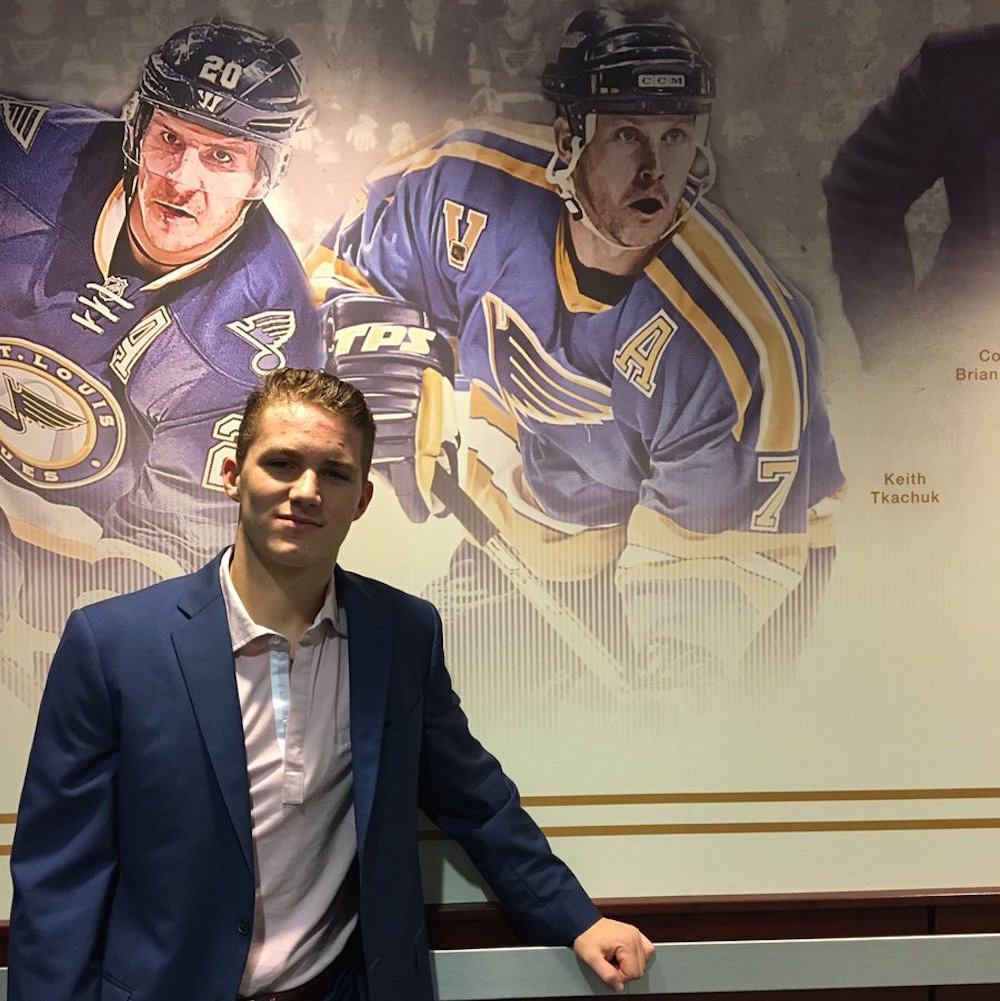 Matthew hit the ice in St. Louis on Tuesday for the first time since he was a child, when Keith was an all-star winger for the Blues. He posted an assist for the Calgary Flames in only his sixth game in the NHL, as he continues to make his case to stay with the big club for the remainder of the season.

Drafted sixth overall in last summer’s draft, Tkachuk is looking to join fellow young star and teammate Sean Monahan as players to make the jump directly from the Ontario Hockey League to the NHL.

With a game against his hometown team under his belt, the next milestone for Tkachuk could come next week on November 3rd against the San Jose Sharks, as that game would be his tenth of the year (if he plays the next four games) and would kick in the first year of his entry-level contract.

General manager Brad Treliving has until then to decide if Tkachuk is ready for the pressure of a full season, or would be better suited to return to the London Knights to try and defend a Memorial Cup title.

Flames fans got their first look at Tkachuk through the Penticton Young Stars tournament and preseason games, where he showed his raw offensive talents and ability to agitate opposing players.

That ability to get under players skin has cost the 18-year-old however, as he has already picked up a handful of minors over his first six games, with the Flames penalty kill operating at just 75.8% (23rd in NHL).

Now, taking the occasional penalty isn’t even a bad thing for a player like Tkachuk, but it’s the undisciplined holding and hooking calls that young players in the NHL are prone to that he’ll have to watch out for.

Make no mistake however, both Flames coaches and fans are excited for the Scottsdale, Arizona native who is already displaying professional level offensive skills and a drive for the net not usually seen in players his age.

Scoring his first career NHL goal in a 4-3 overtime victory against the Buffalo Sabres, fans could see the excitement billowing from his face after sniping short-side on Robin Lehner.

It’s not as if Tkachuk has been without adversity during this stint in Calgary, as head coach Glen Gulutzan scratched the rookie for a pair of games this week against the Blues and Chicago Blackhawks.

Whether this was to sit Tkachuk for his play, reward other previously scratched players, extend his nine-game tryout, or a combination of the three is still unknown.

The Flames have a few options to explore with the nine-game mark approaching, as there are solid arguments on either side to have Tkachuk stick in Calgary or send him back to junior.

One reason to keep him up would be the physical maturity he is showing in the league. It’s been a rare sight to see the big 6-foot-2 skater physically imposed by other players, as he was been able to lay a few hits over his first six games as well.

Chemistry is also a key piece of why Tkachuk could stick, as he played well on a line with Sam Bennett and Troy Brouwer during the early part of the season.

It usually takes a few weeks to establish that chemistry, but Tkachuk has been able to mesh well with the forwards he has lined up beside. He has also been able to move throughout the lineup successfully, being placed on a line with Micheal Ferland and Matt Stajan against the Blues on Tuesday.

Gulutzan also has been impressed with Tkachuk’s play, which could go a long ways towards the rookie sticking with the big club for the remainder of the season.

“He’s got hockey IQ and he’s competitive,” Gulutzan said. “Those are his two best attributes in my opinion. Just an ultra-competitive kid, all over the net. Every shift he wants to make a difference, like most young guys. He’s going to be a real good player for us.”

However, there are some upsides to Tkachuk being sent back to the Knights once his nine games are up.

Much like the Leafs’ Mitch Marner last season, Tkachuk could have the opportunity to dominate at the major junior level. Last year as a rookie, he posted 107 points in 57 games and was a huge cog of London’s Memorial Cup winning team.

If sent back to junior, Tkachuk will have the opportunity to develop alongside fellow first round pick Olli Juolevi and potential future teammate Tyler Parsons.

Another year to develop would also be beneficial to his skating ability, as that is the one area of the game where he has been lacking since joining the Flames.

Most importantly, another trip to the World Juniors would help Tkachuk grow as an 18-year-old. With Auston Matthews now a mainstay in the NHL, Tkachuk would be the top forward on a Team USA squad looking to improve on their bronze medal finish.

Labelled by some as Calgary’s version of Ryan Kesler, there is no doubt Tkachuk has the potential for a long career as a hard-nosed, agitating winger with a dynamic offensive ability.

But, as the old adage goes, ‘There has never been a player that has suffered from an extra year of junior hockey.’

It will be interesting to see if the Flames will follow the Detroit-model with Tkachuk and send him down for some more seasoning, or if they’ll continue a rising trend in the game of holding onto young talent.

Whatever the case, Matthew Tkachuk is looking like the real deal for Flames fans and could be a prominent figure on the wing for years to come.