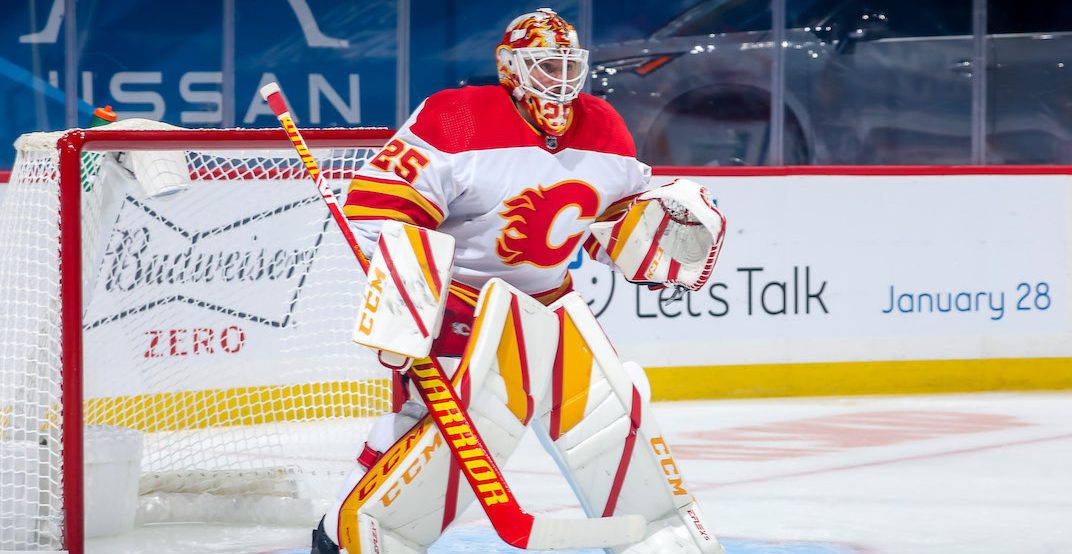 “For now, he deserves the contract.”

Through the first three games of the Calgary Flames’ season, it’s tough to argue against Elias Lindholm and his assessment of Jacob Markstrom’s first week in red and white.

The prized free agent addition of general manager Brad Treliving over the off-season, Markstrom saddled up to the Flames on a monster six-year, $36 million contract that gave Calgary it’s first bonafide number one goalie in years. There was some hesitation from fans and media alike that locking in a soon to be 31-year-old to such a lengthy deal could end in disaster for the Flames.

Now, that is still yet to be determined, we are only three games into the Markstrom-era after all.

I don't wanna stir the pot here with my red-hot takes, but guys, I think Jacob Markstrom is pretty good at this whole goaltending thing.

But, the extremely small sample size that Markstrom has delivered over that span has been extremely impressive to say the least and is providing something Flames fans haven’t had for a long time.

Comfort between the pipes.

Following Miikka Kiprusoff’s retirement almost eight years ago, the Flames have rarely known what to expect out of their netminders on a nightly basis.

From Karri Ramo and Jonas Hiller, to Brian Elliott and Mike Smith, it’s been a continuous cycle of goalies posting Vezina-worthy performances only to be shelled and pulled for a backup the next night. Hard to instil and sort of consistency that way.

A quick peek at his stat line from his Flames debut against the Winnipeg Jets last week and you’d be forgiven for thinking it was a rough outing for the Swede. Four goals allowed on 34 shots against for an .882 save percentage isn’t exactly lighting the world on fire.

But little seemed to faze Markstrom over the season opener, even when he allowed three Jets goals over the course of regulation.

It all culminated with a remarkable save on Mark Scheifele with less than three minutes remaining in regulation tied at 3-3. His Flames teammates quipped that Markstrom saved Calgary a point that night, still yet to be defeated in regulation at this point.

There’s not really a stat that speaks to the level of security that Markstrom has brought between the pipes for Calgary over his short stint wearing the flaming ‘C’ so far.

Even on odd-man rushes and five-on-three penalty kills, the Flames and their fans by extension haven’t panicked much knowing Markstrom has been up to the task.

Markstrom’s real coming out party with the Flames came over the last few days with a two-game series against his former teammates in the Vancouver Canucks.

Simply put, Markstrom was a key reason why Calgary picked up four out of a possible four points.

Saturday’s primetime tilt at Scotiabank Saddledome was a clinical effort from the Flames both offensively and defensively, with their goalie posting a 32-save shutout for his first Calgary victory.

Along with Markstrom looking unflappable in only his second start with the team, he was buoyed by a rock solid penalty kill led by captain Mark Giordano and fellow Canucks castoff Chris Tanev.

All of the #HockeyHugs as Jacob Markstrom shuts out his former team. 🤗#NHLonSN | #HockeyNight pic.twitter.com/8vnMzNjyJk

While it can be a bit overblown, that familiarity with Vancouver’s offensive weapons certainly helped both Markstrom and Tanev on Saturday. With eight more meetings between the western Canadian rivals before the end of the regular season, it’s something to definitely watch moving forward.

In Monday’s rematch Markstrom was a little less sharp allowing a pair of Canucks goals, though they both came off deflections from Flames defenders so technically he allowed zero goals from Vancouver (okay fine… a bit of a stretch).

That being said, it was an impressive showing heading into a lengthy break for the Flames.

Calgary is now in the midst of one of their longest stretches between games, off until Sunday’s two-game series opener versus the Toronto Maple Leafs.

Recording a .935 save percentage through his first week, Markstrom will likely get one if not both starts against the North Division leaders with a day off in between.

Of course, the Flames will need to get David Rittich in the mix especially with his lone game since March’s first shutdown coming in Calgary’s Game 6 loss to the Dallas Stars in relief of Cam Talbot.

But if Markstrom continues to impress like he has to begin the season, that might be easier said than done.