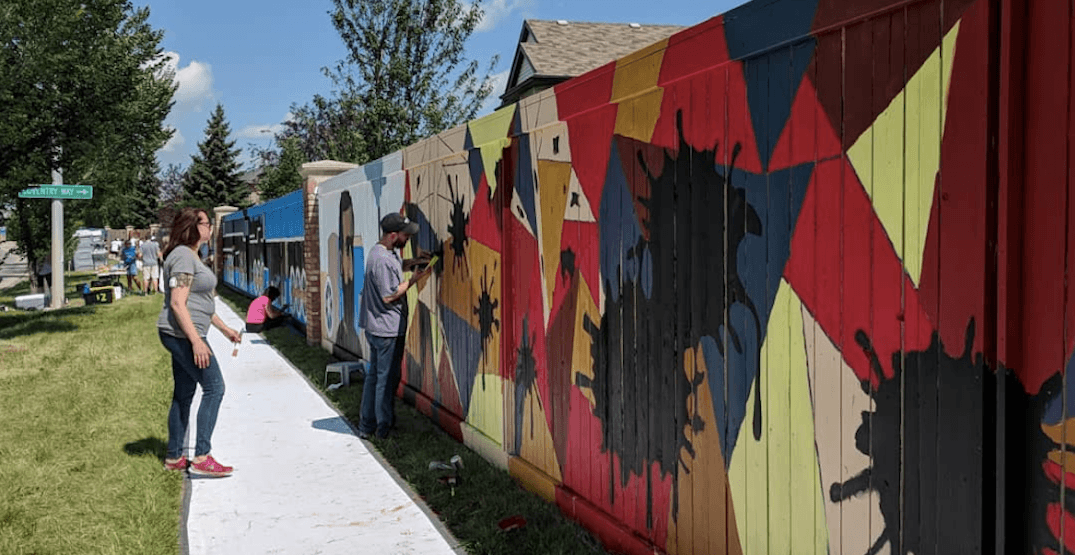 One part of the mural (NorthernHills/twitter)

Volunteers have been hard at work in a Northern Hills community this past long weekend, as they have been working on the longest mural in the country.

At 850 metres, the stretch of fence that was scraped, primed, and painted over the past month now takes the top spot for the longest mural in Canada, a feat made possible by organizers with the Northern Hills Community Association.

The mural’s design was created by project artist Mark Vazquez-Mackay, who outlined what would be featured on each length of fence, then volunteers came out to paint between the lines.

A call was put out to anyone in Calgary and the surrounding area to join in on the event, and though the painting was stalled at one point due to rain, the entire 850 metres was completed by Monday, August 6.

The mural is part of Northern Hill’s 25-year anniversary celebration, which will kick into full gear in 2019. A celebration wrap-up event is also scheduled for September 15 to thank all the volunteers who donated their time, as well as to invite everyone out to the neighbourhood to take a look at the new work of art.

Where the longest mural in Canada can be found (northernhills.ab.ca)

Of course, if you’d like to save yourself the drive, you can also take a look at some pictures provided by the Northern Hills Community Association (though there’s nothing quite like seeing art in real life, people!)

Have you seen the #nhmural yet🤩?
Day#1
We are right here! Painting the longest mural in Canada! Come and join us. Leave your mark in the community for the next decade! @vivoyourlife #yycca #ActivateYYC #muralpainting #calgaryarts pic.twitter.com/fFKWHcgcpy

#NHMural painting is wrapped up for tonight due to the rain ☔
So much got painted already 🤩
Come out to paint more tomorrow! pic.twitter.com/XLJfAQlZ6H

We are at the north section of the fence! Take a look at what we got here. We are painting history here 🌄🏔️
Hurry up to paint as we have covered a lot and might be done by the end of today!⏳#nhmural #studiovazquezmackay #ActivateYYC #yyc #yycca #calgaryarts #muralpainting pic.twitter.com/YwMaIz2JGT

We almost made – After 2 days of painting and the support of so many amazing volunteers. No need anymore to come or tomorrow – thank you all so much! #Nhmural #northernhills pic.twitter.com/US3p3fxYml