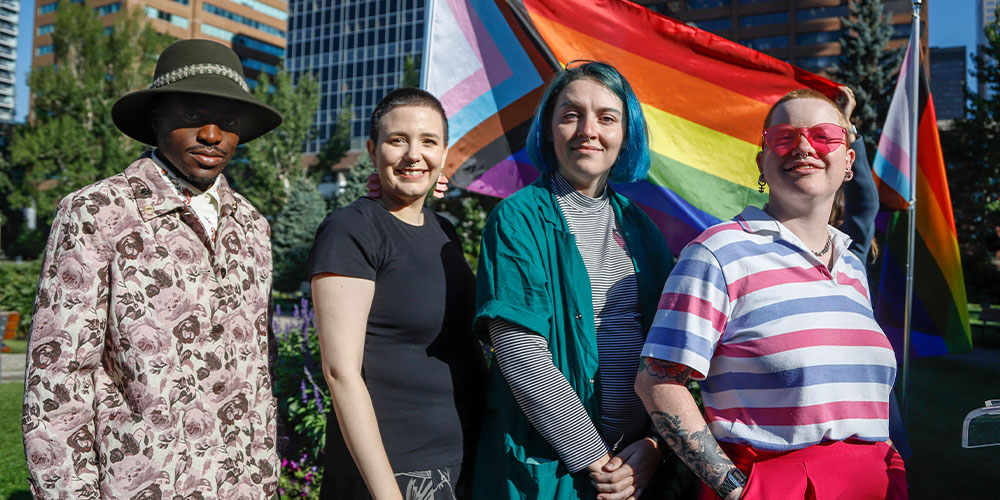 Now that Calgary Pride 2021 has officially wrapped, there is time to look back at some of the highlights.

One of those highlights is Shaw Pride Marches On – which is on display from now until October 3 and features brightly coloured murals located at the four corner entrances of Central Memorial Park in downtown Calgary.

Commissioned by Shaw Communications to reflect the meaning of Pride, the murals convey the powerful and deeply personal messages of their artists.

Recently, we caught up with the talented artists behind each of the murals to hear the stories behind their amazing artwork.

MacKenzie Bedford’s You are Queer Enough

Emerging artist MacKenzie Bedford describes art as “a reflection of the times and the people that live through them.” For her, the mural project is an important representation of Pride and a reflection of queer resilience.

The artist, who also works in marketing and communications, spent much of her life pondering whether she was “queer enough” to participate in the community. Taking an affirmative approach to her mural to chronicle her journey and denounce these feelings of self-doubt, she sees the piece as a message to her “past self” and others who are questioning their sense of belonging.

Bedford’s art can be described as celestial — she’s always looking to the stars for messages. In this sense, she hopes her mural translates as a cosmic sign for those looking to assert their own complex identities. “If you’re reading this and have been asking yourself if you ‘count’ in the 2SLGBTQ+ community, you do,” she says. “You are queer enough.” 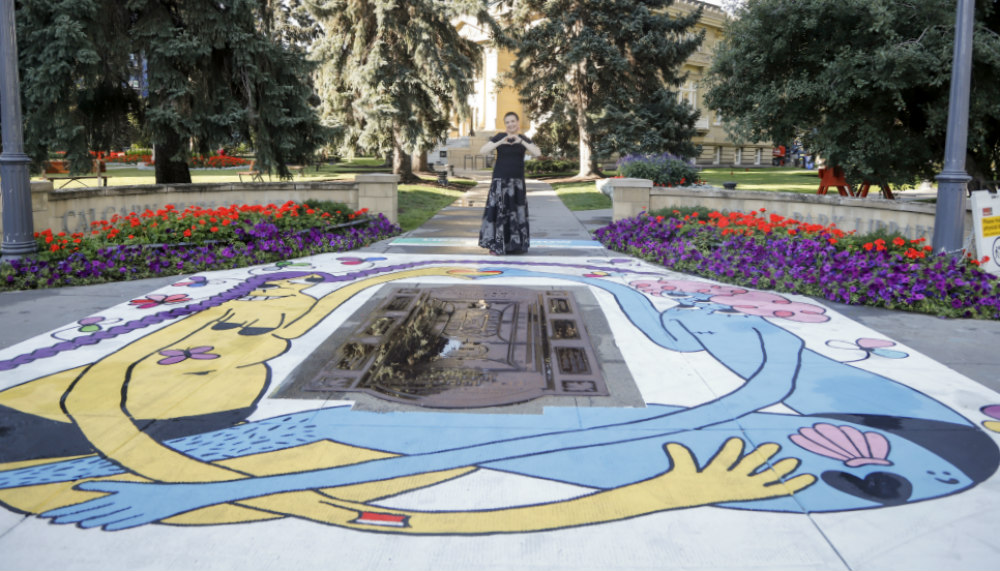 Liberation Now at Shaw Pride Marches On (Courtesy of Shaw)

For them, “art is life.” Though they’re quick to point out how cliche it may sound, from their earliest memories, art is the lens through which they have created, explored, and understood the world around them — “it feels like it was always in our blood.”

Inspired by dialogues with friends, folks in the queer community, as well as Adams’ relationship with their own body, the focal point of their mural is what it means to exist in a queer body. “The piece was inspired by the concept of liberation, and Pride as a movement,” they tell us. “Queerness and its many intersections create a complex web of histories and we are all indebted to each other as we continue to exist in and move through a world that doesn’t always accept us.”

Creating the mural has proven to be a deeply personal and meaningful experience for each of the artists. “To make a piece of public art that allows us to have a dialogue about Pride, queerness, and intersectionality means the world to us,” they add. The significance of the location, too, is not lost on them. A landmark in Calgary’s queer history, the artists note “the first pride protest rally took place here in 1990, and a year later Calgary had its first Pride Parade [here].” 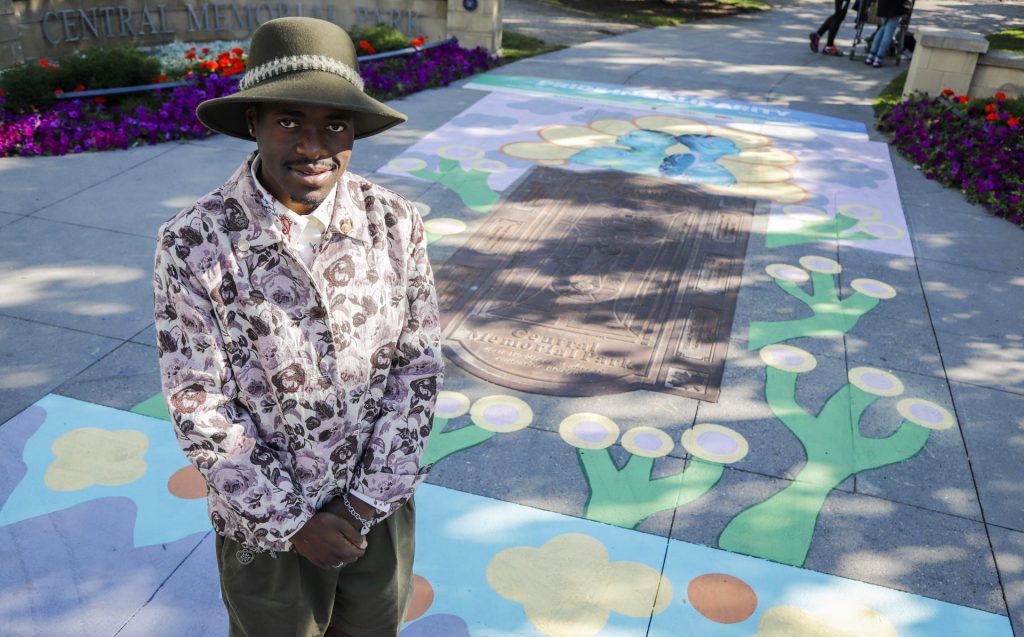 Pride In Solidarity at Shaw Pride Marches On (Courtesy of Shaw)

Despite the “very individual artistic styles” of the creative team behind the mural Pride in Solidarity — which consists of local artists Wilmer Aburto, Colin Menzies, and Chishimba Matthew Kangombe — the trio’s visions aligned.

Whether it’s listening to rap music or leveraging art as a means of navigating life or connecting with others, the arts have called to each of them in different ways. But when it came to the creation of their mural, the creative unit was unanimous in their vision to “showcase and celebrate underrepresented people in this city.”

Taking pride in their diverse and multicultural backgrounds, which include their Zambian, Nicaraguan, and Ukrainian roots, “each artist brought their own flavour and ancestral inspirations to this project.”

Roused by the heightened levels of division and polarity around the world, they felt compelled to explore themes of “togetherness, allyship, and solidarity” within their mural. “We invite viewers to approach the mural with curiosity and ask themselves what role pride and solidarity play within our individual lives.” 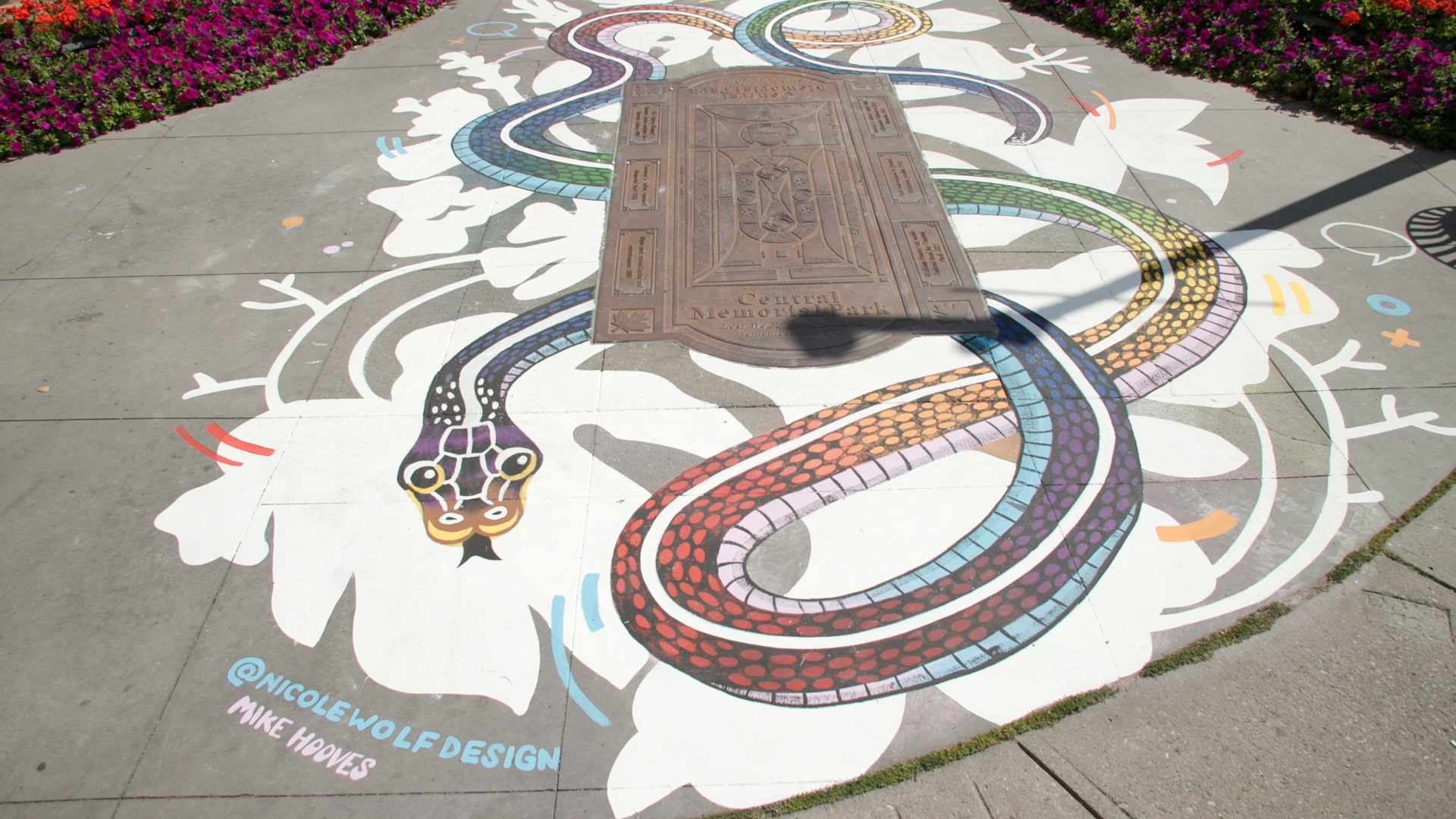 Nicole Wolf and Mike Hooves are two halves of the artist dyad behind Metamorph. “We’re both illustrators with a shared love of storytelling, bright colours, and patterns,” they tell us. Adorably, it’s only recently the pair have become close-knit friends, strengthening their friendship in last year’s art walk.

Taking inspiration from nature, their mural deals with how creatures adapt to their environments to thrive — drawing parallels between the animal kingdom and the real world where our identities are constantly being reshaped throughout our lifetime.

“We thought a snake shedding its skin was an apt visual metaphor of this concept,” they say. “This mural is about transformation. As a snake sheds its skin, there are constant opportunities to morph, grow, and change toward a truer form. To be alive is to be in a constant state of transformation, and we have the power to choose who we will be.”

Everything from the garter snake to the floral silhouettes is inspired by local nature and plants that are indigenous to the area. The dream team worked in shifts to make the mural come together. Today, they’re proud to honour the “small but mighty group of queer trailblazers” who held Calgary’s first pride rally in 1990.

“To have the art walk in such a central and visible space has many people — queer and allied — seeing and thinking about what Pride means to them. It’s special to be a part of that.”

To experience the incredible art walk for yourself, take a stroll in Central Memorial Park until October 3.

To learn more about Shaw Pride Marches On, you can visit shaw.ca.