Owning the popular name of Calgary’s smallest coffee shop, Kaffeeklatsch appears as though it was positioned in a closet but don’t let its tiny size fool you, this place is big in character.

Kaffeeklatsch is German for ‘coffee’ (Kaffee) and ‘gossip’ (klatsch) and is intended to give a more European idea of drinking coffee where women, and also men, can gather together to share a quality cup of coffee and engage in gossip, or other kinds of conversations.

Kaffeeklatsch is located in the historic YWCA and the building is used today as the CommunityWise Resource Centre. CommunityWise provides space for over 35 not-for-profit organizations and of course, Kaffeeklatsch.

When Owner Jessica McCarrel was asked why she chose this particular location she said, “my values closely line-up with the values of the managers of the space.”

We are so grateful to be a tenant of the CommunityWise resource center. This building is home to many non-profits and social services that truly have the interests of our community at heart. #community #kaffeeyyc

McCarrel used to work at the Calgary Society of Independent Filmmakers and that’s when she realized that there were no coffee shops in the area.

“People were coming in with Starbucks cups” McCarrel explains, “which is against their own philosophy in terms of who they would like to support.”

So, now Kaffeeklatsch is an active community hub for Calgarians to purchase well crafted and responsibly sourced coffee. They are proudly paired up with ROSSO coffee and every month Kaffeeklatsch features a different coffee.

Kaffeeklatsch is an active member in promoting local baristas too and McCarrel, attended this year’s Prairie Coffee Collective Barista’s Competition.

Weekend go by to fast? Monday's aren't so bad with a good cup of coffee! #kaffeeyyc #mondays

The Coffee shop is 25-square feet, it’s 5-feet by 5-feet, but McCarrell says, although there is some “spilling out” she is able to fit everything she needs from bags of coffee to espresso machines.

Guests are welcome to use the tables and chairs placed in the communal space. There is also a nice patio that is well used in the summer months. 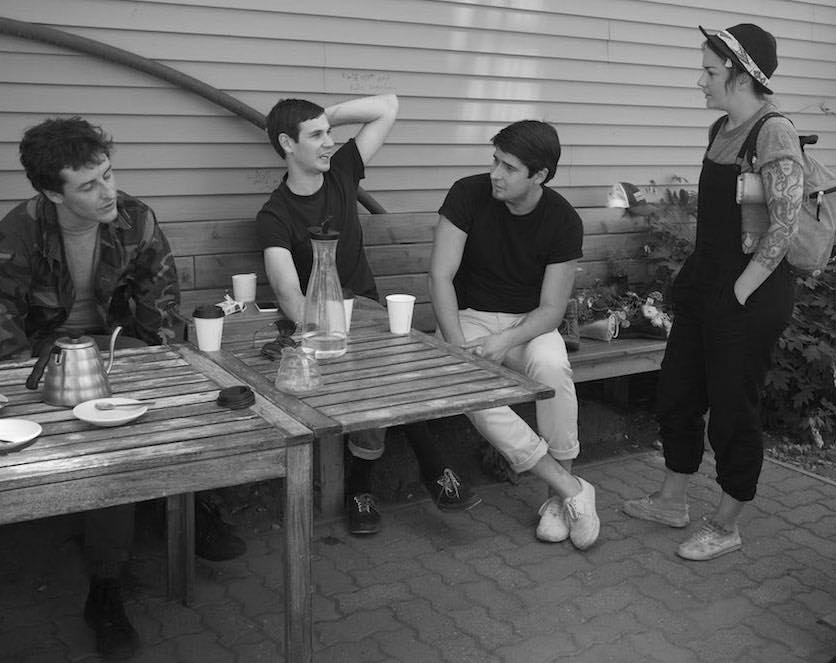 Another part of the Kaffeeklatsch is their Cold Brew Trike, which serves single origin coffee on tap for your enjoyment.  You can catch it at various locations around the downtown, so you can have your coffee fix when you are out and about. McCarrel explained that cold brew coffee actually takes roughly 12 to 24 hours to brew properly, and has been found to be quite healthy for your digestive system.

Below is the Cold Brew Trike:

We'll be serving up #coldbrew in central memorial park, on 12 ave until 2. See you there! #coldbrewyyc

Cold brew coffee makes a smooth, non-bitter coffee that is especially perfect for cooling off on hot days like today. Find us @YouthCentralYYC #yycblockparty in Eau Claire starting at 1 pm then over to Olympic Plaza to chill off All you music fans. On Sunday catch us @ourparkonline in the Central Memorial Park CommunityWise Popup closed until Monday. #coldbrew #parksale15 #sledisland #coldbrewyyc #yyc #streetfoodyyc