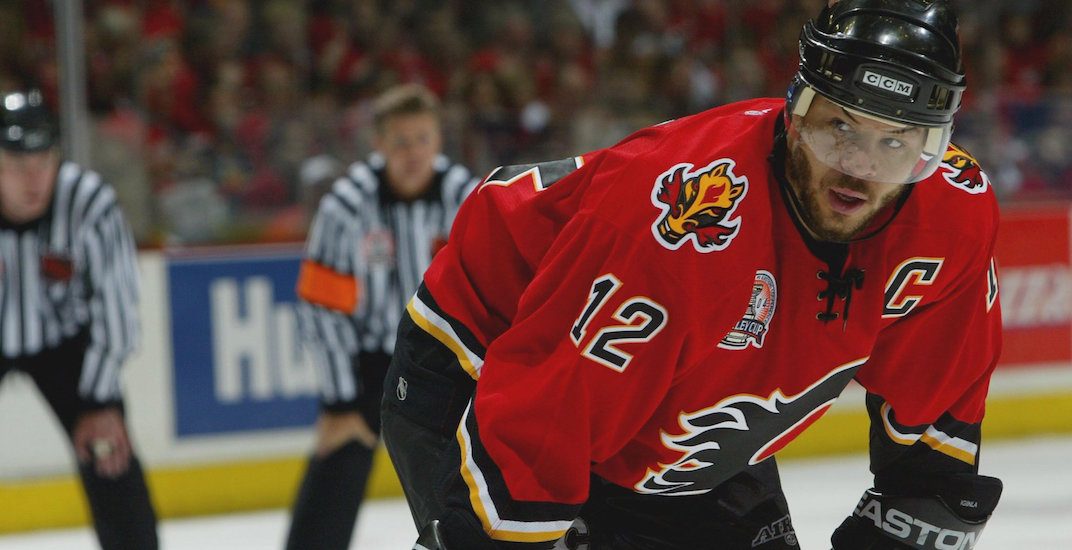 The date was June 3, 2004 inside the St. Pete Times Forum in Tampa Bay, Florida.

Calgary Flames captain Jarome Iginla was fresh off his 38th shift of the evening in a tied 2-2 contest in Game 5 of the 2004 Stanley Cup Finals against the Tampa Bay Lightning.

With a little over six minutes to go in the extra frame, Iginla hopped over the visitor boards for his 39th shift of the night.

A shift that would send Flames fans into hysterics and would etch his name in Calgary sporting lore.

On the heels of the Flames announcing that Iginla’s number 12 will be retired on March 2 against the Minnesota Wild, here’s a breakdown of the play that defined the captain’s two decades in the NHL.

A play known only as ‘The Shift.’

The beginning of Iginla’s most well known minute in the NHL started with a display of his hand-eye coordination, knocking down a pass at the attacking blue line with his stick before dropping it off for Marcus Nilson.

From there, Iginla battled at the left side of the net with Nolan Pratt while the Flames moved the puck around the offensive zone.

A shot from the point by Robyn Regehr missed wide and bounced off the end boards, giving Iginla a great chance at ending the game.

However, Pratt and Lightning goalie Nikolai Khabibulin combined to tie up the Flames captain and keep the overtime frame rolling along.

As the chaos continued with the puck nowhere to be seen, Iginla and Pratt continued their wrestling match along the ice which resulted in the now famous scene of Iginla playing the rest of overtime without his helmet.

After Nilson was able to maintain Flames possession of the puck, a backhanded shot was tipped around the end boards to Iginla who chased after it in the corner.

Deking out Pratt with a juke and a head fake, Iginla felt the pressure of the oncoming Martin St. Louis and executed a no-look backhand feed that found Jordan Leopold at the top of the circle.

Leopold’s shot was tipped by Lightning forward Andre Roy however, settling onto the stick of Vincent Lecavalier and giving Tampa Bay their first chance to clear the zone in close to a minute.

Most players would have used the change in possession and the light dump into the Flames zone as a chance to make a line change, especially in an overtime period that was already 14 minutes old.

But Iginla chose to remain on the ice for one last line rush, a decision that would pay off just seconds later.

As Regehr gloved down the Lecavalier flip into the Calgary zone, he quickly batted the puck up to centre ice for an awaiting Iginla.

Without hesitation, Iginla once again turned to the backhand and found an open Nilson charging up the right wing into the Tampa Bay zone.

Nilson then crossed over to into the high slot and fed it back to the point for Regehr, allowing Iginla to drift into the slot and then into the right corner uncontested.

It was this misdirection from the Flames that allowed their captain to get open, setting up one of the most famous goals in franchise history.

Working the cycle, Oleg Saprykin fresh off the bench found Nilson on the left side who fed it cross-ice to a wide open Iginla.

Somehow, Iginla wound up a slap shot from the right face-off circle that managed to get in between both Pratt and Chris Dingman attempting to block the slapper.

His shot was stopped by Khabibulin, however his fellow countryman Saprykin was able to sneak a rebound through the five-hole to give Calgary a 3-2 overtime win and a 3-2 lead in the best-of-seven series.

Iginla finished his night with one goal and one assist, astoundingly leading all players in Game 5 with just shy of 31 minutes of ice time to pull the Flames to within a single win of clinching the Stanley Cup.

Ultimately, it would be Calgary’s final win of the magical 2003-04 season as Tampa Bay of course went on to win Games 6 and 7 en-route to the franchise’s lone Stanley Cup victory.

However, the combination of power, tenacity, skill, and drive from Iginla in Game 5 remains one of the lasting memories of that wild spring in Calgary.

And surely, it will be one of the memories Flames fans will celebrate later this year as Iginla gets his due as one of the greatest players in franchise history.