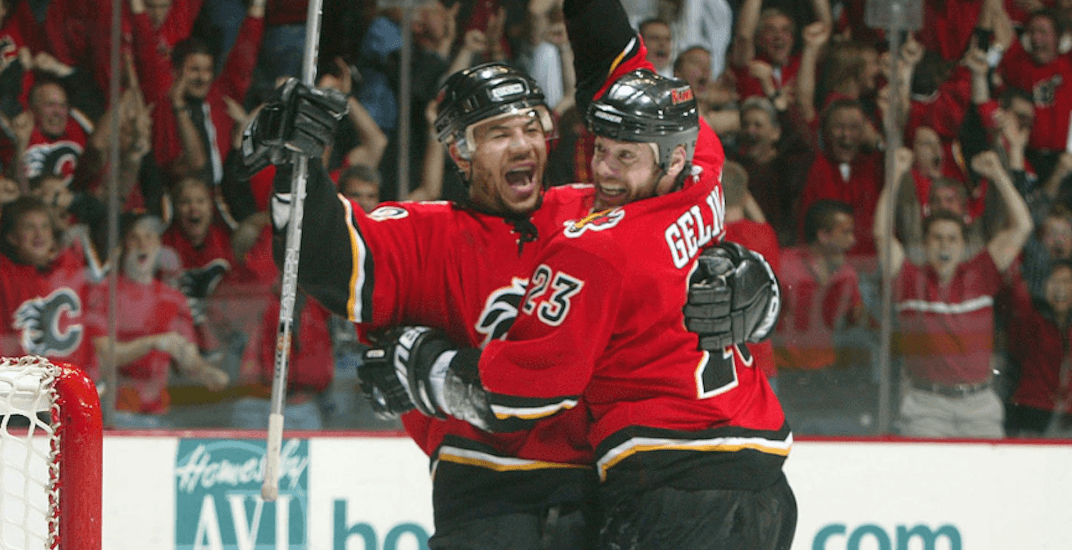 If you’re planning on attending Saturday night’s game between the Calgary Flames and Minnesota Wild, it’s probably a good call to bring a box of tissues.

It will be an emotional night at the Scotiabank Saddledome, as the Flames will finally raise the number 12 banner to the rafters to honour the greatest player in franchise history.

Jarome Iginla ended his NHL career playing for four franchises, but it’s his 17 years in Calgary that define his Hall of Fame pedigree.

As the Flames get ready to honour one of the greatest power forwards in NHL history, here’s what people are remembering about Iginla on social media.

Everyone calls it the golden goal when Crosby won the game in Vancouver, but for me it'll always be the Golden Crosscheck. The pride of Alberta Jarome Iginla making the sweet pass while gettin knocked to the ice. #heart #warrior

Ironically, one of Iginla’s crowning moments came while he wasn’t wearing even wearing a Flames logo on his chest.

It was the ‘Iggy’ heard around the world, tied at 2-2 in overtime of the 2010 Vancouver Olympics gold medal game between Canada and the United States.

Working in the corner with the puck, Iginla fed a perfect pass to Sidney Crosby to give Canada the gold medal and its most enduring hockey moment in a generation.

When the Flames were in Pittsburgh a few weeks back, Sidney Crosby was asked about Jarome Iginla's pass on the golden goal.

"I can only thank him so many times for that pass, but I’ll thank him again."

As fate would have it, Iginla’s number will be retired nine years and one day after setting up the ‘Golden Goal.’

While Iginla’s career was mostly defined by his goal scoring and offensive abilities, he was no stranger to dropping the mitts.

Iginla fought 72 times in his career, but none were as famous as his spirited scrap on May 29, 2004 against Tampa Bay’s Vincent Lecavalier.

What’s the best hockey fight of all time? Trick question it’s the Iginla-Lecavalier fight from the 04 finals.

Two legitimate super stars throwing punches in the midst of Game 3 of the Stanley Cup Finals, a script nowadays that would be too outlandish to write.

Iginla never won a Stanley Cup in his career, but he did serve up one of the most memorable Stanley Cup Final moments of the past two decades.

Rarely did games get as passionate and ferocious in the early part of the decade as when the Flames and Vancouver Canucks locked horns.

But, it was in those games that Iginla displayed the kind of player he was.

Gritty, tenacious, incredibly skilled, and not afraid to mix it up with Vancouver when he got the chance.

It was a moment against the Canucks however that Iginla’s true character came out however, leading the Flames back onto the ice following Trevor Linden’s final NHL contest.

Linden called Iginla “the greatest player in the game” during those handshakes, proving that even the greatest rivals on the ice can have the most respect for each other off of it.

Jarome Iginla is the reason I converted from a lifelong Canucks fan to a #Flames fan. What a class act, an outstanding player, and a guy with a smile that lights up the room. Can’t wait for March 2nd!#ThankYouIggy #12 #foreveraflame @NHLFlames

For the better part of a decade, Iginla established himself as one of the most feared goal-scorers in the entire NHL.

A two-time winner of the Maurice ‘Rocket’ Richard Trophy as league-leading goal scorer, Iginla is one of five players to have won the award multiple times since its creation in 1998.

The definition of consistency, Iginla never scorer fewer than 28 goals in a season for the Flames between 1998 and 2012.

"I heard the first announcement that he was traded to Calgary and I went 'Yes!'"

For a large section of Flames fans, their lasting memories haven’t been Iginla’s moments on the ice, but meeting the man and his family away from the rink.

Growing up in Okotoks, I can personally vouch that anytime Jarome’s mother Susan filled in as a substitute teacher was the highlight of your day.

As for Iginla himself, stories of his generosity and selflessness have been well known throughout the hockey community.

From former teammate Shean Donovan remembering Iginla introducing a South American family to the sport, to the Flames captain making time for fans after practice, he was never let his spotlight get too big.

For all the accomplishments that Iginla has achieved over his career, it’s those moments that Flames fans and hockey fans in general will hang on to.

And if anything, that’s the mark of a true NHL legend.