Reefer Rewind is a Grow series that takes a closer look at some of the best stoner films of all time and provides random factoids about the cult classics.

If we are going to do a Reefer Rewind where we write about some of the great stoner flicks of all time, it’s sacrilegious not to include The Big Lebowski.

This classic Coen Brothers oddball slacker-hero tale was released on March 6, 1998 to somewhat mild reviews. The film didn’t do very well financially at the box office but it ended up making a ton of money through VHS, DVD, and Blu-Ray sales.

The Big Lebowski has grown into something far bigger than just a cult hit.

The film is so ingrained into pop-culture that it spawned Lebowski Festivals throughout North America. It also became one of 700 “culturally, historically, or aesthetically significant” films preserved for future generations through the Library of Congress’s National Film Registry.

Not bad for a movie that doesn’t actually have much of a plot.

The story centers around The Dude, played by the great Jeff Bridges, who is brutally assaulted by two hired goons who mistaken him for someone else. After realizing they attacked the wrong guy, they leave the house but not before one of them urinates on The Dude’s rug. From that point on, the movie is one big trip.

The inspiration for the film came from a 1939 noir crime novel called The Big Sleep by Raymond Chandler. According to Joel Coen, Chandler novels “usually follow the main character as he encounters these different characters on a journey to uncover a mystery, or find a missing person, or whatever it may be in the novel. In this case, that was the model for this story.”

Instead of a detective or private eye, The Dude is dropped in “the most impossible of situations” and is “the person who seemed least equipped to deal with it.”

Actually, in true noir fashion, the lead character – in this case, The Dude, is present in every scene in the movie. Seriously, even the scenes he’s not involved in, take a look in the background; the man is omnipresent throughout. 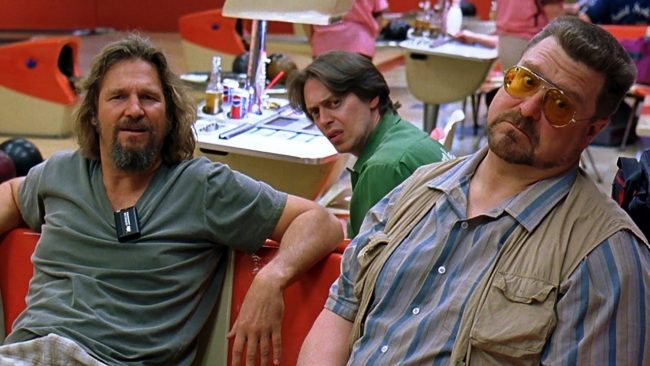 The Big Lebowski  was such a cult hit it birthed a small cult of its own called Dudeism, which “preaches non-preachiness” and “practices as little as possible.” Some viewed The Dude as a contemporary Jesus. But actually, Jesus was played by John Turturro in this movie and “nobody f*cks with da Jesus.”

Turturro wasn’t the only longtime Coen Bros collaborator to appear in this film. Names like John Goodman, Steve Buscemi, Jon Polito, and Peter Stormare had memorable roles. Surprisingly though, one regular Coen actor was missing and that was Frances McDormand, who is married to Joel Cohen and has been in eight of the Coen’s movies, including an Oscar-winning performance in Fargo.

Outside of the great acting and the nonsensical story, it was the music that really tied the film together. From The Dude’s hallucinatory odyssey set to Kenny Roger’s “Just Dropped In,” to the Sons of The Pioneer’s “Tumbling Tumbleweeds,” the soundtrack is as important as the cinematography. That said, all the music you hear in the movie is played through a radio. 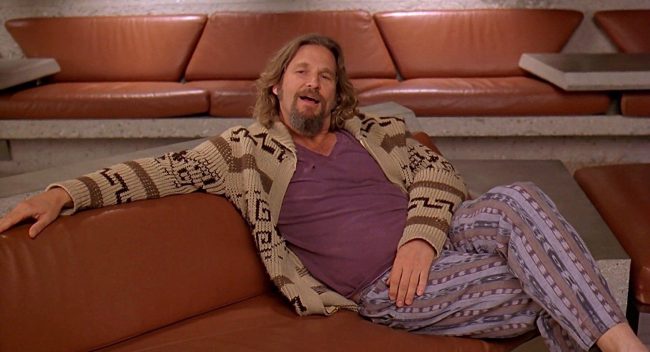 Jeff Bridges as The Dude in The Big Lebowski. (Gramercy Pictures)

In the end, it was Bridges’ performance that made the film special. It didn’t take much for the actor to delve deep into the role, because ultimately there was already a lot of The Dude within. Not only did most of his wardrobe come from Bridges own closet, but just like the character he played, he always seemed to be super chill and low maintenance on set.

But there was always one key piece of information he wanted to know before shooting each scene.

“At the start of shooting every scene, he’d walk up to one or the other of us and ask if we figured The Dude burned one on the way over,” says Ethan Cohen, referring to the character’s prolific marijuana habit. “So thinking about it, usually we’d say, ‘Yeah, he probably burned one on the way over,’ and Jeff would go over in the corner, rub his knuckles in his eyes to turn them red, and do the scene. And that was kind of the extent of what you had to do to direct Jeff.”

Go grab yourself a White Russian and a joint, and give this classic another viewing.