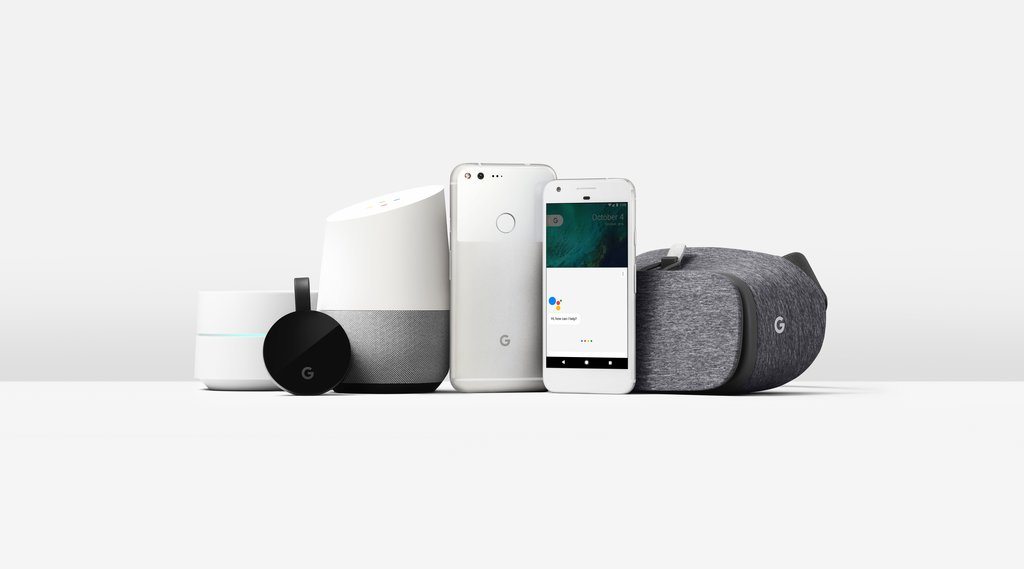 In a global stream, the tech company announced the introduction of a new phone, Pixel – their first phone made of 100% Google hardware and software – a home Wi-Fi system, a voice activated speaker system, and a mobile VR app and case that’s so simple to use it will undoubtedly change how we interact with VR moving forward, and the Google Assistant, an AI system that makes Siri look like the slow kid in class.

Oh, and they made sure to troll Apple along the way, pointing out that their brand new phone still (satisfyingly) has a headphone jack and no camera ‘bump’ on its best in class camera.

Most of this new equipment will be available in Canada by November, 2016 but any pricing you see is currently still in USD. For more about all you’ll find below, you can check out Google’s blog here.

In his presentation earlier today, Google CEO Sundar Pichai said, “Our goal is to build a personal Google for each and every user,” that will one day go so far as to “capture your emotions when speaking to you.”

It’s a brave new world, kids. And these look like the best toys to have in it.

From what we saw today, the Google Assistant is going to have Siri shaking in her phone case. Its understanding of context is nearly approaching human.

The first phone to come with the Google Assistant, Pixel and Pixel XL also boast the best in class camera (12.3 megapixels + video stabilization + 4K video), and VR ready. Oh, and it can get 7 hours of battery life in a 15 minute charge.

The Network Assist will follow you around and keep your connection at its strongest no matter where you are in your home. Too boot, you can pause people’s connection in your home – so if it’s dinner time, it really is dinner time.

A speaker you can talk to that has Google Assistant built in? Okay, Google – play shut up and take our money.


VR in less than a 5-second setup complete with remote control. And all for under $80 USD. This could be a game changer in VR early adaption.