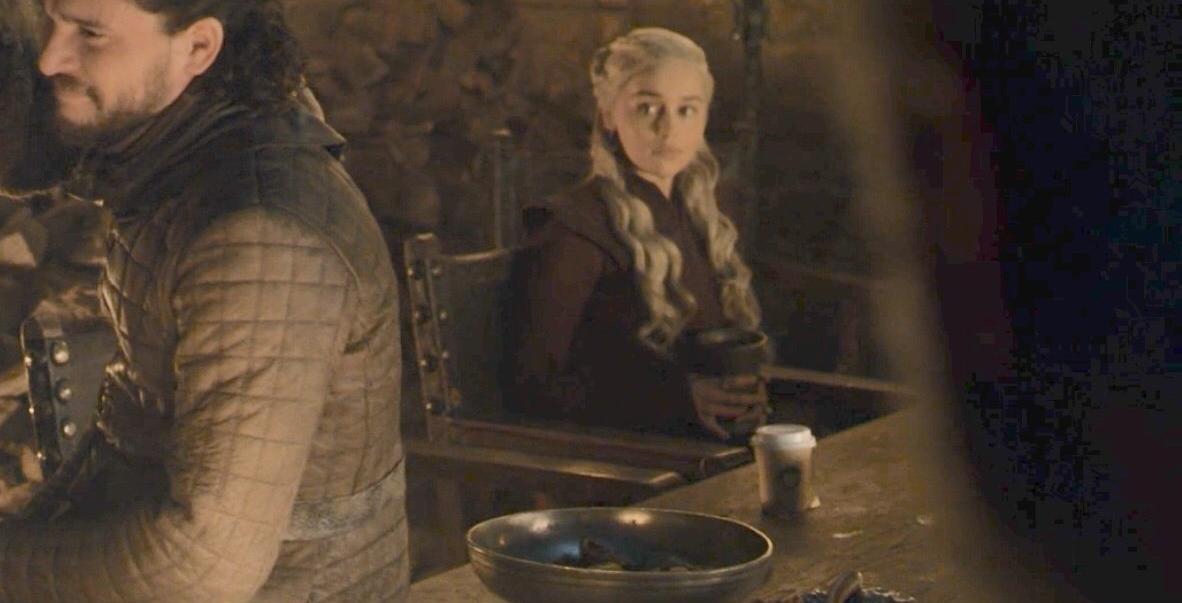 Part of the allure of Game of Thrones is the infinite theories that stem from each episode. In season’s past, fans could ponder Jon Snow’s true heritage or the Night King’s motivation.

After last night’s episode, some eagle-eyed GoT fans could be asking themselves other important questions:

Is there a Dunkin Donuts beyond The Wall? Or a Tim Hortons in King’s Landing?

As viewers tuned in to watch the aftermath of the Battle of Winterfell unfold, some GoT fans have been mocking the popular HBO show after they spotted a prop that doesn’t exactly belong in the Game of Thrones universe.

Early on in episode four of the Game of Thrones final season, a coffee cup can be seen on a table in front of Daenays Targaryen and the Internet, as it often does, has collectively taken stabs at the mistake.

Because in a world full of flying dragons, hundred-year-old witches, and returning from the dead, misplaced coffee cups are just too good to overlook.

my favorite show in the entire world forgot a STARBUCKS COFFEE CUP ON THE TABLE WHILE FILMING pic.twitter.com/60z3pOCfg9

You’re telling me they had TWO YEARS to put together a decent show and they couldn’t even spot the goddamn Starbucks cup in Winterfell??!?! #GameOfThrones pic.twitter.com/8opg7nyydv

ooooh i get it now they all have STARBUCKS names pic.twitter.com/SSj5skShLo

Daenerys Stormborn of House Targaryen, the First of Her Name, Queen of the Andals and the First Men, Protector of the Seven Kingdoms, the Mother of Dragons, the Khaleesi of the Great Grass Sea, the Unburnt, the Breaker of Chains, and Drinker of Pumpkin Spice pic.twitter.com/BOPdolRhXz

Dany: “It’s Daenerys with a Y”
Barista: “Gotcha” *writes Yaeneris on the cup”

you think daenerys is a soy or almond milk kinda girl when she gets her starbucks fix?

that starbucks cup is part of sansa’s master plan to take down dany i’m calling it rn #GameofThrones pic.twitter.com/ZDi7nEQ5tB

I would like some giant’s milk with my Latte, thanks #GameofThrones pic.twitter.com/GE5Zyffirk

too busy with their cameo to notice the coffee cup #gameofthrones pic.twitter.com/lb6V195JIR

First the truck and now the coffee 🤔😂 #GameofThrones pic.twitter.com/K1g7YjCkDP

If they can’t spot bad writing how are they going to spot a coffee cup? #Starbucks #GameOfThrones pic.twitter.com/uGAMbY65pP

the editors going back to digitally remove the starbucks coffee cup from the latest episode for the dvd release #gameofthrones pic.twitter.com/0IXfy6rTZM

guys this starbucks coffee fiasco isn’t nearly as bad as the time Jaime had both his hands AND was holding a coffee a couple seasons ago #GameofThrones #DemThrones pic.twitter.com/FKaPVslxvO