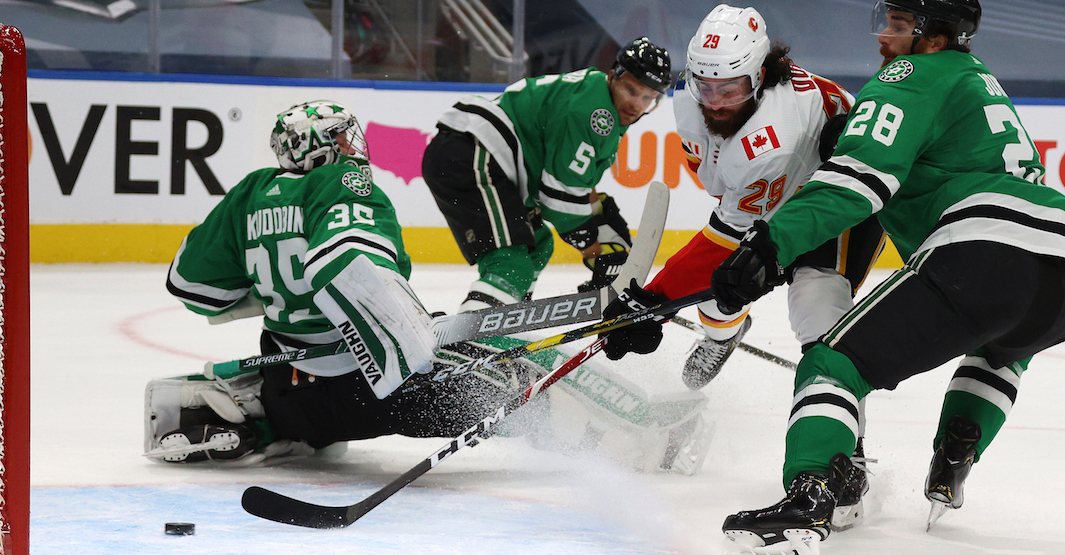 One down, three to go.

The Dallas Stars were sure to be a step up in competition from the banged-up Winnipeg Jets, but the Calgary Flames didn’t seem phased. The Flames controlled the pace of play in Game 1 and fended off a late Dallas power play to win Game 1 by a 3-2 score.

Dillon Dube scored the first two goals for the Flames, and the 22-year-old now has four points in five games this postseason.

Dube’s first goal came on the power play after finishing a nice tic-tac-toe play with a one-timer that beat Anton Khudobin.

With the primary assist on the goal, Milan Lucic joined Jarome Iginla as just the second player in Flames history to start a postseason on a five-game point streak.

The Flames are now 6-for-14 on the power play this postseason, and interestingly, all six of those goals were scored by a different player.

The second Flames goal came later in the period and was even nicer than the first, as Dube rushed through the neutral zone, bursted past the Stars’ defence, and tucked the puck around Khudobin and in to give the Flames a 2-0 lead.

The Stars tied it in the second period with a pair of goals just nine seconds apart. Both were low-danger shots from the point that managed to find their way in; the first off a Flames defender and the latter taking a funny bounce off the ice that Cam Talbot couldn’t track properly.

The Flames were able to restore the lead five minutes later though when Rasmus Andersson’s shot beat Khudobin over the blocker.

The Flames locked it down in the third, allowing only eight shots and killing off a delay of game penalty to Mark Giordano in the final minute to solidify the win.

The Flames have Wednesday off but will play again Thursday at 8:30 pm when they’ll look to take a commanding 2-0 lead in the best-of-seven series.