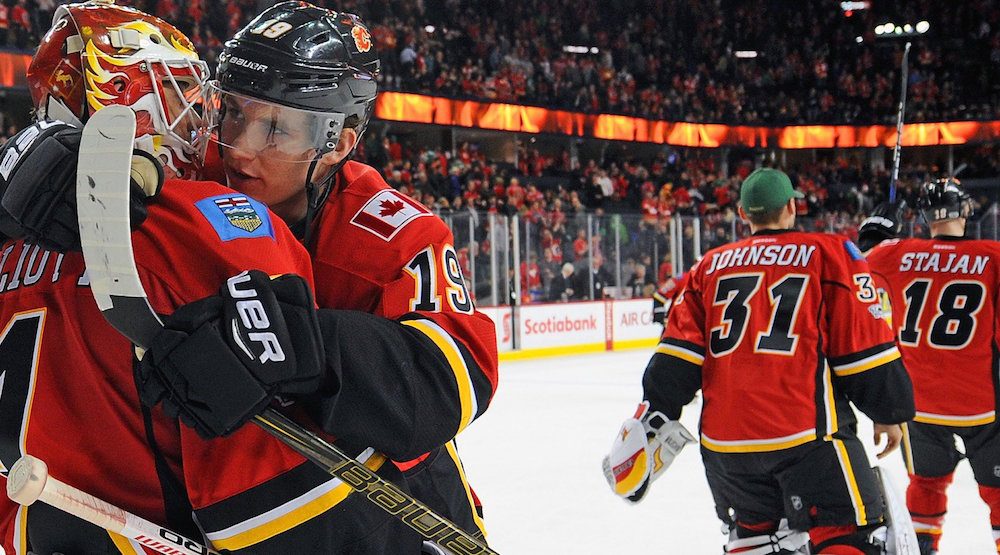 It’s become almost a predictable step in the process of a professional sports team trying to get a new arena or stadium approved.

First it’s submitting a proposal, then gauging public feedback, and finally threatening to leave a passionate fan base if a deal can’t get done. It happened up the road in Edmonton almost five years ago, and now a similar situation is unfolding in Calgary.

Look, the chances of the Flames packing up and moving to a Quebec City or Seattle are about as likely as Brian Burke sporting a half-windsor, highly unlikely but not impossible.

From CalgaryNEXT to Victoria Park to mumblings of relocation, how did we get to this point?

And, what options do the Calgary Flames have for getting a new arena built, while also working with the City of Calgary and taxpayers?

Let’s start with the Scotiabank Saddledome, the main catalyst behind the Flames’ push for a new home.

Built in 1983 as part of the City’s bid for the 1988 Winter Olympics, the Saddledome cost just over $97 million to build, or $213 million when adjusted for inflation.

Housing the Flames for the last 33 seasons, the Saddledome is now the second-oldest with Joe Louis Arena in Detroit set to be demolished.

The last major renovation to the ‘Dome came out of necessity in 2013 after flood waters rose up to the ninth row of the lower bowl and caused significant damage.

Although the building is still viable to host NHL teams, the main concern with the Saddledome is its inability to attract large-scale concerts and performances due to the lower roofline.

Taylor Swift, AC/DC, and Metallica are just a few of the bands over the years to bypass the Stampede City for one or even two show sets in Edmonton.

Ironically, the Saddledome was constructed in part due to the Stampede Corral not being able to attract large musical acts in the 1970s.

The first proposal came in 2015, when the Calgary Sports and Entertainment Corporation presented their pitch for CalgaryNEXT.

To be constructed in the West Village area, the massive project would combine a 19,000 seat NHL arena and a 41,000 seat CFL stadium to house the Flames, Calgary Stampeders (CFL), Calgary Hitmen (WHL), and Calgary Roughnecks (NLL).

Initially, the proposed cost of the project came out to $890 million, with $450 million being funded by Flames ownership and a ticket tax, while the City would be on the hook for $200 million and an additional $240 million community revitalization levy.

However, a report from the City in April estimated the total cost of the project was now at $1.8 billion, with taxpayers expected to contribute around two-thirds of the financing and clean up of the West Village land.

Mayor Naheed Nenshi has been very outspoken about not wanting to burden taxpayers with a billion dollar arena project, if it will have few kickbacks financially down the road.

I'm still out of the country but here are my thoughts on the stadium/arena proposal released today: http://t.co/jdD52lb5xg

CalgaryNEXT is looking to be on its last legs, as council voted recently to pursue a ‘Plan B’ option, which would be located very close to the Saddledome in Victoria Park.

Not much is known about this second proposal, which would be located in a two block radius on the north end of the Stampede Grounds.

Currently a parking lot owned by the Stampede, it’s thought a land swap could be in place to construct a new arena and events centre while demolishing the Saddledome.

10 years ago, Flames execs were talking new arena on Stampede grounds, but that failed so "West Village" was Plan B. This is Plan A redux. https://t.co/LVHUsmaF6Z

There is no word yet on the estimated cost of such a project, but the City has begun talks with Flames ownership about the viability of moving the team a few hundred metres.

Where do we go from here?

The trend for teams wanting a new stadium these days seems to involve an arena project coupled with a downtown revitalization project, connecting restaurants and shopping centres with the main tenant.

Edmonton has done it, Nashville has done it, and Detroit will do it this fall with the opening of Little Caesars Arena.

Calgary is in a different space than these three, as their downtown core has seen revitalization over the last 10 to 15 years already.

With very limited space in Calgary’s downtown, it’s something that Nenshi has been pushing against over the last few years.

After meeting with NHL Commissioner Gary Bettman in March, Nenshi told CBC Calgary, “The calls to our office, the emails, the comments have been, I would say, 99.999997 per cent saying please Mr. Bettman stay out of it and no, there should be no public money for this.”

At this point it’s not a question of if the Flames need a new rink, it’s where would that be located?

The West Village, Victoria Park and yes, even other markets such as Quebec City and Seattle have been floated.

During an interview with Sportnet FAN 590 in Toronto earlier this year, Flames President CEO Ken King stated, “There would be no threat to move, we would just move, and it would be over. And I’m trying my level best to make sure that day never comes, frankly.”

I don’t for a second buy that the Flames would pack up their sticks and gloves and ditch town under the darkness of night, but Canadian NHL teams have been relocated before.

The good news for Flames fans is that there are options for a new arena in their backyard, it’s now a question of how much they are willing to pay to keep it here.