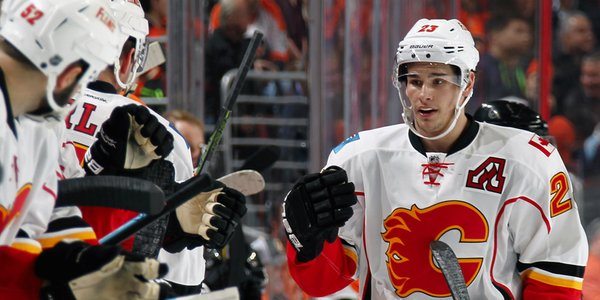 Good things come to those who wait.

That was the case for Flames fans when waiting for the signing of RFA Sean Monahan, who has now signed on for seven more seasons. His new contract comes with a reasonable cap hit of $6.375 million per season.

Monahan deal is right where it should be. Not a bargain but it's market value and they needed to get him signed long term. #Flames

This deal isn’t exactly a steal for the Flames, but it certainly isn’t an overpayment. When looking at some of his comparables last month I suggested a number for Monahan between $6-6.5 million on a long-term deal, so this is right in that range.

Monahan’s contract cost is slightly above most of his comparables (Mackinnon is $6.3 million), but he has also played more games and scored more goals, making him slightly more proven than his comparables. The 21-year-old has 80 goals and 159 points in 237 NHL games, and has increased his production each season.

The overall contract total of just over $44 million is the largest total value contract ever given out in the franchise’s history. The AAV of $6.375 million makes him the second-highest paid player on the Flames, next to Mark Giordano’s $6.75 million. Monahan is also now the only player on the Flames signed through the 2020-21 season.

Given his resume, Monahan's $6.375 million AAV is a team-friendly number in my eyes. Good term too. Took a while but the GM doing his thing.

Not that there was ever much question about whether or not the Flames would opt for a long-term contract, but the seven year length is a major plus for the Flames. That gives them a large window to put together a championship team before Monahan will be signing his UFA deal at age 28.

I'd expect Gaudreau deal to end up looking very similar to Monahan's. Flames see this as Kane/Toews situation.

The looming question over all of this now is how, if at all, does this signing affect the upcoming extension for Johnny Gaudreau?

Some speculate that Gaudreau could get a deal in the same ballpark as Monahan, but given Gaudreau’s elite production last season (78 points in 79 games), don’t be surprised to see Gaudreau get an extra million per season or so.

Gaudreau’s combination of young age and elite production really only provides one decent comparable; Vladimir Tarasenko. After producing 73 points in 77 games in 2014-15, Tarasenko signed an eight-year deal worth $7.5 million annually. Anything under that would likely be considered a steal for a player of Gaudreau’s calibre.

We’ll worry about that later though. Right now, it’s just good to know that we’ll have seven more years of Monahan.