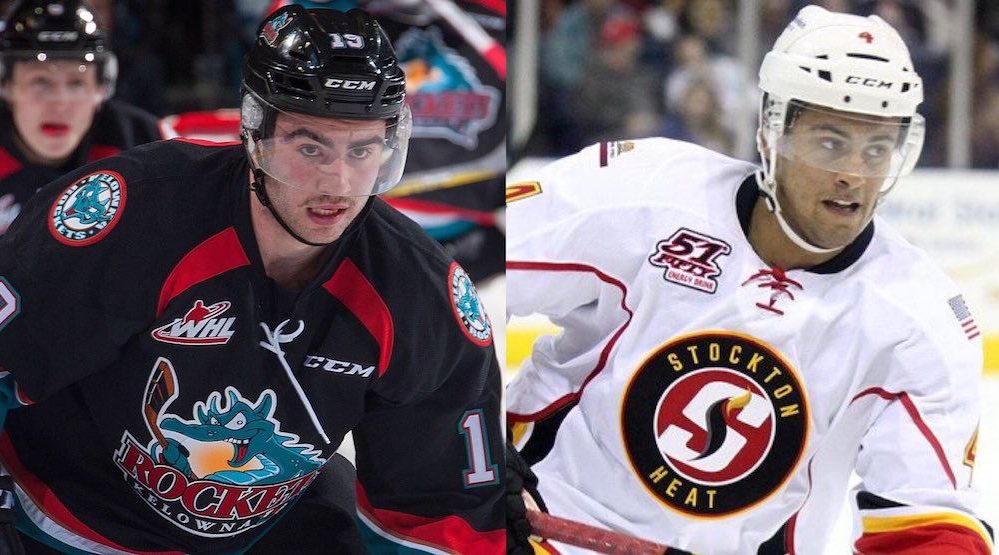 Many families around the holiday season are getting ready to partake in yearly traditions, from opening one present on Christmas Eve to drunkenly exchanging political views with relatives that you only see only once a year.

But, one binding tradition in December for Canadians includes sitting down in front of a television and cheering on some of the best teenaged hockey players across the globe.

We’re just days away from the opening of the 2017 World Junior Hockey Championships in Toronto and Montreal, with prospects from all 30 NHL teams ready to show off their abilities to the world.

And, it’s a safe bet to say the Calgary Flames are going to be well represented when the puck drops on the World Juniors on Boxing Day. Two prospects in Kelowna Rockets forward Dillon Dube and Stockton Heat defender Oliver Kylington will suit up for Canada and Sweden, respectively at the tournament.

This will be the first appearance at the World Juniors for the 18-year-old Dube, who was a second round pick of Calgary’s this past summer. Viewed as one of many bubble players to make the team, Dube earned the confidence of Head Coach Dominique Ducharme through a strong selection camp.

“Once I finally got the call from our room that we were allowed to come down to the meeting and that we were selected, it was the biggest relief I’ve ever had for trying to make a team,” said Dube. “There was lots of pressure on it I guess, because the whole country is watching and it’s always been in the back of my mind to make this team. So, to get that was probably the biggest honour I’ve ever had to make a team.”

Dube’s chances of cracking Hockey Canada’s squad took a major blow at the beginning of the WHL season, as the Kelowna Rockets forward suffered a fractured right knee that forced him to miss seven weeks and the Canada-Russia CHL series.

“It was a little nerve-wracking I think, when I first got my injury I wasn’t 100% sure of even being able to play or get an opportunity. So, once I found out that I had the opportunity to at least get to the selection camp, [that] was a great feeling. I didn’t want to holdout and say my injury was the thing that held me back, so I think to get there and put everything I had was good, and might have even helped me with energy throughout the camp.”

Cochrane kid Dillon Dube is the first Flames forward prospect to crack Team Canada's roster for the World Juniors since Greg Nemisz in 2010.

This won’t be Dube’s first time wearing the maple leaf, as he played for Canada at the 2015 Ivan Hlinka Memorial Tournament with seven of his current Canadian teammates.

The Cochrane, Alberta product made it well known how honoured his is to represent his country on home ice.

“It’s hard to describe. It’s the one you’ve always been watching as a little kid, it’s the biggest hockey thing over Christmas that everybody wants to watch. To have my family here, and to have them a part of it is pretty great. I’m excited to get the tournament started and see what happens from there, but I just can’t wait to hit the ice in the first game.”

Canada is 2-0 in exhibition play, but Dube and Canada’s coaching staff agreed that the quick starts over Finland and the Czech Republic haven’t translated into full 60 minute efforts yet.

And, Canada will need to be at their absolute best as they open up preliminary round play against Russia on Monday.

“We have one more game in our exhibition, so we’re really going to focus on that and lead up to that Russia game because obviously they’re a top team in this tournament. There are no easy games leading into it, so I think our game [Friday] will be a big one to sharpen up on, hopefully leave with some positive notes there, and really be feeling good about ourselves heading into that game.”

As for Sweden, their defensive core on paper is slated to be one of the most dynamic in the tournament with Kylington leading a group that includes Gabriel Carlsson and Jacob Larsson.

His experience playing in the AHL will also be a huge boost, as he is one of the few players in the tournament to play professionally in North America.

“It was great news to hear,” said Kylington. “You always get happy when the national team calls for you and wants you to play. So, it was a good feeling and I’m excited to join the team, and play in the World Juniors.”

This will be Kylington’s first taste of World Juniors action, as he was left off Sweden’s preliminary roster last December while battling injury. Despite missing last year’s edition, Kylington’s previous experience with the national team could serve as a valuable asset.

“I know the guys pretty well, I played with a lot of them in Sweden. I played early Juniors with them with the Sweden U16, U17, and U18 [teams]. So, we have a pretty tight group and I think everyone knows each other. It’s a good mix, and it’s important to get to know everybody when it’s a short tournament.”

It was a disappointing finish for Sweden at last year’s tournament in Helskini, Finland, as the Swedes failed to reach the podium for the second consecutive year, getting blown out in the bronze medal game to the United States 8-3.

#Flames TV catches up with @AHLHeat defenceman Oliver Kylington to talk about his season and the #WJC2017 tournament! pic.twitter.com/5Wzbyoqfs2

Because of this, Sweden will need to rack up some wins early in a tough pool with Finland, Switzerland, Denmark, and the Czech Republic.

Three other Flames are currently in the running for final roster spots, as goaltender Tyler Parsons and defenceman Adam Fox are trying to make Team USA, while CSKA Moscow’s (KHL) Pavel Karnaukhov is looking to do the same for the Russians.

Russia will make their final cuts by the weekend, while the Americans are expected to take until Christmas Eve to announce their 22-man roster.

World Junior games officially get underway on Boxing Day, with Sweden facing Denmark, Finland battling the Czech Republic, the States squaring off against Latvia, and Canada renewing their rivalry against Russia.