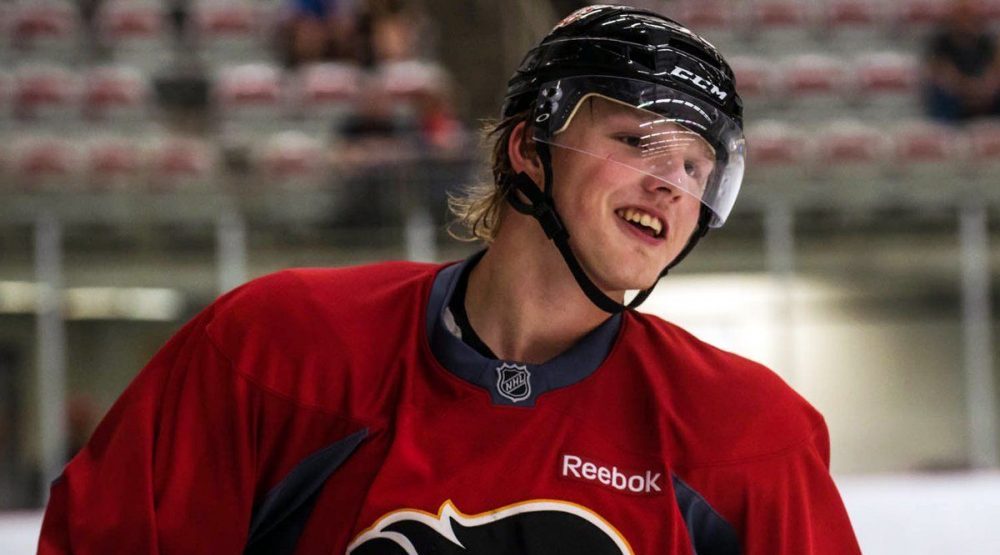 As the NHL becomes smaller, faster, and more skilled, the value of an elite power forward seems to rise by the year.

The combination of imposing size and goal scoring touch is one coveted for most teams around the league, with the Calgary Flames being one of those clubs looking to gain some physicality.

Rather than combating this issue through free agency or trading, it appears the Flames are hoping to play the long game with one of their later round draft picks.

The son of longtime HPK Hameenlinna captain Marko Tuulola and brother of Chicago Blackhawks prospect Joni Tuulola, Eetu has flown under the radar of some scouts over the course of the 2015-16 season.

Playing most of the year with HPK’s U20 team, the right winger scored a respectable nine goals and 14 points in 29 regular season games before being called up to the senior men’s club. Tuulola only registered one assist in 10 games with the big team, but those types of figures aren’t uncommon for teenage players enjoying a cup of coffee with the men’s team.

Tuulola ultimately got his first chance to make an impact in front of scouts consistently at the 2016 IIHF World U18 Championships, suiting up for Finland in Grand Forks, North Dakota.

He was able to find the back of the net twice, and added two more assists to close out the seven-game tournament with four points and a positive plus-minus, along with a gold medal.

“He likes to score and he’s got some work to do on his skating, but he rumbles up and down the wing and he goes to the net,” Flames Director of Amateur Scouting Tod Button said. “He’s a hungry, hungry kid going to the net trying to score goals.”

That sentiment must have stuck with Brad Treliving and the Calgary brass, as the Flames chose the sizeable Finn with their 156th overall selection.

Tuulola is not only largest Flames forward prospect, but coming in close to 230 pounds, he would be the heaviest Flame on their opening night roster. Now that’s not to say that Tuulola is physically ready to handle the daily rigours of the NHL lifestyle, but there is promise in the 6th rounder.

It also seems like Tuulola is going to be jumping across the pond for his first year as Flames property.

In June, the WHL’s Everett Silvertips took a chance on the Finnish bruiser with the 40th selection in the CHL Import Draft. That gamble looks like it could pay off, as HPK posted on their website earlier this month that Tuulola would be leaving the organization to play for the Silvertips in 2016-17.

Have confirmed with the club that Eetu Tuulola has agreed to a contract with Everett. Barring anything unforeseen, he'll be a Silvertip.

The move to the WHL presents an interesting chance to grow his physical and skating game. Make no mistake that Tuulola is likely a project player for Calgary, and a few years on the North American ice surface could build some confidence into his complete game before he’s ready to make the move to professional hockey.

Fast forward to the Flames’ rookie development camp in early July, which featured many of Calgary’s top up and coming players such as Mark Jankowski, Oliver Kylington, and recent 6th overall pick Matthew Tkachuk. In his first game wearing the Flames crest, the 18-year-old netted a hat-trick and had the crowd at Winsport buzzing about his physical, offensively skilled performance.

The surprise standout of @NHLFlames scrimmage for me is Eetu Tuulola. #Flames 6th-round pick has great size (6'3", 225 lb), skill to match.

Both spectators and media began asking the question, ‘What are the chances of this sixth round pick becoming a full-time NHL forward?’

From a statistical point of view… not great.

Another area that Tuulola might find some troublesome is the actual position he plays. Listed as a right-winger, Tuulola will have to jump past players like Hunter Smith, Austin Carroll, and Garnet Hathaway to get a look in the NHL. Calgary has also been stocking up players on the right side through trades and free agency over the past two years, with Troy Brouwer, Alex Chiasson, and Linden Vey acquired this year, along with Michael Frolik last year.

It’s easy to point out his later round selection as a bad omen for his likelihood of becoming an NHL regular. But, scouts from NHL Central Scouting, International Scouting Services, and Future Considerations have agreed that Tuulola has the potential to become a serviceable, if not dependable, depth player down the road for the Flames.

Will Tuulola turn into the next Milan Lucic or Rick Nash? Chances are probably not, but with a core of Gaudreau, Monahan, and Bennett all under 200 pounds, a little meat on the bones never hurts.