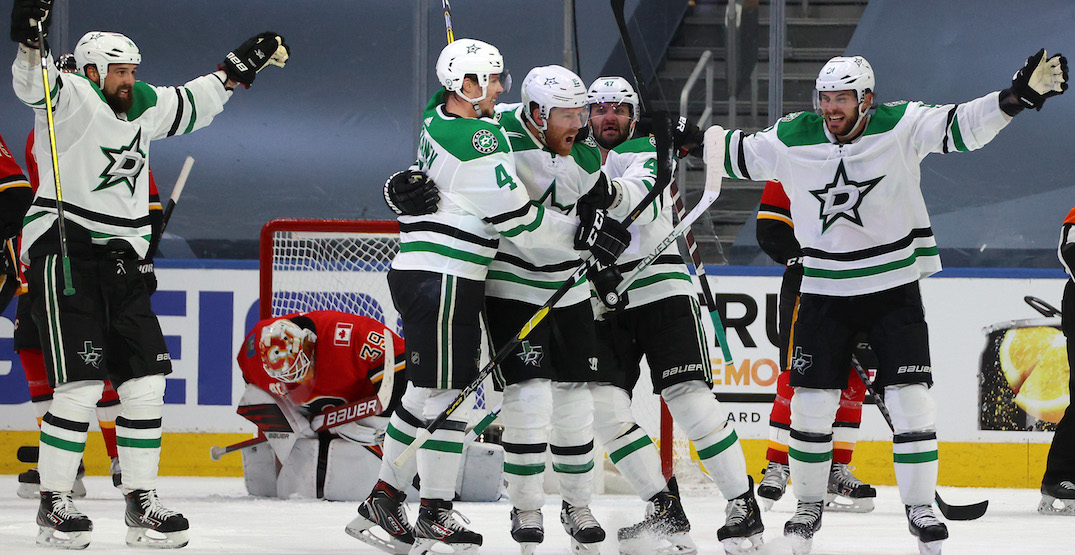 In a thrilling back-and-forth affair, it was the Dallas Stars who pulled out the overtime win over the Calgary Flames in Game 4 by a final score of 5-4. The series is tied 2-2.

Much like in Game 2, Dallas showed more late-game heroics towards the end of regulation in this one. Trailing the Flames 4-3, the Stars were able to sustain significant pressure in the final few minutes of the third, leading to Joe Pavelski’s game-tying goal with just 12 seconds remaining — his third of the game. That made it 4-4 in order to force the extra frame.

Then in overtime, it was Stars’ defenseman John Klingberg who was able to notch the game-winner, beating goaltender Cam Talbot off of a one-timer on Dallas’ 62nd shot of the game.

Despite both teams mustering their fair share of offense throughout the night, Dallas was able to dictate play down the ladder half of regulation in Game 4 and into overtime. The Stars threw everything they could Talbot’s way, including the kitchen sink, outshooting the Flames 62 to 40.

“I thought we played a good game,” Flames forward Sam Bennett said during a post-game press conference following the loss.

“I thought our penalty killers and defenders did a good job and it was unfortunate that they were able to score one in the last 10 seconds, but that’s playoffs.”

With Matthew Tkachuk still on the shelf, it was Bennett who stepped into the spotlight for the Flames and he had himself a game. Bennett was an offensive force, scoring two goals and adding an assist.

His best highlight of the night was scored off an absolute laser beam just four minutes into the second period to tie the game up at 2-2. With the puck rolling, Bennett was able to clap one home from the top of the circle – a knuckle puck that would make Mighty Ducks movie fans proud.

Tobias Rieder also continued his strong play while killing penalties, scoring another shorthanded tally to put his team up 4-3 early in the third.

From 🇩🇪 with love. pic.twitter.com/Jh8wOeRVqn

All three of Rieder’s goals this postseason have come while playing down a man – a player who only scored four goals total during the regular season.

The three goals that Rieder has notched this postseason mark the first time in league history that a player has scored their first three career playoff goals while shorthanded.

The momentum was back-and-forth throughout the game, with several lead changes and multiple scoring chances for both teams, however, a parade to the penalty box didn’t work in Calgary’s favour, despite the one shorthanded goal.

Spanning over the second and the third periods, Calgary took five straight penalties, which helped Dallas gain just enough momentum to put the pressure on and eventually tie things up.

Calgary was able to regroup and find their legs for the overtime period, generating several good chances, but could not seem to solve Stars’ goaltender Anton Khudobin.

“That back-breaker at the end, we can’t give that one up,” said Flames’ forward Derek Ryan after the game. “The overtime was pretty even, I thought both teams had a lot of good chances, but they just happened to get one.”

The series has seen a lot of hockey in the last 60+ hour period, including back-to-back games on Thursday and Friday as well as the afternoon clash – plus overtime – on Sunday. The teams will get a much-needed day break from game action before the grind continues in what has become a best-of-three series from here on out.

Ryan added that the players have already shifted their focus to having a good day of practice tomorrow before a “pivotal” Game 5, which is set to go on Tuesday. The start time for the August 18 matchup has yet to be announced.