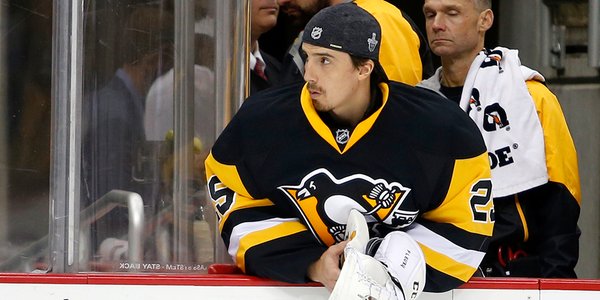 Fleury got injured late in the season, allowing Matt Murray to take the #1 job in the playoffs. Fleury received just one start in the postseason, but don’t let that fool you. He’s put up career-best numbers in his last two seasons, including a .921 SV% in 58 games this year.

Rutherford: Had to be "very difficult" for Fleury to spend most of the playoffs on the bench.

Trading Fleury now makes sense for everyone involved. With the upcoming expansion draft (likely after next season), teams will want to avoid having two quality goaltenders since only one can be protected.

After Matt Murray’s cup run all-but cemented him as Pittsburgh’s starter for the future, Fleury has looked like the odd man out.

Add in that the Penguins are currently $2.5 million over the salary cap, and their want to trade Fleury turns into a need.

From a Flames perspective, Fleury’s contract, age, and ability makes him an ideal trade target.

The 31-year-old Fleury has three more seasons at a reasonable $5.75 million cap hit. He’s a proven starting goaltender and his age shouldn’t be a factor just yet.

He’ll be 34 when the contract expires, and after three seasons the hope will be that either Jon Gillies or Mason MacDonald is ready to take over as the starter.

Fleury could be traded in his final year, re-signed to a cheaper contract, or just released to free agency after his third season.

The value of Fleury

It’s difficult to figure out how much value goaltenders have on the trade market. Starting goaltenders don’t get traded too often and when they do, the returns have varied greatly.

In this situation, there’s other factors to think about too. The upcoming expansion draft combined with the Penguins’ desperate need for cap space puts the Flames in a pretty good bargaining position. It also helps that there are other goaltending options available, either via trade or free agency.

The Flames have a lot of cap space to work with, and if they don’t send a cap dump back in a Fleury deal, that alone would provide some value to Pittsburgh.

The Flames also have a lot of draft picks to work with. In addition to all their own picks, they have a couple of 2nd-rounders acquired from the Kris Russell and Jiri Hudler trades.

The team could afford to trade one or two of those picks in combination with a prospect (perhaps one of the young goalies), which could act as a good starting point for a Fleury deal.

#Penguins face interesting decision in net. Fleury has limited no-trade clause but has to provide green light list of 12 teams by the 15th.

The other thing to consider in all this is that Fleury does have some say in it all. He has a limited no-trade clause in his contract, where he can submit a list of 12 teams he cannot be traded to.

If the Flames are one of those twelve, then all this speculation means nothing.

Even if that’s the case, there are other options available. They just don’t have an age, ability, and contract that makes this much sense.