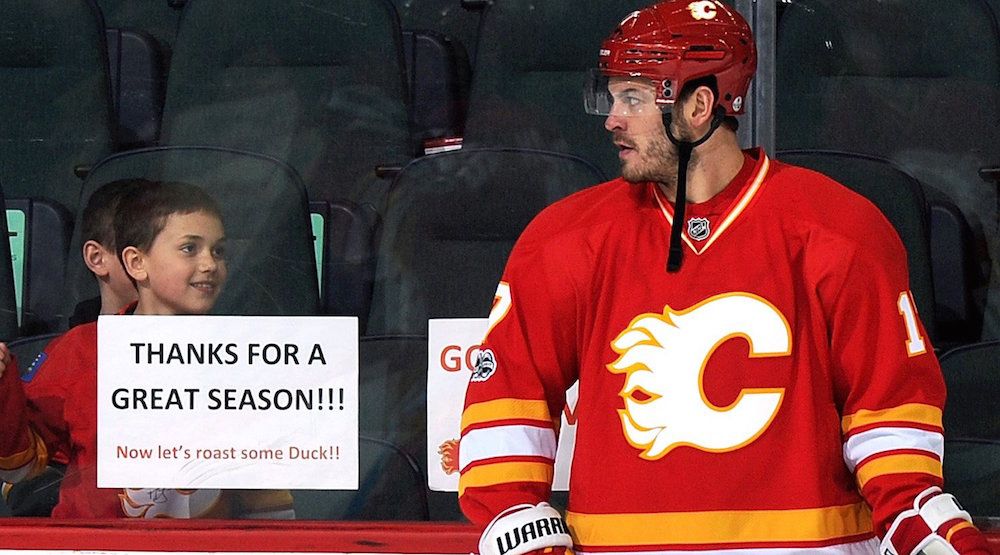 If Flames fans didn’t know who Nate Thompson was before the weekend, they were introduced to the nine-year vet on Sunday.

Thompson scored with just over eight minutes remaining against the Los Angeles Kings, tying the game at 3-3 and effectively ending all hope of a Calgary-Edmonton matchup in the first round of playoffs.

By clinching the Pacific Division, the Ducks will take on the Flames in Round 1 and will look to continue their dominance at the Honda Center.

But all is not lost for Calgary as they begin their playoff journey on Thursday in sunny California.

Here are five ways the Flames can exorcise their demons and upset the Ducks.

Priority number one for Calgary will have to be getting a win at the Honda Center and ripping the monkey off their back that’s been in place since January of 2004.

Although it will be a tall task, it’s not impossible as Calgary actually won a playoff game in Anaheim during the 2006 Stanley Cup Playoffs, something that is often forgotten about by Flames fans.

A big part of the Flames’ 25-game losing streak has been trying to get past the mental hurdle of possibly failing to be the team that ends the drought.

If Calgary is able to pick up a win on either Thursday or Saturday, that would better allow them to focus on the rest of the series without the cloud of the losing streak hovering above their heads.

Being the lower seeded team, the Flames will need to win at least one game in Anaheim if they want to advance, and I have a tough time believing the Ducks would squander a 2-0 series lead.

Calgary’s power forward pest has been a revelation for the Flames this season, as Matthew Tkachuk has established himself as a dynamic offensive producer with a knack at getting under the skin of opposing players.

If Calgary is going to be successful in this series, Tkachuk will have to continue to be a grinder on the ice without going over the line.

"He just says you have to play hard … play the way you've played all season." – Matthew Tkachuk on what his dad told him a/b the playoffs pic.twitter.com/70NkQUlHFO

Over the first half of the season, Tkachuk displayed a lot of promise but also led the team in penalty minutes and penalties taken. Since then, he has done a better job of controlling his emotions and goading the opposition into retaliatory minors.

Of course, there was the whole Drew Doughty incident where he was suspended two games from the NHL, which was a fair punishment for his careless elbow.

However, the following meeting between Calgary and Los Angeles was Tkachuk’s coming out party, as he drove the Kings crazy with his physical play and chirping ability.

Matching up against Corey Perry, Kevin Bieksa, and Ryan Kesler will be a challenge, but the St. Louis native has all the tools to contribute physically and mentally.

A large part of Calgary’s offence this year has derived from the man advantage, as they finished the regular season with the league’s 10th-best power play at 20.2%.

They’ll have their hands full in this series however, as the Ducks had one of the top penalty kill units in the NHL sitting at a 84.7% success rate, good enough for fourth overall.

Anaheim found great success from their pair of Ryans in Kesler and Getzlaf, with Jakob Silfverberg and Antoine Vermette also getting some strong minutes throughout the season.

With Anaheim’s Cam Fowler out of the lineup for the series, Calgary has a window to take advantage on the power play with Sean Monahan and Johnny Gaudreau firing pucks at John Gibson.

The Flames found the back of the net 52 times on the power play this season, and will need to continue their strong play with the extra skater to generate offence.

4. Brian Elliott standing on his head

It’s been a tale of two seasons for Calgary’s Brian Elliott, as he finished off the season with Vezina-like numbers compared to his dreadful start to the year.

Elliott finished the year with a 26-18-3 record, 2.55 goals against average, and a .910 save percentage and was a stabilizing force between the pipes down the stretch drive of the campaign.

As displayed last spring with St. Louis, Elliott has the potential to steal games during the playoffs and will most likely need to do so in a few games against the Ducks.

Getzlaf, Kesler, Perry, and Rickard Rakell all broke 50 points this season, with Rakell scoring a team-best 33 goals on the year.

In two games against the Ducks this season, Elliott has struggled with a 0-2 record, 3.69 GAA, and a .868 save percentage.

Chad Johnson is still a strong option for Calgary, but this is Elliott’s crease now and will have to maintain his excellent play in his first playoff series as a member of the Flames.

Although 2016-17 wasn’t the best season offensively for Monahan, he still managed to tickle the twine 27 times for the Flames.

Known as a great player at the Scotiabank Saddledome, the Flames will need their premier, two-way centreman to excel at shutting down Getzlaf and Kesler down the middle and contribute on the scoresheet.

Monahan has played his best hockey this season at home, scoring two-thirds (18) of his goals this year on Calgary ice.

With their struggles over the years at the Honda Center, it’s reasonable to think that the Flames will need to win at least two of their home playoff dates to have a shot at taking down the Ducks.

Monahan will need to be a big part of that, and has showed the ability to play well against Anaheim with three points in five games this year.