Getting swept in the first round of the playoffs was a tough pill to swallow for the Calgary Flames, especially since it came at the hands of the Anaheim Ducks.

These two clubs have formed a bit of a (one-sided?) rivalry over the last few years, with Kevin Bieksa, Micheal Ferland, Ryan Kesler, and Matthew Tkachuk stirring the pot.

With the NHL rumour mill running strong ahead of the Vegas expansion draft, NHL Draft and free agency, the Flames and Ducks potentially could be trade partners in the not too distant future.

In his recent 30 Thoughts article, Sportsnet’s Elliotte Friedman reported that the Ducks are looking at trading one of their defencemen, in the hopes of getting a sizeable return rather than losing one in the expansion draft.

Both Hampus Lindholm and Sami Vatanen suffered torn labrums in the playoffs, and could be potential trade targets for other teams over the off-season.

Though it’s believed that Vatanen is more likely to move than Lindholm, who held out for a monster six-year, $31.5 million contract last summer.

Lindholm's rehab could be 4-5 months. Sami Vatanen, who also had a shoulder injury, will take even longer for surgery/rehab.

He then elaborated that Anaheim “likes Sam Bennett a lot,” however added that it could be a risky move trading within the division.

In an interview with Sportsnet FAN 960 this week, Friedman said either Vatanen or Lindholm could be a fit in Cowtown.

“I think Calgary would be interested,” said Friedman. “You know Brad Treliving is looking for another top-four defenceman, those guys would certainly qualify. I’ve heard that the Ducks like Sam Bennett, I’ve heard there’s people in that organization who like him. So, I could see the possibility of something being there.”

So, how did we get here with Bennett, the highest drafted player in franchise history?

It hasn’t been the smoothest start to his career, as he’s only been able to muster 31 goals and 63 points over 159 games over three seasons.

That included a regression from 36 points in his rookie season to just 26 under Glen Gulutzan last year.

A lot of this can be chalked up to Bennett still struggling to play top-six minutes, centring the third line with Troy Brouwer and Kris Versteeg for most of the season.

But, Flames fans have become slightly disheartened with the slower than expected progress of the Holland Landing, Ontario product.

Mix in the fact that Leon Draisaitl, who was picked one spot ahead of Bennett in the 2014 NHL Draft, exploded for 77 points last season and seems to have grown into a bonafide star with Edmonton, it’s easy to see why Flames fans are becoming a bit concerned.

This begs the question if Calgary should pull the plug on the Bennett experiment for a proven top-four defender in Vatanen or Lindholm?

While both Europeans are tempting commodities, neither are worth giving up on a developing player like Bennett.

I find a lot of similarities between Bennett and his teammate Mikael Backlund, especially in their early years. 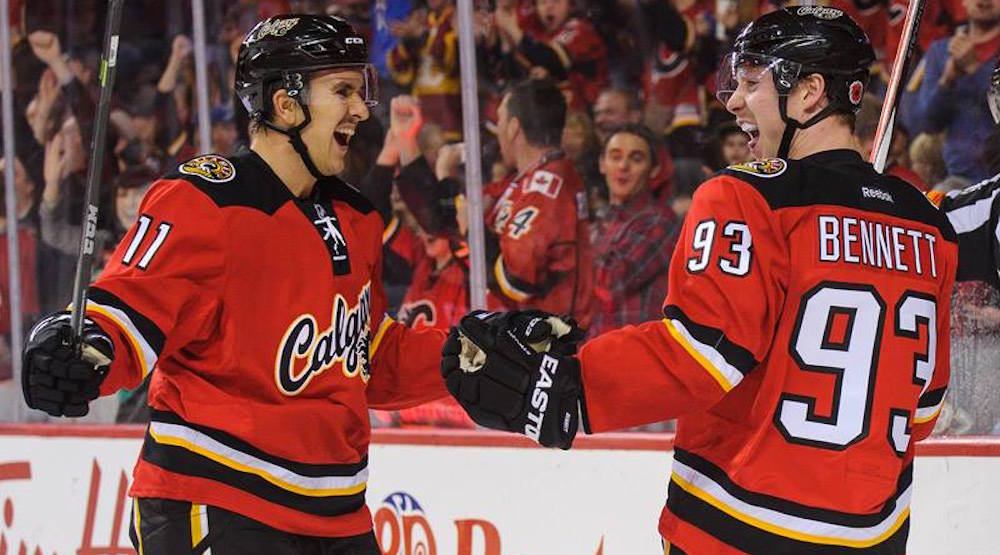 Both were first round draft picks expected to contribute in big ways on the scoresheet, but have taken more two-way responsibilities and are performing in depth roles.

Now, Flames fans are probably hoping it won’t take Bennett eight seasons to reach these numbers, but the comparables are there.

Bennett was also a bright spot for the Flames in their four-game series against Anaheim, finding the back of the net a few times and creating more offence than we saw from the 20-year-old all season.

Bennett is set to celebrate his 21st birthday later this month, and should have all the time in the world to develop his touch around the net if Calgary is patient.

Last year Bennett ranked 24th on the Flames in PDO, otherwise known as a player’s luck calculated by shooting percentage and the team’s save percentage. With a normal percentage set at 100, Bennett posted a season average of 97 which says the bounces haven’t been going his way.

Although the Flames need some help on the blueline, there are other ways to go about improving through free agency or developing a prospect in the system, without having to sacrifice a player who remains a big part of the future such as Bennett.