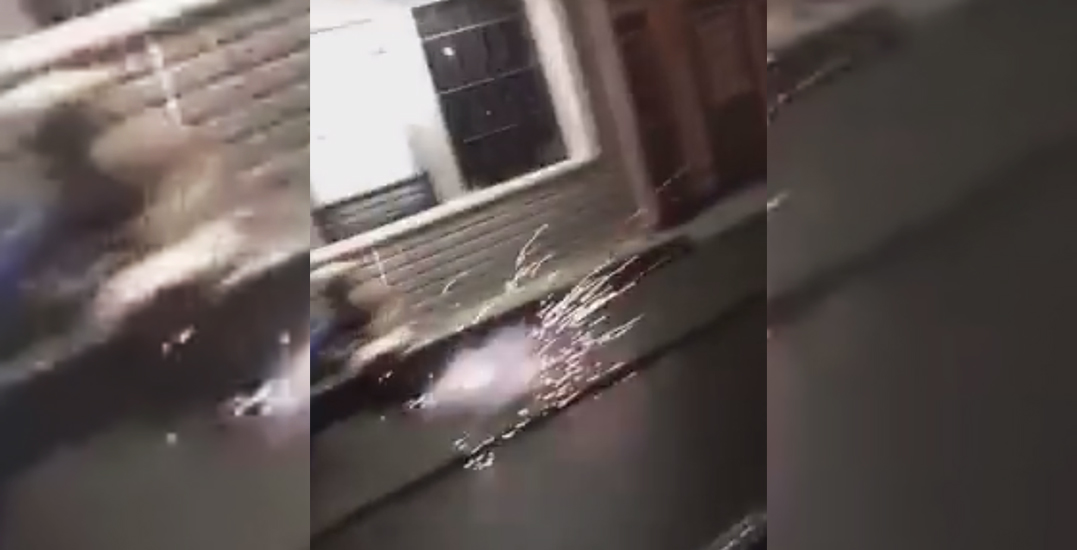 Police have launched an investigation after receiving reports of firecrackers being thrown at homeless people in BC’s Fraser Valley.

The eight-second clip, which was captured via Snapchat, was uploaded with the caption “Make em dance.”

The video shows people in a car throwing a small explosive out a car window, which then detonates near someone on the sidewalk.

Bailey Istace, the Facebook user who shared the video, posted that “some immature teenagers decided to throw some highly flammable firecrackers (m80s) at a homeless woman sleeping outside a storefront.”

“A couple more inches towards her stuff and it would have all caught on fire in seconds.”

Police have confirmed with Daily Hive that they’ve received reports of firecrackers being thrown at people sitting on the street in Chilliwack.

“Officers attended to the scene, however, men had left before police attended. We believe they drove away in a dark coloured vehicle. Very fortunately, nobody was injured,” explains Mike Rail from the Fraser Valley RCMP Detachment.

Right now, authorities are continuing their investigation, however, they can’t confirm whether the video shared on social media is the same as their report. Though the video was uploaded onto Facebook the same date that the police report was made.

They also can’t confirm that either individual was homeless, although it could very well be the case.

“We have a few leads that we’re following,” says Rail. “We’re also asking for anyone who has information or video footage to step forward.”