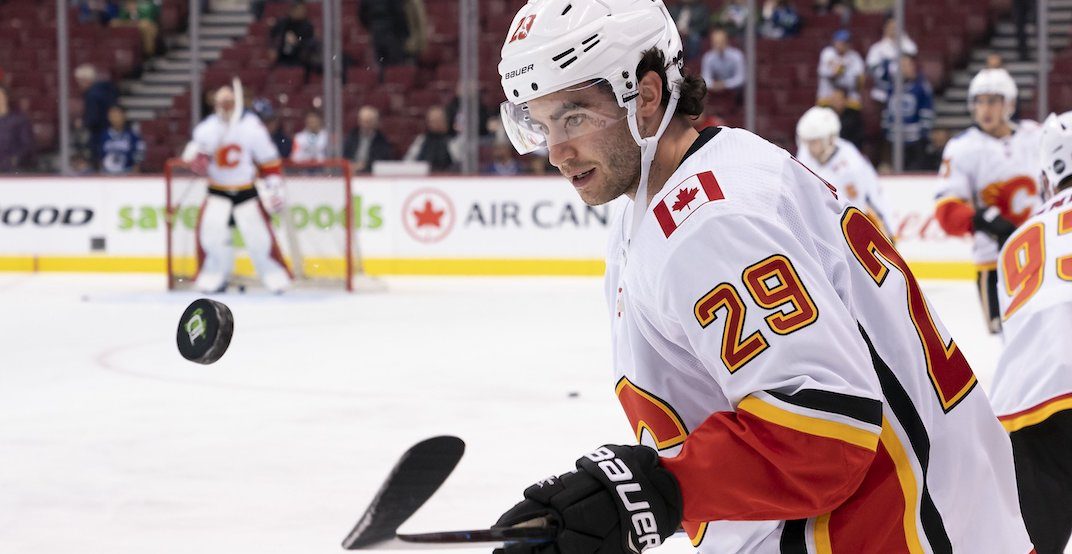 Dillon Dube wasn’t the first shootout pick for the Calgary Flames on Sunday night in Minnesota.

He wasn’t even the second, third, fourth, fifth, or even sixth option.

But when his moment finally came skating in on Wild netminder Alex Stalock, the second-year winger delivered one of the biggest goals of his short NHL career.

How do you Dube, Dillon!? pic.twitter.com/SEY4GaItr8

“At first it was taking a deep breath and relaxing,” Dube told reporters following the game. “I was really happy that [Flames goaltender David Rittich] made that save because it calmed me down a lot knowing I was going. The game’s not over if you miss so that relaxes you a lot.”

Seven rounds into the shootout it was Dube serving up the game winner for Calgary in a 5-4 comeback victory over Minnesota.

It was the Cochrane product’s first shootout winner, but according to Flames interim head coach Geoff Ward you would never know it from the 21-year-old.

“What a move by Dillon,” said Ward. “He came out there with a lot of confidence and made a real solid move to get the win.”

Dube has established himself as a key member of Calgary’s bottom six over the past few months after bouncing between the big club and AHL’s Stockton Heat early in the season.

In 22 games with the Flames so far, the former second round pick has recorded three goals and eight points and has worked his way into the lineup full-time.

It hasn’t all been rainbows and roses for Dube however, as his biggest struggles at the NHL level has been consistency with six of his points this season coming in a two-week span alone in early December.

While the demotion to the press box marked a low point on the season for Dube, he took it in stride as a chance to see the game from a different angle.

“A big part of my game is turning pucks over,” said Dube. “Just sitting up there and watching the game, picking out specific players to watch on both teams was good for me just to be up there and see the game from a different aspect.”

A junior star with the WHL’s Kelowna Rockets, Dube was selected 56th overall by the Flames in the 2016 NHL Draft with a pick acquired from the Dallas Stars in a deal for blueliner Kris Russell.

Dube’s best year in junior came in 2017-18 when he torched the league for 38 goals and 84 points while also captaining Team Canada to a gold medal at the 2018 World Juniors in Buffalo, New York.

The transition to the pro game has been an up and down journey since that gold medal win two years ago, with most nights last season being a battle just to crack the lineup.

“It’s a lot different than junior,” said Dube. “It’s a job and you got to be ready to play every night. You’re fighting for a spot every night and it’s even how it was in Stockton. So, it’s kind of a different mentality.”

Dube’s ceiling is still to be determined, as he showcased in junior that he can be a top line player with elite offensive potential.

What that will translate to at the NHL level is still unknown, but he was drafted with the belief that he could one day consistently net 15 to 20 goals per season.

As for being a first line player with the Flames down the line, that seems like a tall order especially considering the group of talented forwards Calgary possesses such as Johnny Gaudreau, Sean Monahan, Matthew Tkachuk, and Elias Lindholm.

Last week’s deal shipping Michael Frolik to the Buffalo Sabres has opened the door for Dube to get more of a look on the second and third lines with Calgary however, especially with Ward’s proclivity for shaking up the team’s lines.

In almost the same vein, Andrew Mangiapane has seen his offensive skills flourish recently with his promotion to Calgary’s second line with Tkachuk and Lindholm.

Dube has been placed in more of a shutdown role on line three with Sam Bennett and Milan Lucic and doesn’t see any time on the power play, another reason for why he hasn’t been quite as productive as Mangiapane.

But, if a promotion to the top six ever came down the line due to injuries or other circumstances, Dube is the type of player that has enough skill to his game to slot in with the club’s top weapons.

For now, Dube will likely remain locked in on the Flames’ third line providing some energy and offence from time to time.

But the next time Calgary needs a shootout to pick up an extra point, Ward can look down his bench knowing the sophomore is up for the challenge.