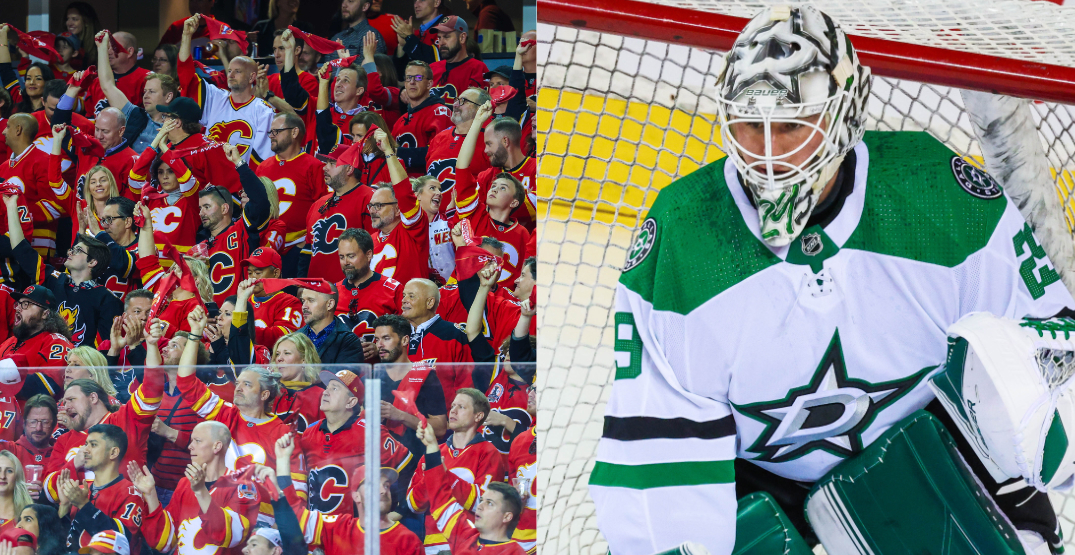 The C of Red was electric.

So much so that even the opposition in Game 1 between the Calgary Flames and Dallas Stars had to tip their cap in a playoff debut that had the Saddledome shaking both pre and post-puck drop.

“It was awesome,” Stars goalie Jake Oettinger offered shortly after Dallas dropped the 1-0 contest to fall back 1-0 in the seven-game series. “Such a great fanbase here in Calgary. I don’t know if I’ve ever been as fired up as I was in the first period there. It was just such a fun atmosphere to play in.

“It’s only going to get better from here on out.”

Understandably, Calgary fans have been starved for a bit of playoff action.

Though the Flames qualified for the 2020 Stanley Cup Playoffs, the city couldn’t host games with the entirety of the postseason played inside a “bubble” in Edmonton.

Dial it back another 16 months, give or take, to the last time the building could host the home side for a playoff tilt.

“It gave me goosebumps on the bench a little bit,” Flames newcomer Blake Coleman said, himself a veteran of two Cup championship runs — including one outside the bubble last year.

Exact same, said the road side.

“The building was electric,” Stars forward Michael Raffl said. “It was an awesome atmosphere to be in. They took it to us, especially the first 10 minutes.”

Lineup announcements prompted an explosion of chants from the hometown faithful, and a belting rendition of the anthem raised the decibel level another couple of notches.

A few early hits from Matthew Tkachuk roared the crowd once again, and Elias Lindholm’s marker five minutes in nearly blew the roof off the 40-year-old building.

A pair of tilts — one featuring Tkachuk and Raffl and a secondary scrap between Rasmus Andersson and Miro Heiskanen — heated the building, too.

A celebratory win after 60 minutes didn’t hurt, either.

“It was fun,” Lindholm said. “The crowd was into it right away, and obviously we had some good energy right away.

“It was fun, even warmup was fun. Got goosebumps, so it was fun.