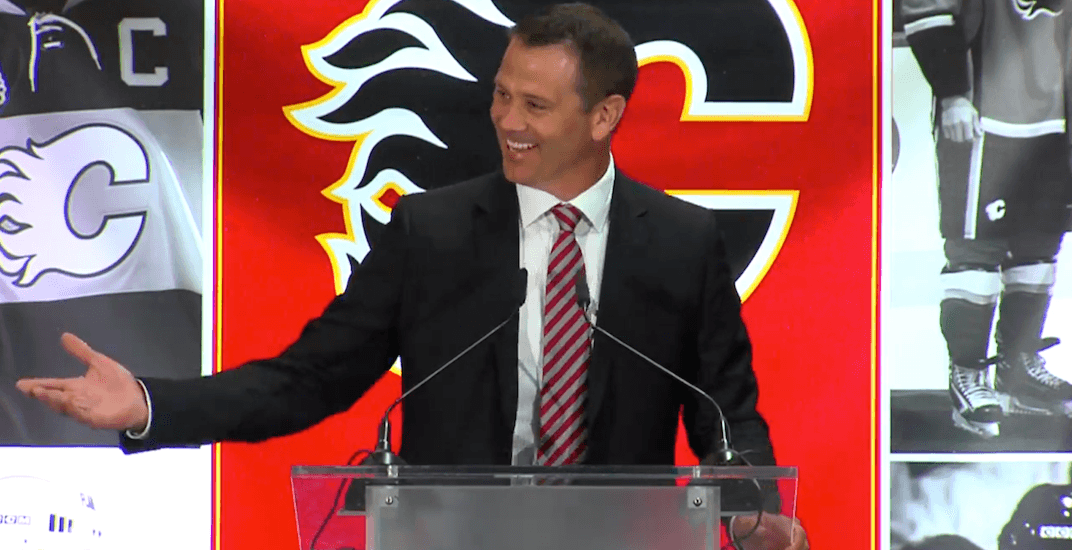 Back in Calgary, with a Flames logo behind him, it just felt right.

One of the best players in franchise history, Jarome Iginla was retiring in the city where he made his name.

And while many great things were rightly said about Iginla’s career and about him as a person, someone needed to cut the tension.

Conroy recalled meeting Iginla, after being traded to Calgary in 2001.

“He beat me up, that year in St Louis, jumped me, but he still beat me up.”

Iginla was less than thrilled about the Flames acquiring another checker, so he had some words of instruction for Conroy when he was put on his line.

“We’re not a checking line,” Iginla said on the bench, telling Conroy that he can go get the puck himself if he tries dumping it into his corner again.

Conroy listened to his new teammate, holding onto the puck and feeding Iginla, who scored on a one-timer later in the game.

“You were better than I thought you were going to be on the first day,” Iginla said to Conroy later on in the press conference.

Another former teammate, Martin Gelinas, shared a story about Iginla rallying the troops before overtime of Game 7 against the Vancouver Canucks in 2004.

“I remember going in the room. it was quiet, nothing was happening,” Gelinas said. “Guys were looking at the floor.

“Jarome said ‘boys, if someone before the series started said that we’d be in Game 7 against the Canucks, we would have been grateful for it. From that point on, the room got lively and excited again. And that’s that belief and that spark that we got from Jarome.”

Conroy remembers it a bit differently.

“I was not so happy,” Conroy said, adding that they had a little sidebar in the dressing room before overtime.

“Right before the faceoff, [Iginla] said ‘Craig, push the puck forward, I’ll grab it, shoot it into the empty net, game over.’ I’m like ‘that’s a good plan, I like it.’ So I push the puck over, he grabs it, just like the plan, he misses the net.”

Iginla, if you’ll recall, had a chance to win the game by scoring his hat trick goal into the empty net with less than 20 seconds to play. He hit the side of the net, giving Vancouver one last chance.

Skating backwards through the neutral zone, Iginla’s stick was chopped out of his hands, causing him to trip.

“If anyone’s ever seen Jarome skate backwards, there was no stick,” Conroy said with a twinkle in his eye. “He just fell. For one of the greatest players of all-time, he can’t skate backwards.”

Conroy eventually got around to saying nice things about his former teammate.

“For about three or four years, I don’t think there was a better player in the NHL,” he said, adding that it was a “true honour” to play with him.

Even if he couldn’t skate backwards.

Game 7 against the Canucks in 2004, was one of Iginla’s finest games – scoring two goals in regulation and setting up another in overtime. It was part of a magical run that spring – Iginla called it the most fun season of his career – that nearly ended in a Stanley Cup.

Iggy, it was an absolute privilege and honour to have you wear the Flaming C for 16 seasons.#ThankYouIggy pic.twitter.com/kTSR4kenoh