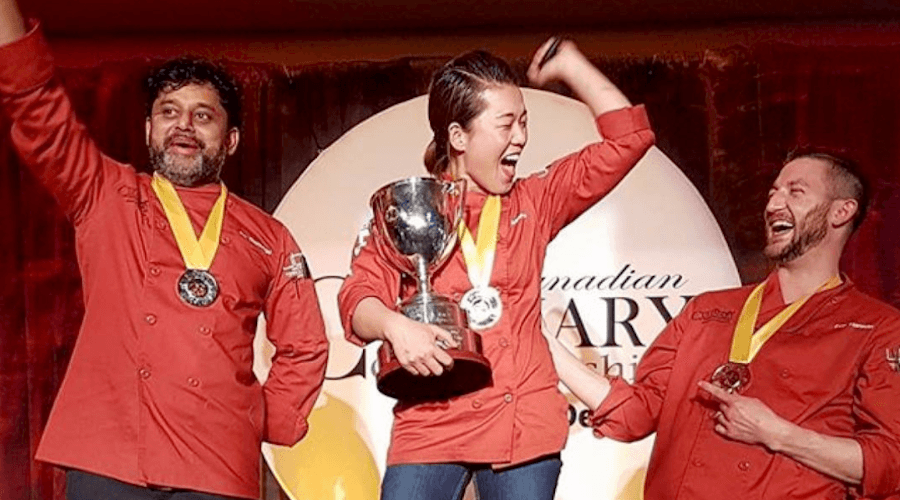 All hail the champion: Calgary’s Chef Jinhee Lee of Foreign Concept took the Gold this past weekend in the prestigious Canadian Culinary Championships.

The exciting annual competition took place in Kelowna, BC, and pitted top chefs from each of 11 cities across the country in an intense battle for the podium.

Lee, representing Calgary, was no stranger to the competition; she helped mentor Duncan Ly of Foreign Concept land a silver in the 2014 Canadian Culinary Championships when he was behind the stoves at Calgary’s Yellow Door Bistro.

For 2017, Ly graciously served as Lee’s sous chef in the competition.

The Canadian Culinary Championships were created with a goal to celebrate Canadian excellence in food, wine, athletic achievement and entertainment. To that end, the event acts as a fundraiser for Canadian Olympic athletes.

Lee has worked closely with Ly for several years. The South Korea-born Lee was Chef de Cuisine at Raw Bar, and is Executive Chef at Foreign Concept. She represented Calgary at the CCC thanks to her 2016 win in Calgary’s Gold Medal Plates. In 2015, she took silver in that same Calgary competition. She’s the first woman to win gold since Chef Melissa Craig won in 2007.

Taking the Silver  this year was Joe Thottungal of Ottawa’s Coconut Lagoon, and Bronze went to Eric Hanson of Edmonton’s Prairie Noodle Shop.