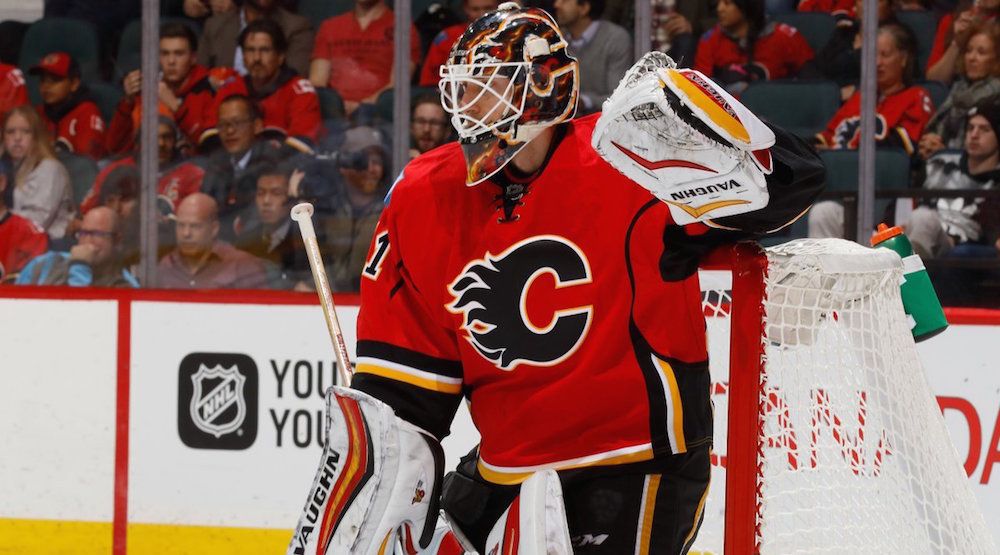 The perfect word to describe the first week of the Calgary Flames’ 2016-17 season: mixed.

Big off-season acquisition Brian Elliott has struggled to begin his career in Calgary, allowing 10 goals over the season-opening series against the Edmonton Oilers.

The Flames also struggled on the defensive side of the puck in both of those games so the blame can’t be squarely placed on the veteran netminder, but head coach Glen Gulutzan decided a change needed to be made between the pipes.

Calgary native Chad Johnson made his first start for his hometown team last Saturday against the Vancouver Canucks. Johnson was solid, something to be expected given his season last year in Buffalo.

With starter Robin Lehner going down with a season-derailing ankle injury last year, Johnson was forced into a starters role for the first time in his career and flourished on a young Sabres team. In 45 games with the team, Johnson put up a 2.36 GAA and .920 save percentage, while posting a winning record of 22-16-1.

The Flames saw an opportunity to commit to Johnson as their full backup this year, and signed their native son to a one-year deal worth $1.7 million.

Despite falling 2-1 in a shootout to the Canucks, Johnson’s play was widely applauded as he stopped 30 of 31 shots he faced. This included over 56 minutes of shutout play, before allowing the game-tying goal on a shot from Vancouver’s Daniel Sedin.

This strong play convinced Gulutzan to start Johnson for Calgary’s home game on Tuesday against the Buffalo Sabres, the very team Johnson starred for last season.

Overall, it was a quiet evening for Johnson in the Flames net as he only faced 21 shots in total and allowed three goals during regulation.

But, Johnson was sturdy enough for Calgary to pick up the two points in overtime courtesy of Sean Monahan.

"We want to build off this and use this as momentum." – Chad Johnson pic.twitter.com/R1Z11UTzJv

Chances are neither Elliott nor Johnson will be contenders for the Vezina Trophy this year, but even league-average goaltending this season should provide a chance for Calgary’s scorers to win games this year.

The sample size is still small, but it will be interesting to see if Johnson will be able to put some pressure on Elliott for the number one job in Calgary. Chances are unlikely as Elliott has a more proven track record and may have just hit a few tough outings, but it could be a major storyline to follow throughout the season.

After a pair of rough games against the Oilers to start the season, it’s good to see many from Flames nation return to earth after a few days of panic earlier this week.

As shown in the games against the Canucks and Sabres, the Flames are better than their results in their season-opening matchup.

This doesn’t mean Calgary is out of the woods however, as puck possession and turnovers remain a concern defensively with Nicklas Grossman and Dennis Wideman giving up the puck a few times during key situations.

Call me an optimist, as the Flames are showing improvement on the ice both in providing offence and bailing out their netminders.

The team will be looking for some chemistry to build on this week as well, as Brian Elliott returns between the pipes tonight versus the Carolina Hurricanes, before the St. Louis Blues visit on Saturday.